As a part of its efforts to help the interested public keep tabs on and understand fiscal and monetary economic policy, the Hutchins Center has provided the following resources: The Fiscal Ship, the Fiscal Impact Measure, the Hutchins Center Explains, the Hutchins Roundup, the Municipal Finance Conference Newsletter, and Janet Yellen’s Dashboard. These resources give an overview of the indicators that policymakers consider as they steer the economy.

The Fiscal Ship challenges you to put the federal budget on a sustainable course. Your mission is to pick from a menu of tax and spending options to reduce the debt from projected levels over the next 25 years. Small changes to spending and taxes won’t suffice. The choices are difficult, but the goal is achievable. But budget decisions aren’t only about fiscal sustainability. They also shape the kind of country we live in. To win the game, you need to find a combination of policies that match your values and priorities AND set the budget on a sustainable course.

The Hutchins Center Fiscal Impact Measure shows how much fiscal policy adds to or subtracts from overall economic growth. It is a gauge of the contribution of federal, state, and local fiscal policy to near-term changes in the gross domestic product, the tally of all the goods and services produced in the economy. It includes both the direct effects of government purchases as well as the more indirect effects of government taxes and government transfers. When FIM is positive, the government is contributing to real GDP growth, and when it is negative, it is subtracting from it. 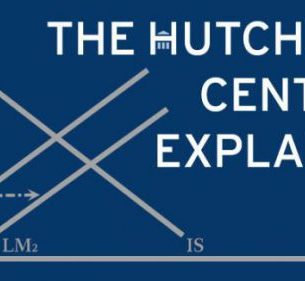 The Hutchins Roundup is a weekly curated newsletter, which includes a concise summary of three new and noteworthy economics papers, a notable quote, and an interesting chart.

Explore the Hutchins Roundup series»｜Sign up to receive future Roundups»

Once a quarter, Federal Reserve Chair Janet Yellen and her colleagues look at their dashboard to see where the economy has been and make projections for where they think it’s going. The dashboard shows a dozen of the most important measures of the economy’s vigor as the Fed tries to steer it toward its statutory goals of maximum sustainable employment and price stability. This interactive shows you what the Fed Chair sees as she makes predictions for unemployment, inflation, growth and interest rates.

As of December 2015, Janet Yellen’s Fiscal Dashboard has been retired, and is no longer updated.