Today’s global marketplace provides fertile ground for commerce, but also presents corruption risks which can be dangerous and costly. In 2014, the World Economic Forum estimated that the cost of corruption amounted to more than 5% of global GDP and led to a 10% increase in the cost of doing business on average. Around the world, corporations, governments and NGO’s are developing partnerships to combat corruption and increase business transparency. Looking at the specific case of natural resource management and development, what are roadblocks to good governance and how can all the sectors of society work together to overcome them?

On September 29, Governance Studies at Brookings hosted a forum to address these issues and offered recommendations for future actions. A panel of experts discussed best practices and highlighted the work of transparency and other initiatives that jointly engage all parts of society in this arena. 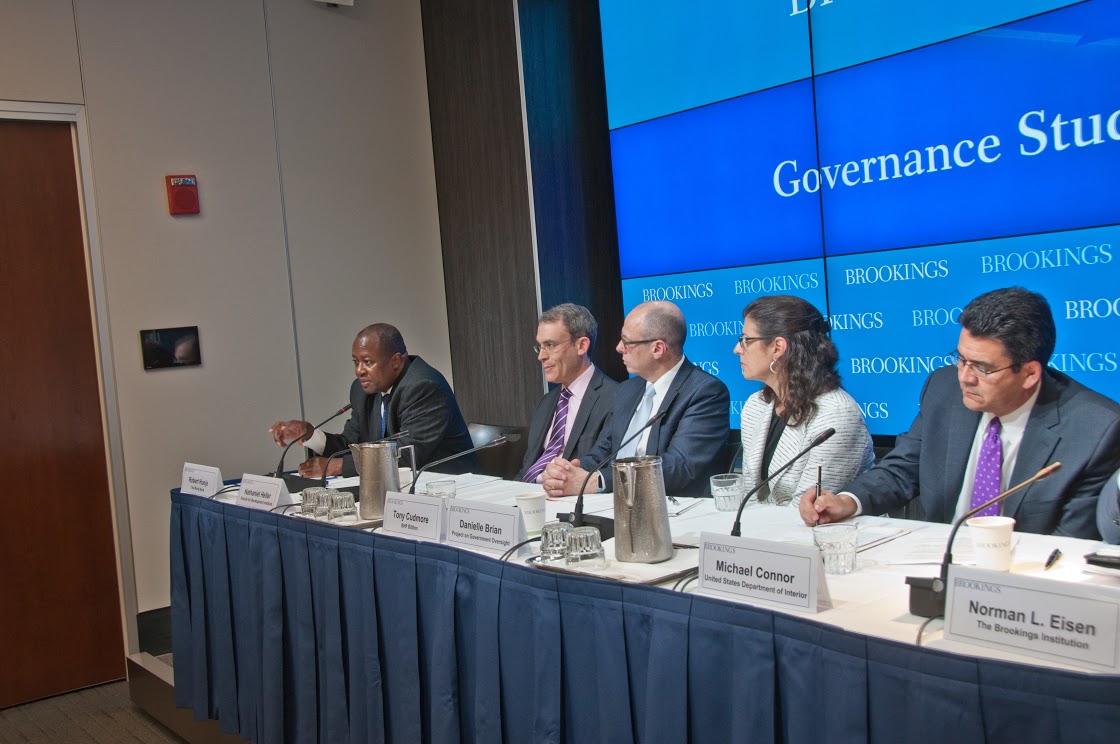 The Extractive Industries Transparency Initiative (EITI) was a recurring topic throughout the duration of the session. EITI is a set of standards for ensuring that world governments manage their natural resources in an open and accountable way. These standards were developed to help curb the corruption that so often develops in governments where natural resources are managed poorly. Deputy Secretary of the Interior Michael Connor and Danielle Brian of the Project on Government Oversight specifically highlighted the Department of Interior’s Minerals Management Service, which had a sordid history with corrupt practices and ethical breaches before being reorganized into three separate agencies in 2010, as a domestic example of just how wrong things can go when the business of government is conducted in the shadows.

Robert Hunja, director of Public Integrity and Openness at the World Bank, added in a global perspective. Having worked closely with governments on the African continent, Hunja shared his optimism that properly managed natural resources had the potential to help advance the continent’s development goals. However, he also warned that the consequences of poor management and limited transparency go far beyond the salacious activity at MMS, frequently resulting in conflict and war.

Tony Cudmore of BHP Billiton offered a perspective from the natural resource production industry, arguing that transparency was also essential from the industry side of the equation in order to ensure that global natural resources are allocated effectively. Additionally, greater transparency allows citizens to determine whether the revenue their governments receive from industry is ethically and appropriately used to benefit the citizenry of the country in which the industry operates.

Taken together, the comments of the panelists all point to a widely applicable principle that is relevant beyond the realm of natural resource management. As stated by Robert Hunja and then expanded upon by Nathaniel Heller, managing director of the Results for Development Institute, “Transparency itself is important, but making it have meaning is a nontrivial exercise”. Any potential improvements to governance that result from increased transparency and accountability, Heller argues, are only valuable if those improvements are utilized in a way that creates a net benefit for society.

Beyond effective natural resource management, the major takeaway of the panel was that increasing transparency and accountability is only one step. To truly promote good governance and fight corruption, governments must recognize that increased transparency yields the specific resource of information. That information must then be stewarded well, and followed with diligent, effective, and informed action.

On September 29, Governance Studies at Brookings hosted a forum to address good governance and fighting corruption and offer recommendations for future actions. A panel of experts discussed best practices and highlighted the work of transparency and other initiatives that jointly engage all parts of society in this arena.