Debt and rent moratoria or deferrals, potentially subsidized by taxpayers, are among a range of policies that could help small businesses avoid unnecessary failures because of the COVID-19 recession, suggests a paper discussed at the Brookings Papers on Economic Activity (BPEA) conference on September 24.

“Restructuring subsidies and payment deferrals are options that are especially suited for small businesses and should be targeted at them,” write Robin Greenwood of Harvard University, Ben Iverson of Brigham Young University, and David Thesmar of the Massachusetts Institute of Technology. But they note that just under a half a million establishments close each year even in ordinary times and caution, “these programs must be carefully tailored to avoid subsidizing a large number of firms.”

In Sizing up corporate restructuring in the COVID crisis, the authors estimate the pandemic’s impact on firm profits and revenues so far is comparable to the worst quarter of the 2008-2009 financial crisis. They project that bankruptcy filings will increase by as much as 140 percent this year compared with last year.

Bankruptcies already have increased sharply for the largest companies in industries such as energy and retailing that were in distress before the pandemic struck. But, so far, filings by smaller firms (with fewer than 100 employees) have changed little, in part because of government programs such as the now-expired Paycheck Protection Program (PPP), which provided forgivable loans (effectively, grants) to small businesses. However, based on private forecasters’ unemployment rate predictions and the historical relationship between unemployment rates and bankruptcies, the lull in small firm bankruptcies could be “the calm before the storm,” they write.

Small firm bankruptcies are especially worrisome, the authors write. Typically, they close, and their assets are liquidated through Chapter 7 of the U.S. Bankruptcy Code. In contrast, large firms typically restructure under Chapter 11, allowing all or part of the business to continue with debtor-in-possession financing. They authors expect debtor-in-possession financing to remain adequate but said it should be monitored closely as the pandemic lengthens. 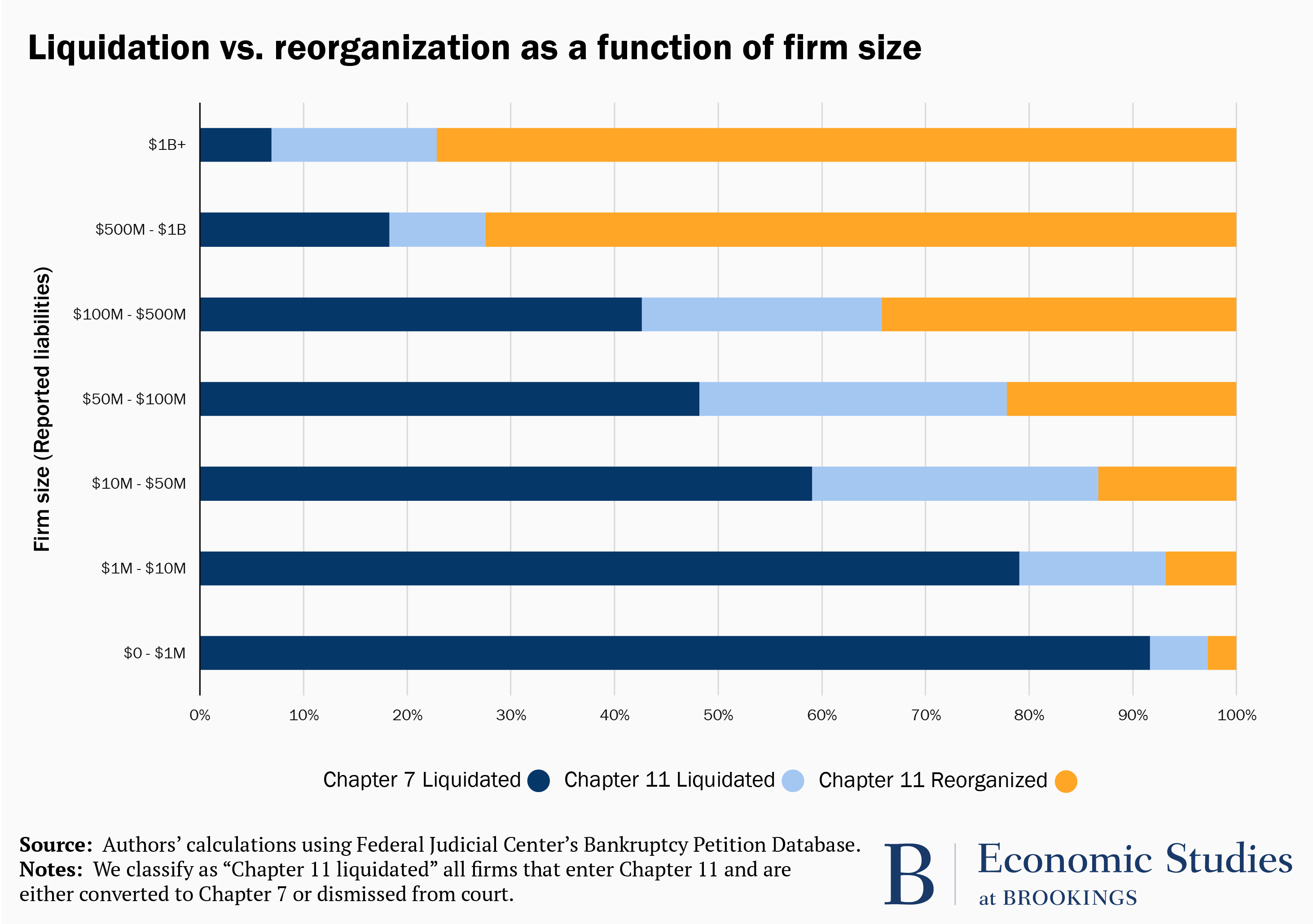 They explore a range of options to deal with small firm bankruptcies, including increased use of Subchapter 5, a new provision that took effect only in February. It offers a streamlined process for small firms to restructure rather than close. As of June, only 506 businesses had filed under Subchapter 5 and the authors recommend monitoring its use and, if necessary, making changes to increase its effectiveness.

Another approach would provide tax credits to partially compensate lenders for accepting haircuts on small business loans or landlords for suspending rent. That would be less onerous for lenders and landlords than simply ordering them to forgive loans and rents but cheaper for the government than straight-out grants to small businesses.

“The government has paid a lot already through the PPP, etcetera, so now private investors should pay their share,” Thesmar said in an interview with Brookings.

A wave of small business loan defaults and restructuring would have only modest effects on commercial banks, the authors estimate, since loans to small and medium-sized enterprises are only a small fraction of banks’ assets, particularly large banks. Many small business loans now are provided by non-bank lenders, who repackage them into longer-term securities held by investors as part of diversified portfolios, Thesmar said.

The authors also warn that the coming surge of bankruptcies could increase the caseload of the nation’s 349 bankruptcy judges by 158 percent from last year’s level—well beyond the caseloads seen in 2009 and 2010. Temporarily recalling between 50 and 250 retired judges, or hiring new judges, could ensure the workload per judge does not increase by more than it did during the financial crisis, they write.