If there is an equivalent of  “Groundhog Day” in the legislative arena, it may be the semi-annual exercise to defer the physician payment rate cuts called for in Medicare’s Sustainable Growth Rate (SGR) legislation. Ever since 2003, Congress has legislated an alternative to the automatic cuts scheduled under the law. This time, absent legislative action, payments to physicians under Medicare will but cut by 21.2 percent starting in April.

Last year, the three Congressional committees with jurisdiction over Medicare came together on a bipartisan, bicameral plan to fix the flawed system permanently. The remainder of this post explains just what is behind this decade of “kicking the can down the road.”

For more details on how the Medicare SGR bill can be enhanced through alternative payment models,  we recommend reading, “

to the House Committee on Energy and Commerce Subcommittee on Health from January 21.

What is the Medicare Sustainable Growth Rate?

Put in place through the Balanced Budget Act of 1997, the SGR is a system designed to control the costs of Medicare payments for physicians. The SGR formula was aimed at limiting the annual increase in cost per Medicare beneficiary to the growth in the national economy. The SGR is layered on top of a system for paying physicians known as a “physician fee schedule,” which pays physicians for delivering a number of individual Medicare services (“volume”), rather than for quality or keeping people healthy (“value”).

Under the SGR formula, if overall physician costs exceed target expenditures, this triggers an across-the-board reduction in payments. The target is based on spending growth in the economy – that’s where the “sustainable” part of the name comes from – but is not tied to quality or access to care. This year, if Congress does not act by March 31, then payments to Medicare physicians would be reduced by 21.2 percent. However, since 2002, Congress has stepped in with short-term legislation (often referred to as the “doc fix”) to avert the payment reduction. These patches have kept increases in physician payments below inflation over time, and have also resulted in a huge divergence between the actual level of Medicare physician-related spending and the target in the SGR formula. Consequently, the budgetary cost of permanently fixing the SGR now runs over a hundred billion dollars. For years it has been clear that both the SGR and physician payment system urgently need attention.

Why is the SGR such a significant problem?

Several important consequences of this outdated and inefficient process are described below. Overall, the SGR:

Disregards individual and group performance. Because the SGR is merely a system of budget controls it does nothing to give an individuals or physician groups any incentives for performing more efficiently. Regardless of how poorly or how well physicians may do on quality or efficiency of care they are nonetheless subject to the aggregate cut.

Makes physician payments uncertain every year. The instability caused by the threat of payment cuts is detrimental to Medicare physicians and the program. While the formula has been bypassed, it is difficult for clinicians to plan for the future, let alone have the certainty they need to reform and improve care.

Distracts from other legislative priorities. Preparing annual legislation to avoid falling off the SGR cliff chews up valuable Congressional time. Congress has so little time and so much else to do that an annual SGR patch diverts attention from other important issues including implementing better payment models.

Defers program improvements. The high cost of permanent repeal – in the range of $150 billion over ten years — has effectively locked us in to a pattern of annual extensions that has thus far stymied Congressional reform efforts.

Presents a threat to health of seniors. Although surveys have not shown significant deterioration in beneficiary access at the national level, the standard for payment in Medicare should not be whether or not problems of access to care have reached a substantial level.

How did we get in this mess?

It is important to remember that the SGR was an attempt by Congress to address a very real problem:  the underlying physician payment system pays physicians for providing more, not better care. Previous efforts at controlling the cost of  physician spending in Medicare had proven ineffective and so in 1997 Congress adopted the SGR formula.

Recall that the formula ties physician payments to growth in the national economy. In the late 90s, while economic growth was high and medical cost growth was low, the system produced increases in physician payments and no cuts were necessary. In 2001, however, the combination of a recession (declining GDP) and increasing medical costs led to an automatic cut of 4.8 percent in 2002, and each year thereafter.

This also exacerbated the problem because of the cumulative nature of the SGR. To minimize the budgetary impact of the “doc fix”, Congress actually increased the reduction in succeeding years to make up for the cost of the fix in the current year. For example, if the formula called for two years of five percent cuts, Congress instead legislated one year of no cut and one year of a ten percent cut. This approach has led to the looming 21.2 percent cut.

Why does SGR cost so much?

Under current law, physician payments are scheduled to be reduced. Measured against that “baseline” of spending, the legislative action to maintain current payments does score as a cost. However, Congress also operates under a requirement to pay for the costs of new legislation so most SGR extensions have included adjustments to other health related payments, such as an extension of the Medicare sequester. So in that sense, the SGR has functioned to create pressure to hold down costs, just not in the way the SGR formula intended.

Moreover, the need to offset spending has led to a squeeze on physician payment rates over the past dozen or so years. Figure 1 below compares the Medicare Economic Index (MEI), a measure of physician practice cost inflation, to the actual SGR updates from 1992 through the scheduled 2015 changes. At points in the past the annual updates for physician payments greatly exceeded the MEI, but since about 2001, they have generally been below the MEI. So while the formula has not operated as it was designed since 2002 it has placed significant limits on increases in reimbursement for physician services. 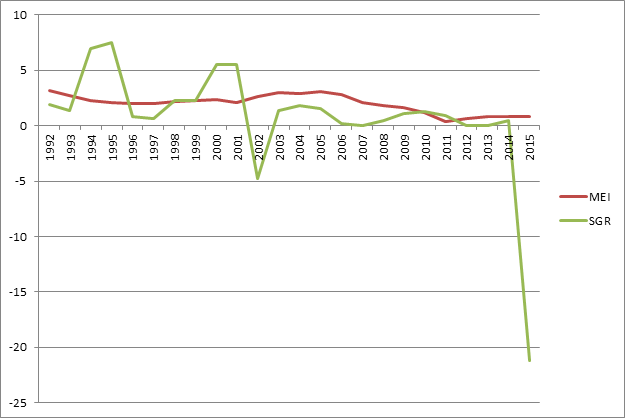 How can we permanently fix this flawed system?

The most important thing we can do to continue to push health reform forward is to move away from our current “fee for service” system. Instead, we must transition to payment models that involve greater accountability for providers for the quality and cost of the care they deliver. A more effective payment system would recognize that physician decisions have significant impacts on overall health care costs, and better support physicians to make improvements in the delivery of care. In addition, many services that physicians provide – from responding to emails, to helping patients develop care plans– are not supported by the current fee-for-service payment system. Last year’s tri-committee bill was developed around a proposal to replace the SGR with a new system that supported “alternative payment models”, such as Accountable Care Organizations (ACOs), bundled payments and patient-centered medical homes.  Though it could be improved, this legislation is a good start. For more information on the implementation of alternative payment models, read our Medicare reform health policy brief.

What is the potential for actually getting something done?

This is a huge challenge. The cost of last year’s legislation is in the range of $150 billion over ten years.  And unfortunately there has been virtually no discussion of how to pay for it.  Elsewhere, we wrote about how to pay for a permanent SGR fix, and suggested that if such a discussion proves to be too challenging, then Congress should consider a semi-permanent fix in the three to five year range. It is critical that physicians have a period of stability and incentives to invest in the management tools that will help them move away from the current, inefficient, fee for service models.

With a new Congress it remains to be seen how this will proceed. There are new Chairmen in two of the major committees – House Ways and Means and Senate Finance. While they support reforming the SGR system it is possible that they will want to review last year’s legislation and consider changes. With the current “patch” expiring in March, some action will have to be taken quickly to avoid precipitous payment cuts. Because there is little time before then to develop consensus around the legislation and how to pay for it, the odds again favor some sort of further short term extension. But this could be done in a way that facilitates a permanent or semi-permanent fix soon, perhaps in this Congress. If Congress, adopts a new budget and moves to implement it, it is quite possible SGR will be included as one of those items. That process, however, can take several months to unfold.