While declining summer employment is part of the story, the bulk of the teenage reduction in labor force participation comes from fewer teenagers being jointly enrolled in school and participating in the labor force during the academic year. We find that—despite the low teen share of the working-age population (8 percent)—if teens had still participated in the labor force at their 2000 rates, aggregate 16–64-year-old participation would be more than 1.3 percentage points higher.

Many factors are at play in the decline of teen labor force participation, including increased school enrollment, seasonal employment, decreased returns to work, reduced demand for low-wage work, minimum wage hikes, and competition from older workers or immigrants. Time pressure is another driver of reduced teen participation. Teens have many demands on their time and those demands fundamentally differ between the academic year and summer.

School is not out for the summer

It is striking how the labor market behavior of teens deviates from that of other age groups. The teen labor force participation rate reached an all-time peak in 1979 (57.9 percent) and gradually declined until about 2000, when it then dropped precipitously to a 2010–18 plateau of about 35 percent (figure 1). While the participation rate of prime-age workers (25- to 54-year-olds) has edged down since its peak in the late 1990s and older workers’ (55- to 64-year-olds) participation has increased, the scale of the shift in teen participation dwarfs these other changes. 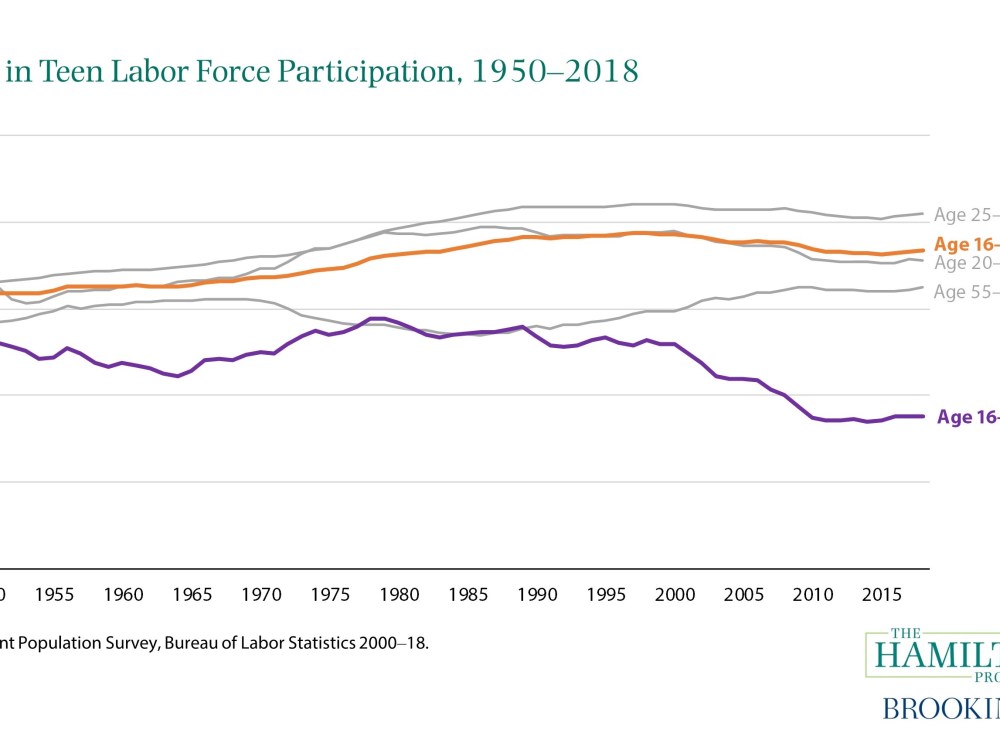 Is the continued rise of older Americans in the workforce necessary for future growth? 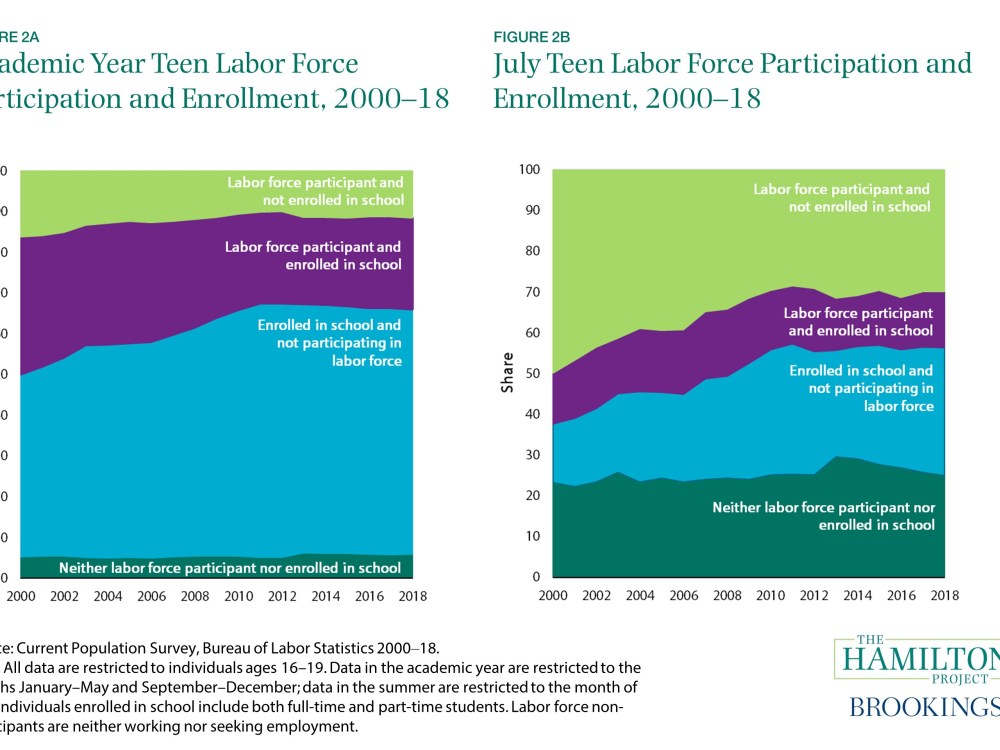 Most teenagers are compelled to be in school during the academic year, but may or may not work at the same time. Figure 2a depicts the decline in teenagers’ academic year (September to May) labor force participation. From 2000 to 2018, the share of teenagers working or seeking work while enrolled in school declined by 11.4 percentage points and the share of teenagers who are only working or seeking work decreased by 4.6 percentage points from 2000 to 2018, amounting to a total decline in teen labor force participation of 15.9 percentage points.

These shifts in labor force participation are borne out in the reasons given for not working or seeking work. From 2000 to 2018, there was a 3.9 percentage point increase during the academic year and a 17.8 percentage point increase during the summer in nonparticipants saying that they were not participating in the labor force because they were students (figures 3a and 3b). We also found it noteworthy that the number of teenagers reporting household responsibilities or “other reasons” has declined while summer school enrollment has increased. 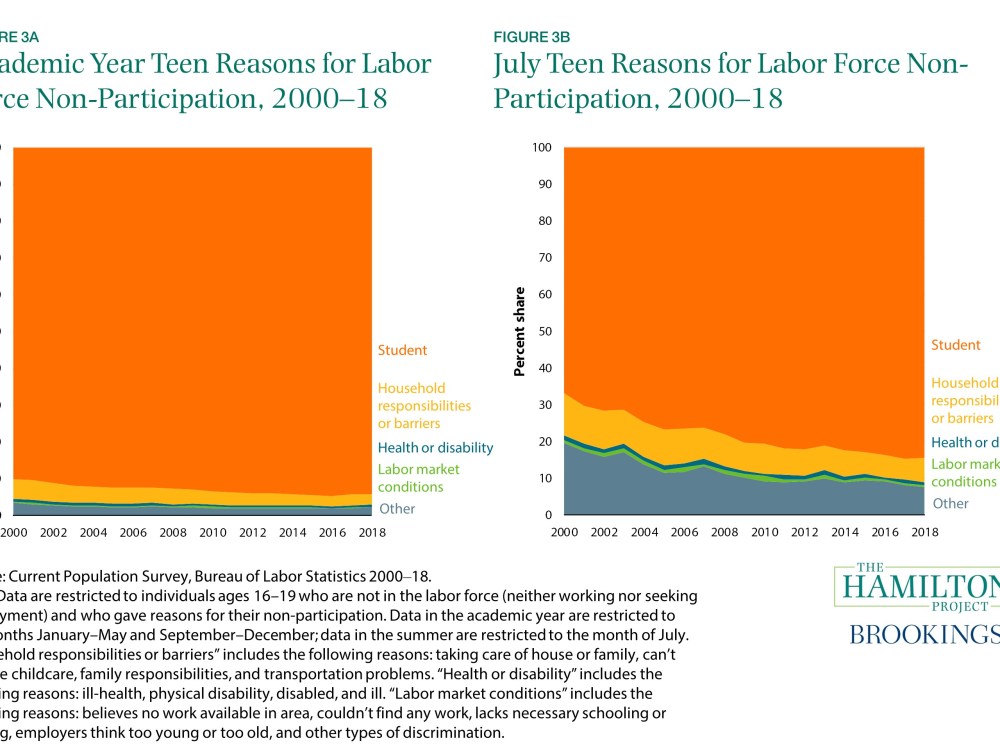 Similarly to Julia Dennett and Alicia Sasser Modestino and Ernie Tedeschi, we find that while teens are less likely to be in labor force they are not substantially more likely to be entirely disconnected (not in employment, education, or training). Teresa Morisi provides some evidence that the intensity of high school may have increased in ways that have helped crowd out non-school activities.

Table 1 shows contributions by age group to changes in the overall labor force participation rate. We calculate how much the change in participation for a given group moved overall participation based on their share of the population in 2018.

In addition to these within age group shifts in participation rates shown in the table, changes in the demographic composition of the labor force also contribute to the decline in aggregate labor force participation, most notably the rising share of Americans aged 55 to 64 who tend to work less than other working-age adults. (There are also technical factors such as microdata weights and the fact that we use July data to stand in for eight weeks of summer that contribute to the change over time in small amounts). 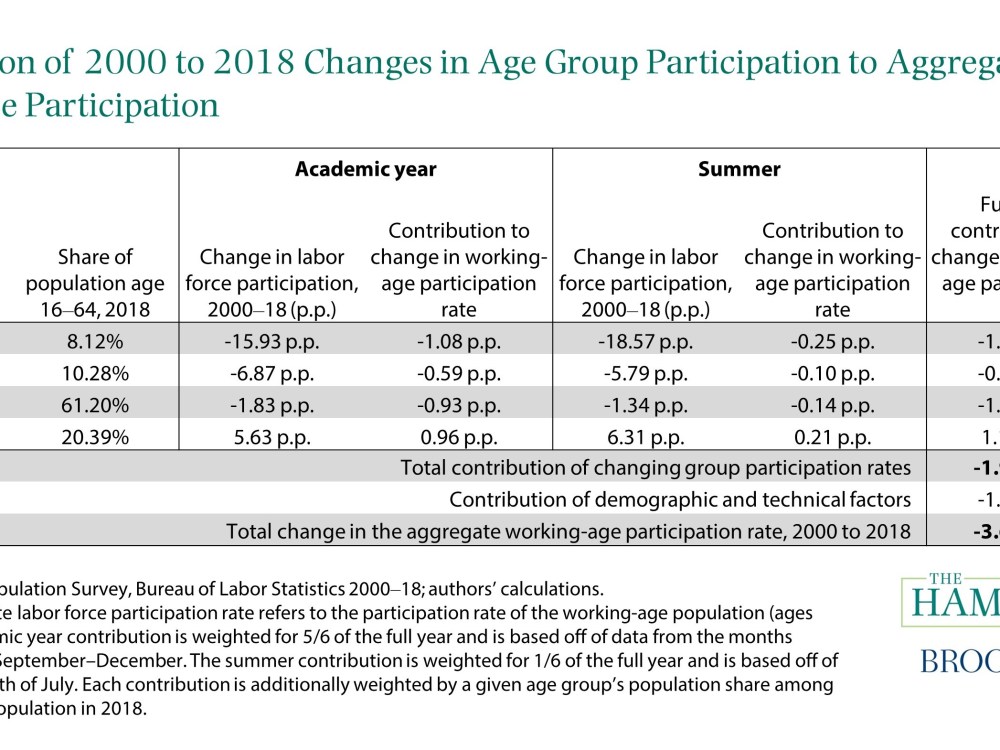