According to a Hamilton Project report released last week, almost one in five children lived in a food insecure household in 2014 – meaning that at some time during the year these households had difficulty providing enough food for all their members due to a lack of resources. A third of these households with children reported very low food security – meaning that at times during the year, the food intake of household members was reduced and their normal eating patterns disrupted because the household lacked money and other resources for food.

This week, a paper published in the journal Obesity reported that in 2013-2014, nearly one in five (17.4%) of American children were obese. Food insecurity and obesity are related, as weight gain is not only symptomatic of excess calories but is a biological response to unpredictable access to food. The highest rates of food insecurity and obesity are among the most vulnerable children, as a recent Hamilton Project report found that more than half of children living below the poverty line struggle with food insecurity, obesity, or both.

“… This is about building a productive economy.  Hungry kids aren’t going to be learning as well as they should. They’re not going to be as well-prepared for the competitive economy that they’re going to grow up in. The reality is that families that are struggling with food insecurity have to make very difficult choices, and it impacts the future of kids, and it impacts the future of this country.”

Puberty is a developmental stage characterized by growth and fueled by food. As any parent of teenagers knows, food consumption increases during this time. These physiological realities are reflected in the new U.S. dietary guidelines released in January 2016, which estimate the calorie needs of teenagers to be on par with that of their parents, and more than three times the needs of younger children. Overall, households with teenagers experience higher rates of food insecurity than households with only younger children (Figure 1). Consider the following sobering statistics: 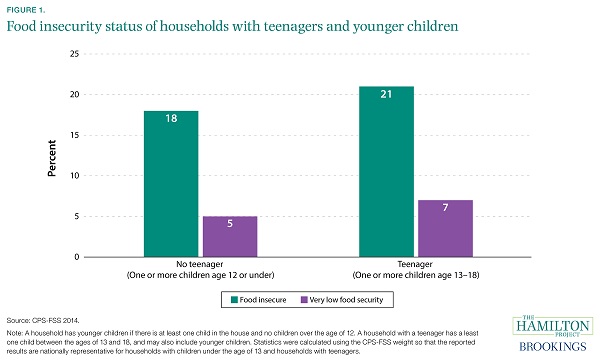 The Supplemental Nutrition Assistance Program (SNAP) and school-based nutrition programs are the primary policy levers to mitigate a poor or insufficient diet and its consequences. Armed with evidence of the adverse consequences of obesity, there has been an overhaul of federal nutrition assistance programs for children in recent years. These reforms, specifically the new nutrition standards for the National School Lunch Program (School Lunch) and the School Breakfast Program (School Breakfast), have addressed some of the factors that impact obesity: portion-control and high quality calories.

However, while some progress has been made on childhood obesity in recent years, more progress is needed toward addressing the needs of food insecure youth—particularly teenagers. The major nutrition support programs either:

Fortunately, an actionable path forward exists to meet the nutritional needs of growing teenagers and their families in nutrition assistance programs. The recent release of the 2015-2020 Dietary Guidelines has triggered an opportunity to better serve teenagers and their families through modifying the Thrifty Food Plan, which sets the maximum SNAP benefit, and the School Lunch and School Breakfast nutrition standards.

While the dietary guidelines treat teenagers like adults, SNAP benefit calculations do not. The maximum SNAP benefit is based on the monthly cost of the USDA’s “Thrifty Food Plan” for a hypothetical (or “reference”) family of two adults and two children under age 12. By USDA’s own calculations, feeding a family of four with two teenage boys would cost $50 more per month than the maximum SNAP benefit available to the family. Many have argued it is time to update the Thrifty Food Plan—to improve dietary quality, and to better align benefits to household need. Reformulating the Thrifty Food Plan with the needs of teens in mind could help to reduce food insecurity and very low food security among recipient households with teenagers by providing additional resources.

Recent experimental evidence shows that modest food support benefits can greatly reduce food insecurity and very low food security. While SNAP is a year-round program, students lose access to School Lunch and School Breakfast when school is not in session. To address this gap, the USDA recently studied the effects of providing $60 monthly in nutrition benefits to children during the summer months. As Figure 2 illustrates, the experimental evidence suggests that providing additional resources substantially reduces food insecurity and very low food security among households and children. 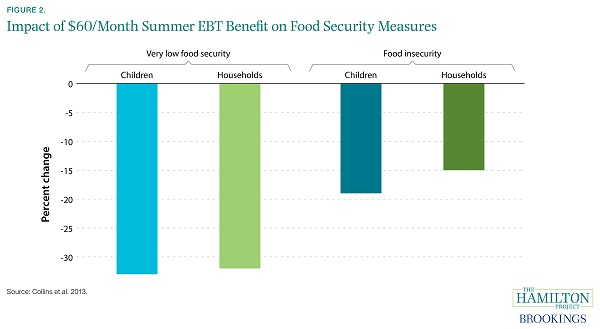 While reformulating the Thrifty Food Plan to better reflect the needs of families with teenagers would help, this measure alone would not be enough to reduce food insecurity among teenagers. Complementary reforms to the school-based nutrition programs would also be necessary, as current iterations of the meal standards for teenagers in the School Lunch and School Breakfast programs may be inadequate.

In 2012, new nutrition standards for the School Lunch and School Breakfast programs were released to reflect the joint emphases of portion-control and better nutrition by setting higher nutritional standards and moving from only a floor to a minimum and a maximum for single meal calorie counts. In the Committee on Nutrition Standards for National School Lunch and Breakfast Programs (Committee) Institute of Medicine (IOM) report, which provided the recommendations for the 2012 revisions to the School Lunch and School Breakfast programs, the Committee wrote that they “agreed to set a maximum target for calories to help limit excessive calorie intake at breakfast and lunch (p. 70).” For an elementary school student, this range is 350-500 calories at breakfast and 550-650 calories at lunch; for a high school student, this range is 450-600 calories for breakfast and 750-850 calories for lunch. 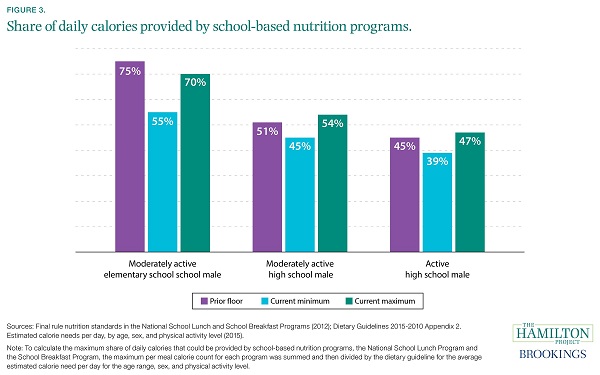 Recent regulations regarding how to serve students in schools where age ranges overlap may further disadvantage teenagers. Because the school meals’ required calorie ranges overlap across age groups, schools that serve both elementary and middle school students could offer the same meal choices to all students if the meals were in the overlap range for calories. For schools with a K-8 grade configuration, younger students would be served meals at the higher end of their calorie range and older students would be served meals at the lower end of their calorie range if schools choose to feed all the children the same meals.

Policies that increase eligibility for school-based nutrition programs, such as the Community Eligibility Provision (CEP), may also help to feed more teenagers by decreasing stigma and increasing participation. The CEP allows schools and school districts located in low-income areas to provide meals to all the students in the school without determining individual eligibility if more than 40% of students in a school or district are directly certified for free meals based on participation in other safety net programs. Current efforts to restrict eligibility for CEP would likely result in decreases in participation and could increase food insecurity.

According to its authorizing legislation, the school nutrition standards and requirements are to be updated in a timely matter to match the new edition of the Dietary Guidelines for Americans, released in January of this year. In the IOM report for the 2012 update, the Committee acknowledged that the new nutrition standards might be insufficient for two groups in particular: children from food-insecure households and teenagers. They wrote:

“The committee recognizes that some children with limited access to food or with substantially higher calorie needs might benefit from school meals that provide significantly more calories (and nutrients). It believes, however, that this situation does not provide the basis for an increase in the maximum calorie levels for school meals. Instead, school food authorities and community organizations have additional mechanisms to help ensure that children have access to sufficient food during the day (p. 71).”

In other words, the goal to combat obesity through the School Lunch and School Breakfast programs was given precedence over its responsibility to feed vulnerable students and growing teenagers sufficiently. In the next round of School Lunch and School Breakfast nutrition standard reforms, particular attention should be paid to the dietary needs of children living in food-insecure households and teenagers. 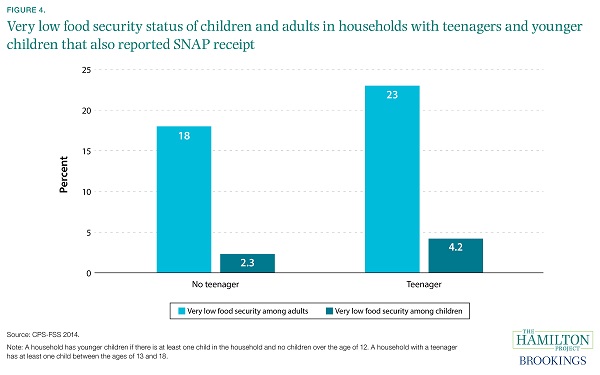 There are also differences in the rates of reported very low food security among children: these are households where a teenager or child was reported to have reduced food intake or disruption to their normal eating patterns because the household lacked money and other resources for food. Among reported recipients of SNAP, households in which the children also qualify for School Lunch and School Breakfast, rates of very low food security among children in households with teenagers are almost double that of households with younger children: 4.2% to 2.3%.

In light of the release of the 2015-2020 Dietary Guidelines that trigger revisions to the Thrifty Food plan and nutrition guidelines for the School Lunch and School Breakfast programs, we highlight opportunities to make improvements to these programs that will better serve teenagers and their families. These include:

The Surgeon General has set a goal to eliminate very low food security among children by 2020. Addressing the nutritional needs of teenagers through reforms to SNAP and the School Lunch and School Breakfast programs are reasonable steps in making progress on this critical goal.

Mapping gun violence: A closer look at the intersection between place and gun homicides in four cities

John Fitzgerald and Robert A. Moffitt
Wednesday, March 23, 2022
Get daily updates from Brookings