Gopi Shah Goda and John B. Shoven of Stanford University, Shanthi Ramnath of the U.S. Treasury, and Sita Nataraj Slavov of George Mason University find that roughly one-third of Social Security beneficiaries claiming benefits before the full retirement age have large enough IRAs to delay claiming benefits for at least two years. This suggests that liquidity constraints are not the primary reason that a large segment of the population claims benefits early. Those claiming early benefits tend to be in worse self-reported health condition, and have higher expected and actual mortality rates, suggesting that expected longevity may influence claiming decisions.

In emerging economies, macroprudential regulations and capital controls are most effective when used together

Amitabh Chandra of Harvard University, Amy Finkelstein and Adam Sacarny of MIT, and Chad Syverson of the University of Chicago find that higher performing hospitals tend to have a larger market share and experience faster growth in market share than do lower-quality hospitals. The relationship between quality and market share is significantly stronger when a higher degree of choice is involved (transfers vs. emergency room visits), suggesting that consumer demand may play a larger role in the allocation of patients to hospitals than was previously thought.

Chart of the week: US health spending far outpaces the rest of the OECD 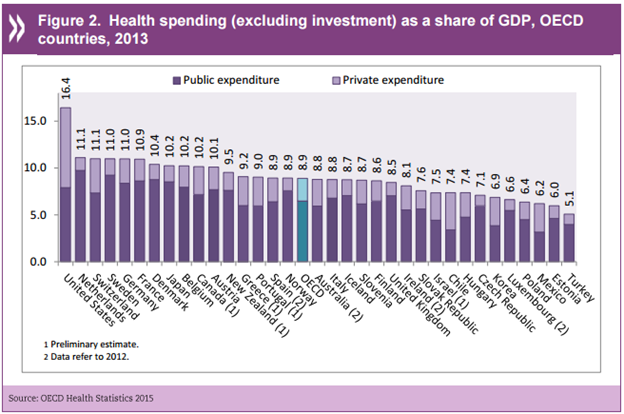 Quote of the week: NY Fed’s Dudley: more research is needed before deciding to implement a system of macroprudential regulations

We have a very complex financial system in the United States. I think we need to do much more work in developing a coherent macroprudential framework before we start contemplating putting a number of countercyclical measures in place. Such a framework needs to take into consideration how it interacts with other policies, such as microprudential policies—to ensure the safety and soundness of individual institutions and monetary policy—designed to help ensure a stable macroeconomy. When are these policies substitutes? When are they complements? How will they interact? How will the governance work in coordinating across these three realms?