As narratives about an evidence agenda for government policy have risen in prominence, advocates of particular policies are increasingly likely to justify their positions based on findings from research.  But they all too frequently, to adapt a line Vin Scully used about sports statistics, use research like a drunk uses a light post: for support rather than illumination.

A significant portion of the mismatch between the evidence that policymakers and practitioners are consuming vs. ought to be consuming is due to deficiencies on the production side of the equation.  The problem isn’t primarily the one that dominated 20 years ago – low supply of high quality, practically relevant research, although a larger supply is still very much needed.  Rather it is the lack of objective, visible, and trusted translation mechanisms between those who are producing high quality evidence and those who consume it.

To address the need to provide consumers of research on education and social policy with regular access to high quality evidence in a consumable form, Brookings, with generous support from USA Funds and the Laura and John Arnold Foundation, is launching under my editorship a new project called Evidence Speaks.  It will take the form of weekly longer reports and shorter notes written by leading researchers and produced for web distribution.

Our first report, released today, tackles the topic of universal preschool.  Advocacy for universal preschool is booming, with the Obama White House proposing last year a new federal expenditure of $66 billion over the next decade to support Preschool for All, with an equivalent match by states – about $120 billion in additional expenditure.

But, do we already have universal Pre-K? We find based on our new analysis of data from the National Center of Education Statistics that 69 percent of the nation’s children who entered kindergarten in the 2010-2011 school year regularly attended a preschool program in the preceding year. This is 14 percent higher than the rate of attendance reported elsewhere.  We also find that rates of attendance vary considerably by the socio-economic status of parents. 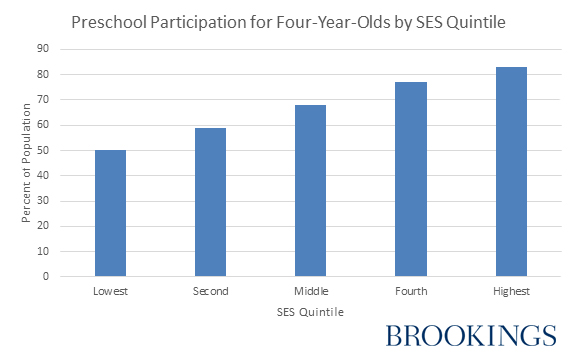 If we assume that families in the top quintile of the distribution of socio-economic status can send their four-year-olds to a regular center-based preschool program if they wish (i.e., programs are available to serve these children and the families can afford the tuition), then the ceiling for attendance of four-year-olds in a publicly funded program is likely to be no higher than it is for high SES families (83% in the ECLS-K:2011), and probably lower based, first, on cultural preferences among some demographic groups for family-based vs. center-based care, and, second, on attendance rates for four-year-olds in the three states that offer universal free pre-k (Georgia = 58%; Florida = 79%; Oklahoma = 74%).

In our report, we model a progressive income-based subsidy in which families in the lowest SES quintile pay nothing for preschool for their four-year-olds; those in the next quintile pay half the costs of attendance; those in the middle quintile pay three quarters of the cost of attendance; and those in the top two quintiles cover all of the tuition costs.  We estimate the additional taxpayer costs of this policy as between $20 and $40 billion over 10 years, a far cry from the Obama administration proposal of $120 billion in additional federal and state expenditure over the next decade to achieve Preschool for All.

Preschool and how to pay for college are going to be the two leading education topics in the 2016 presidential race. Whatever the policy preferences of the candidates, let’s hope they will use the right numbers on present need and will be clear about the nature of the new programs they are proposing and the basis for their projected costs.

These are the types of topics and analyses we’ll be running weekly through Evidence Speaks. We invite you to be among the readers of the series and hope you will find the content worthwhile. Read our first full report here.

The missing piece: Where is ‘education’ in the national conversation?

Who owes all that student debt? And who’d benefit if it were forgiven?