Since ancient times, Greeks have always been wary of facing bad choices. Homer’s Odyssey vividly highlights this predicament with the story of the famous two sea monsters (Scylla and Charybdis) that Jason and his Argonauts had to navigate in order to passing through the Straits of Messina, giving rise to the English idiom of finding oneself between a rock and a hard place.

Today, Greece finds itself in such a position: Faced with crashing against the rocks of further austerity or risk being sucked down the whirlpool of a “Grexit” (abandoning the euro currency). Some notable economist such as Paul Krugman have been enthusiastically advocating for the latter option. They argue the economic consequences of abandoning the euro would actually be positive:  a (much) devaluated drachma would result in Greek goods becoming more competitive to foreign markets, and through a boost in exports, the Greek economy could get back on track. The recovery of Asian countries from the 1997 crisis is usually held up as a good example.

But this argument is misleading for two reasons. First, while devaluation may lead to a short-term boost in exports driven by a cheaper local currency, the devaluation does not assure a productivity increase among Greek firms. Higher inflation will, ultimately, whittle away the gains. Competitiveness driven by productivity growth—not currency devaluation—is what actually stands behind long-term, sustainable growth.

Second, and perhaps more importantly, Greece’s current productive structure does not allow it to quickly expand its export basket. Research at Harvard’s Center for International Development (CID) suggests that a country’s ability to enhance its export basket depends on its initial conditions. Countries are more likely to diversify into new, more sophisticated goods that share “know-how” (e.g. non-tradable inputs, technology, skills, etc.) with goods that are currently being exported. The process of gaining this productive know-how that translates into more and new products is an important part of our research agenda. Research suggests that this process, in fact, is more difficult and lengthy for countries that export few products and, in turn, share very little know-how with other goods.

This is precisely Greece’s situation, as Ricardo Hausmann argues in his piece on Greece inspired by the tools he and his coauthors have developed in The Atlas of Economic Complexity. Here, we delve deeper using these tools to understand this argument. For instance, Figure 1 shows the position of Greece in the “product space”: a network visualization of a country’s exports basket, where each node represents a product (there are about 800 of them) and the links between them represent the intensity of their shared know-how. This visualization shows Greece’s exports in 2013 as those that are color-filled. The size of a node represents the share of a product in Greece’s export basket. 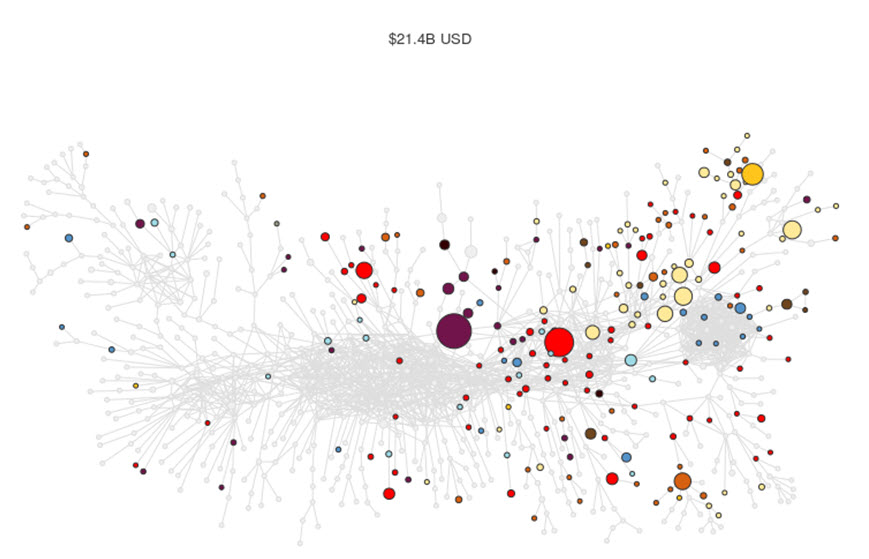 This visualization demonstrates that a big chunk of Greece’s exports are concentrated in very few products. In fact, about 33 percent of their exports are oil-related, and about 40 percent are agricultural goods and basic materials. Besides these few large nodes, the rest are small nodes located mostly in the outskirts of the network’s most dense areas (i.e., they are not located in areas of the network where many products share know-how, such as its center).

For perspective, take a look at another European country with similar income per capita and a similar recent economic experience: Portugal. Figure 2 presents Portugal’s position in the product space. The difference is striking. Portugal is much more diversified and many of its products are located in much denser areas of the network, as compared to Greece. That is, Portugal’s current know-how (as measured by the products the country currently exports) is common to many goods they do not currently export. Thus, this suggests that the likelihood they could add these “nearby” goods to their export basket is higher. 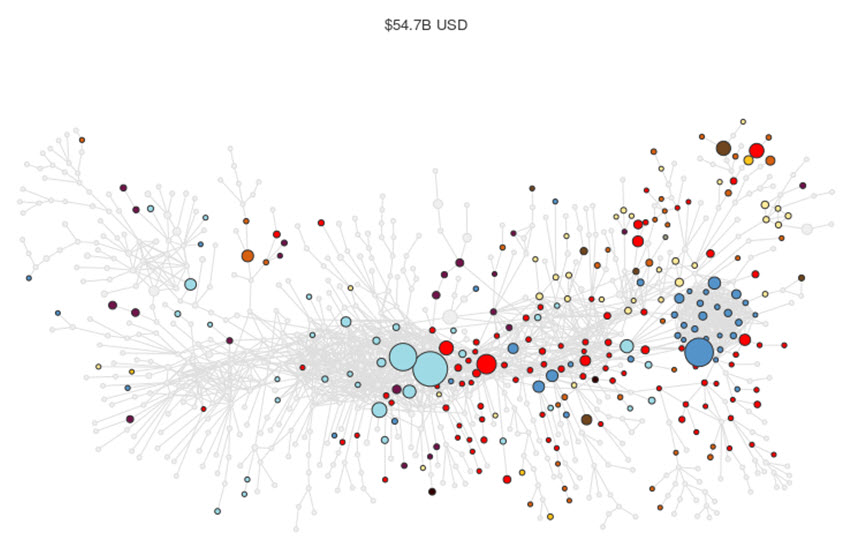 With little opportunity to expand to new and more sophisticated products, devaluation would allow Greece to perhaps wring some growth, but definitely not much, out of its existing export basket.

Krugman may argue that the experience of Asian countries after the 1997 crisis is a case in point for supporting a Grexit and an inevitable devaluation. But the truth is that the initial condition of Greece today and that of Asian countries pre-1997 is strikingly different. Figure 3 plots Harvard CID’s “Economic Complexity Index” on the vertical axis versus the GDP per capital in the horizontal axis (after controlling for natural resource rents). The Economic Complexity Index measures the accumulated productive know-how of a country based on the sophistication of its export basket. The left panel compares Greece (in red) to its European peers (in blue) using 2013 data. Greece’s productive know-how corresponds to a much lower GDP per capita, far below that of its peers, even after years of economic contraction. It effectively has an export basket with similar sophistication to that of Tunisia supporting a lifestyle like Sweden.

Figure 3: Productive Knowhow vs GDP per capita (after controlling for natural resource rents) 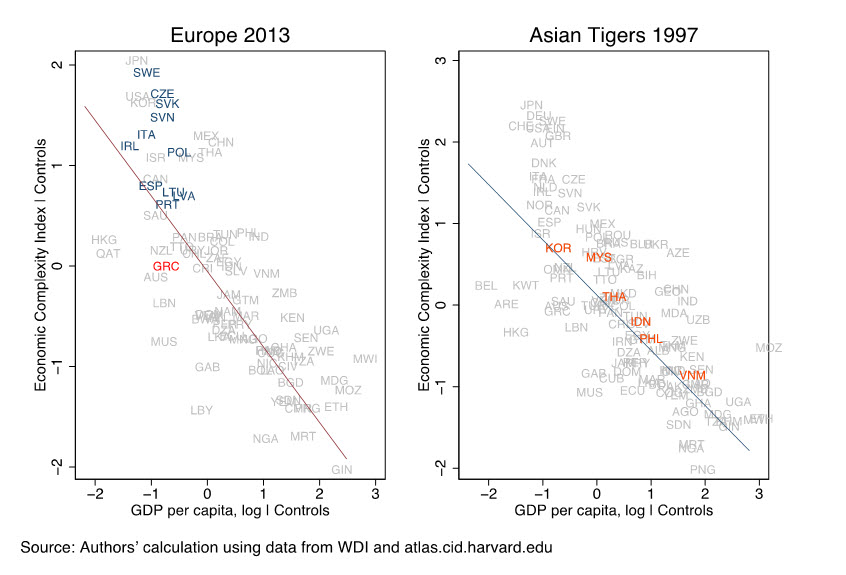 The right panel of Figure 3 plots the Asian countries during the 1997 crisis. Most countries had more productive know-how than their GDP per capita would have suggested. This means that, unlike Greece, they had enough productive know-how to raise their standard of living. In such a case, the devaluation provided the necessary push to achieve this potential.

Between a rock and a hard place

Our pessimistic view of Greece’s current productive structure significantly reduces the benefits of currency devaluation. However, the negative consequences of a Grexit could be immense. Jeffry Sachs recently set it out in no uncertain terms:

“Indeed, a euro exit would be remarkably costly for Greece, and would almost certainly create political and social chaos—and perhaps even hyperinflation—in the heart of Europe. The value of Greek residents’ savings would be slashed, as euros were suddenly converted into New Drachmas. The middle class would be eviscerated. And the currency conversion would not save the country one cent with regard to its external debt, which would, of course, remain denominated in euros.”

Greeks would do well to block their ears to the sweet songs of Sirens like of those supporting a Grexit. Unfortunately, there are no quick and easy paths back to economic prosperity from their current morass. Like the Argonauts on their dangerous voyage, they need to cautiously navigate between the monsters of both austerity and Grexit; not throw caution to the wind and enthusiastically embrace them.

Michael Kransdorff is a macro strategist at Cardano in London but writes in his personal capacity.

Italy loses Draghi as its leader — for now

A German gas crisis will cause jitters across Europe