Using corporate tax return data from 1996 to 2008, Danny Yagan of the University of California, Berkeley finds that the 2003 dividend tax cut neither boosted corporate investment nor employee compensation, in contrast to what he claims the legislation was intended to do. Instead, the tax cut led to an increase in corporate payouts to shareholders.

Dimitris Christelis of the Center for Studies in Economics and Finance, Dimitris Georgarakos of Goethe University Frankfurt, and Tullio Jappelli of the University of Naples Federico II find that for every 10% loss in housing and financial wealth during the Great Recession, household spending dropped by 0.56% and 0.9%, respectively. They also note that that those who lost their jobs reduced household spending by an additional 10% on average.

When deciding when to cut spending, the timing of fiscal multipliers matters most

Kevin Fletcher and Damiano Sandri of the International Monetary Fund argue that when deciding whether or not to delay fiscal consolidation, the current size of fiscal multipliers should not be the primary consideration. Instead, the difference between current and future multipliers should be the greatest concern. If current multipliers are higher than those in the future, delaying fiscal consolidation is beneficial, but if the multipliers are constant over time, there is no significant advantage to delaying.

Chart of the week: Income inequality 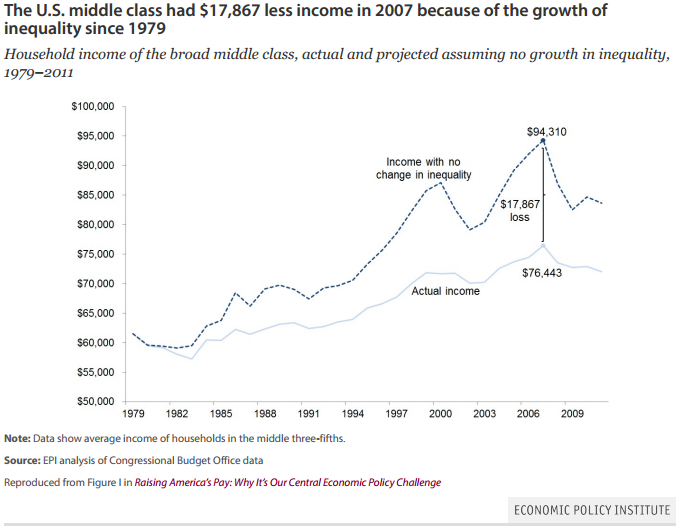 Quote of the week: While other forms of household indebtedness fell from 2008-2013, student loan debt “bucked the trend” and continued to grow