Òscar Jordà of the Federal Reserve Bank of San Francisco, Moritz HP. Schularick of the University of Bonn, and Alan M. Taylor of the University of California, Davis, find that, by creating mortgage and housing price booms, looser monetary policies increase the probability of future financial crises. They say this relationship has strengthened since World War II.

Hans Holter of University of Oslo, Dirk Krueger of University of Pennsylvania, and Serhiy Stepanchuk of École polytechnique de Lausanne argue that as income tax progressivity rises, the maximum sustainable debt level for a country falls. Specifically, they conclude that if the United States were to adopt Danish-style progressivity (the highest in the OECD), the  maximum  sustainable debt level would be less than 250% of GDP, compared to 350% if it were to adopt a flat income tax.

Chart of the week: After a sharp dip in profits in 2014, Fannie Mae and Freddie Mac are more profitable than before the financial crisis. 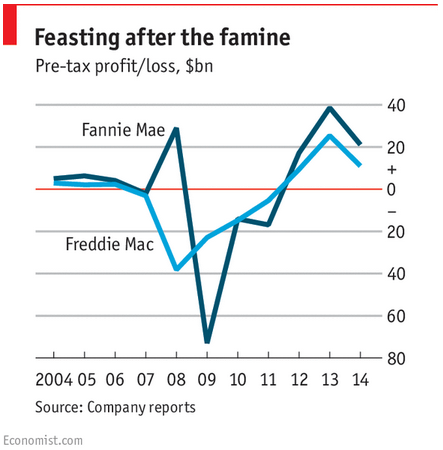 Quote of the week: Central bankers should set a high bar for interfering in the market

“[F]inancial stability need not seek to eliminate all risks. We need to learn, but not overlearn, the lessons of the crisis. I believe there should be a high bar for “leaning against the credit cycle” in the absence of credible threats to the core or the reemergence of run-prone funding structures. In my view, the Fed and other prudential and market regulators should resist interfering with the role of markets in allocating capital to issuers and risk to investors unless the case for doing so is strong and the available tools can achieve the objective in a targeted manner and with a high degree of confidence.”

–Jerome Powell, Member of the Federal Reserve Board of Governors