In its latest report on the budget outlook, the Congressional Budget Office projects that net Medicare expenditures will increase from 2.9 percent of GDP in 2015 to 3.6 percent of GDP by 2025—an almost 25 percent increase in the share of GDP allocated to Medicare.

But all of this increase can be accounted for by the aging of the baby boom generation: the total number of Medicare beneficiaries is projected to climb about 35 percent in the next 10 years, from 54 million in 2014 to 73 million in 2025.

CBO reports that, after adjusting for inflation, Medicare spending per beneficiary is projected to rise only 1.2 percent per year over the next ten years, well short of the 1.5 percent per year increase in real per capita GDP projected.   This remarkably slow growth in Medicare spending stems from a number of factors, including a reduction in the average age of the Medicare population (reflecting the influx of baby boomers) and payment cuts to providers–particularly physicians, who are slated to receive a 20 percent pay cut this April.

But another important factor is the phenomenally slow growth in Medicare spending in recent years, as shown below.  Although some of this slowdown is well understood—reflecting payment cuts under the Affordable Care Act and the expiration of patents of a number of blockbuster drugs—much of the slowdown in Medicare spending is not understood by analysts.  CBO’s research suggests that the Medicare slowdown does not appear to be attributable to the recession, and my work, using a variety of data sources, concurs. 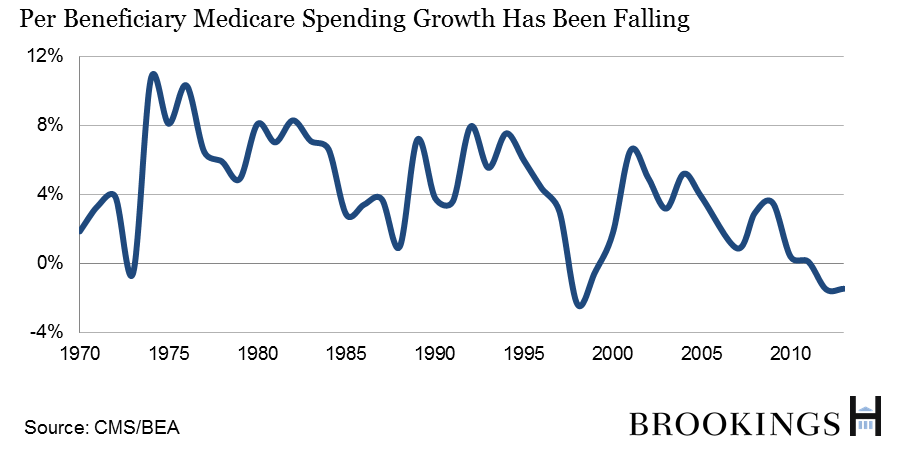 CBO has made the not-unreasonable assumption that this slowdown will persist for some time.  But, because we don’t understand why Medicare spending has slowed, this assumption must be viewed as highly uncertain.  It is possible that, rather than persisting, the slowdown could reverse itself, and spending growth could surprise us on the upside in coming years.

For a simple explanation of the implication of health spending growth for the sustainability of the federal budget, see my new, short video: