The first high-level talks between Cuba and the United States in 35 years were held this week in Havana and migration emerged as a contentious issue. Cuban officials urged the American delegation to end its policy of allowing Cubans who reach U.S. soil to stay as refugees, saying it is a dangerous enticement. U.S. officials maintained that the policy will remain in effect.

Many Cubans seeking entry to the United States attempt to arrive without permission by sea, facing dangerous conditions often in rickety craft. Those who make it are admitted to the United States, and may apply for legal permanent residency one year later. Those stopped at sea by the U.S. Coast Guard are screened to see if they meet refugee requirements. If so, they are sent to a third country; if not, they are returned to Cuba.

This “wet-foot, dry-foot” policy has been in place since agreements dating to the “Balsero” migration of 1994 and 1995, and will remain in effect unless Congress acts to change it. Others arrive in the United States through legal means, mostly through refugee and asylum channels and a visa lottery program that allows 20,000 Cubans entry every year.

While changes to immigration policy are not imminent, the recent diplomatic opening prompted an increase in the number of Cuban emigrants attempting to make their way to the United States by sea, fearful that the lenient policy will end. The U.S. Coast Guard reports nearly 500 Cuban migrants were picked up at sea in December, more than double a year ago.

Given pent-up demand for family reunification and the strong ties among Cubans and Cuban-American communities in the United States, what might be the impact on U.S. settlement if Cubans are treated like other immigrants?

Nationwide, 2 million people (3.7 percent) of all Hispanics or Latinos identify as Cuban. Here are a few salient facts about Cubans—those born on the island—and Cuban-Americans—those born in the United States who claim Cuban identity: 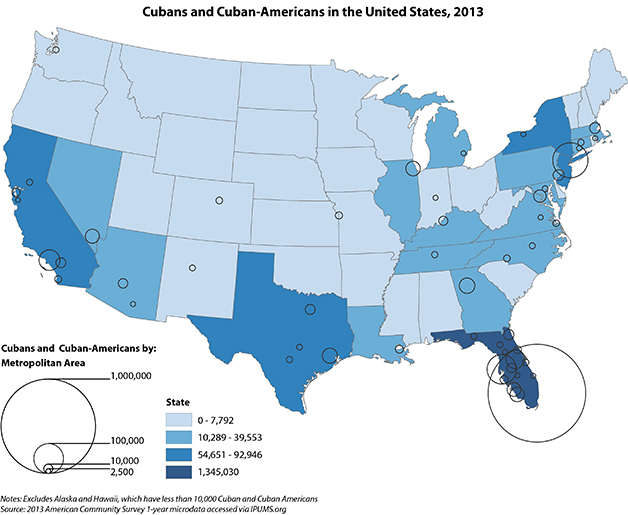 Restoring relations with Cuba may mean the end of the wet foot, dry foot policy, and perhaps other exceptional immigration practices such as the program that expedites the entry of Cuban medical workers. If would-be Cuban immigrants and refugees are treated like those from other countries, we would likely see a significant decrease of newcomers over the long run.

However the negotiations turn out, immigration remains a social process: Immigrant newcomers tend to settle in places where they have friends, countrymen and information. As a result, it’s likely that immigrants will journey to places with other Cubans, both the well-trod and the newer destinations.

After the submarines, I think Europeans really needed to have some proof that something was going well [... With world leaders gathering for the United Nations General Assembly, and with the fallout over the submarine deal still ongoing] there was a need to just lift this irritant. [...] It’s definitely not enough, but it’s a good first step in acknowledging at least that your partners deserve a minimum of respect. One less irritant cannot be a bad thing.