John Beshears, David Laibson, and Brigitte C. Madrian of Harvard and James J. Choi of Yale, find that employees of 11 companies contributed the same amount to retirement plans after employers introduced Roth 401(k) plans, the kind that offer no upfront tax deduction, as they did when employees were offered only 401(k) plans for which contributions are tax deductible. They speculate that employees don’t understand the difference, and suggest government might consider making more retirement saving non-deductible up front but tax exempt in retirement.

Bas B. Bakker and Joshua Felman of the International Monetary Fund suggest that, contrary to what some have claimed, the behavior of the rich played a significant role in the Great Recession. Specifically, the authors point to the decline and subsequent surge in the savings rate of the rich in the pre- and post-crisis years, which likely played a critical role in the aggregate consumption boom-bust.

Chart of the week: Russian ruble in the midst of a historic depreciation 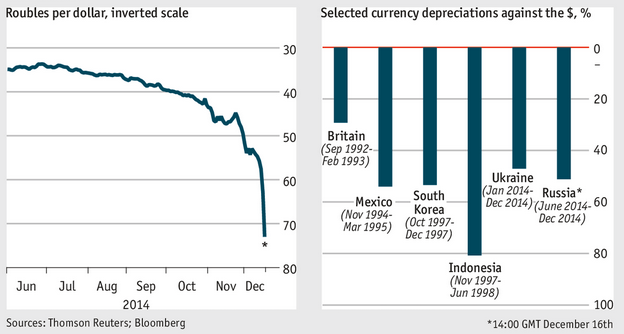 Speech of the week: Allowing competitive forces to flourish is “essential for future economic growth”

“It should be clear by now that I am a big fan of market forces. The returns from successful financial innovation in market-based finance and P2P finance are likely to be very large, from the perspectives of both the innovator and the macroeconomist. Allowing those competitive forces to flourish, within principles-based regulation aimed at protecting the financial system, is essential for future economic growth… But all of these market structures exist already, so speculating on their future is not that much of a stretch. That makes me wonder if we are missing something big. How blue-sky do we want to get? Does anybody besides me wonder what the banking system looks like in the background of Star Trek? Or, what about the corporatist model of finance, which lies in the background of Margaret Atwood’s novel, The Year of the Flood? Now that’s blue-sky thinking: people work for a massive corporation, live in the corporate compound, go to corporate restaurants and events, and bank with a financial intermediary wholly-owned by their own employer, which in turn invests the funds in growth for the corporation.”

– Stephen S. Poloz, Governor of the Bank of Canada

Finally, if you didn’t catch our event The Long Run Outlook for the Federal Budget: Do We Know Enough to Worry?, watch a a video of the full event, along with the discussion papers and response materials »