Last week, Joerg Sponer, a partner at Capital Fund, is said to have sent a memo (subsequently leaked to the Greek media) describing in hilarious terms the London meetings between the economic advisers of  A. Tsipras, the leader of the radical left ‘Syriza’ party in Greece,[1] and members of the financial industry in the City. The content is amusing as it depicts the distance between the people of the Greek ‘left’ from the reality of the global markets. Since then, reports from other financial institutions such as BofA-ML, have confirmed, more or less, the content of the Syriza’s adviser’s presentations and the negative reactions [2]. This hasn’t come as a surprise for those familiar with the ideology of Syriza as well as the dramatic, atavistic situation of the Greek political market in general. However, it may serve as a warning for those believing that Syriza is just another idealistic, romantic, partisan leftist European party which will adjust to the reality as soon as it takes over power and become, either gradually or violently, opportunistic. Syriza remains a serious political risk both to Europe and to Greece and, as the meetings show, to markets that have again sent Greek bond spreads sky-high. Ironically, it also represents the worst consequence of the failures of the type of last-minute internal devaluation policies that the troika has imposed on Greece, in cooperation with successive, incompetent Greek governments.[3]

Things are getting serious: The latest polls put Syriza ahead by 5-7 points, as angry voters from across the political spectrum get behind the party. It’s not surprising. This “supermarket” party promises almost everything to anyone, masking its policies with romantic pledges to stop humanitarian crises, to make the black market and bureaucracy disappear, to increase the minimum wage and minimum pension by around 40 percent (despite the fact that the social security system is in bad shape) and, last but not least, to negotiate a huge amount of debt forgiveness, mainly by having–sorry, ordering—the European Central Bank to buy most of it.

This is of course a “dream come true program.” The troika, by enforcing wage cuts for everybody during the last four years and accepting “tax anything that moves policies,” has pushed even educated voters to the extremes of the political spectrum. Indeed, it is absurd that now that there are some “growth shoots” in the economy, it is again pushing for wage-restricting policies instead of pressing the government to continue to reform heavily on the product and political market fronts.

This has important repercussions on growth, incomes and employment in the short- and in the long-term, by increasing political uncertainty again by destabilizing the government and strengthening the arguments of an untried Syriza ready to take over power. The creditors currently seem content to clash with Syriza, if and when this party takes over power, as a Syriza defeat by the creditors might be instructive for all of the eurozone.

In the meantime, political risk is killing the economy (again). Need proof?

Figure 1 correlates unemployment and political uncertainty. It shows a positive correlation meaning that when political risk is high, unemployment rises. While it is not the only reason, it certainly contributes to decreasing employment. Data from the last couple of months, during which time political risk skyrocketed, show that an increase in employment observed in the first two quarters of 2014 has now been reversed. 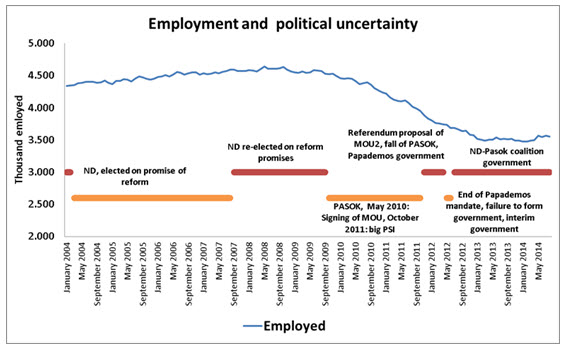 Figure 2 adds the cost of money that is critical to the recovery of the economy. It shows again a positive correlation between interest rates and political uncertainty. Low interest rates are critical for the internal devaluation solution to succeed as exports are decisively helped by low financial costs, -along, of course, with low energy costs, low taxes and social security contributions. But, importantly, costs are currently exceedingly high for Greek exporters compared to their competitors. Now, add to all these impediments the Syriza advisers assertions in London that they intend to stop reforms, terminate the program and start a socialist transformation of both Greece and Europe with the help of Podemos and Die Linke. It’s no laughing matter. 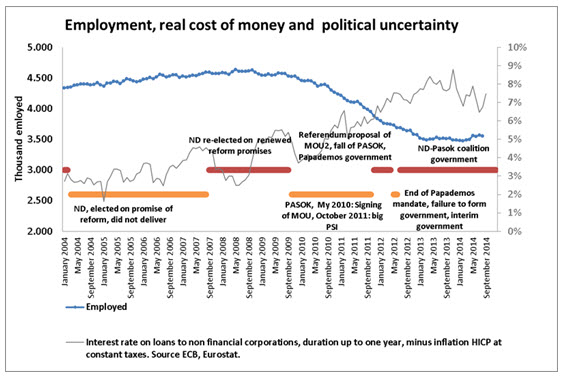 So, is this a “2012 Grexit deja vu”? If, naively, both the creditors and the government believe that nothing will happen if we repeat the same mistakes again, the answer is yes.

SDRs for COVID-19 relief: The good, the challenging, and the uncertain