Six years into the crisis, the eurozone remains the sick man of the world economy. Its GDP today is barely at the pre-crisis level, deflation looms and the difference between the healthier core and a struggling periphery is not resolved. Moreover, even Germany may be slowing down, and Finland is in persistent recession.

By announcing the Outright Monetary Transactions (OTM) back in 2012, Mario Draghi defused the financial crisis by promising to act as a de facto lender of last resort for troubled southern economies. Then, last June, the European Central Bank (ECB) embarked on its own version of quantitative easing, promising credit to eurozone firms and households. The ECB has been blamed in some quarters for doing too little, too late. It is probably true that the deflationary threat had been underestimated by ECB officials. It should be recalled, nevertheless, that the ECB fought the crisis, facing resistance from some of its most influential members. It saved the eurozone from disintegration but it has not been able to help launch growth. On the contrary, it is increasingly evident today that the impact of monetary policy on growth is limited. Balance sheet recessions increase the propensity to hoard among households, firms and financial institutions. In a liquidity trap monetary policy loses traction. Today, stagnant income and high unemployment in most eurozone economies, and uncertainty about the future, all contribute to compress private spending and demand for credit across the eurozone, while they increase the appetite for liquidity. At the end of 2013, private spending was 7 percent lower than in 2008 (a figure that reaches a staggering 18 percent for peripheral countries). In such a situation there is only so much the ECB can do.

Monetary policy has been given almost obsessive attention, but there has been much less debate about the nature of fiscal policy. That may be changing, however, as Mario Draghi’s speech in Jackson Hole signals. True, the European Commission and Germany have insisted that fiscal consolidation should be strengthened further. Yet, the argument for boosting public investment seems to have gathered strength and is likely to be discussed at the next European Council meeting. This is long overdue: Since the Maastricht Treaty, cutting public investment has been the preferred instrument for fiscal consolidation by many countries, because it is generally less immediately painful than other cuts. The result is that in almost all eurozone countries public investment as a share of public spending decreased dramatically compared to the 1970s and 1980s. 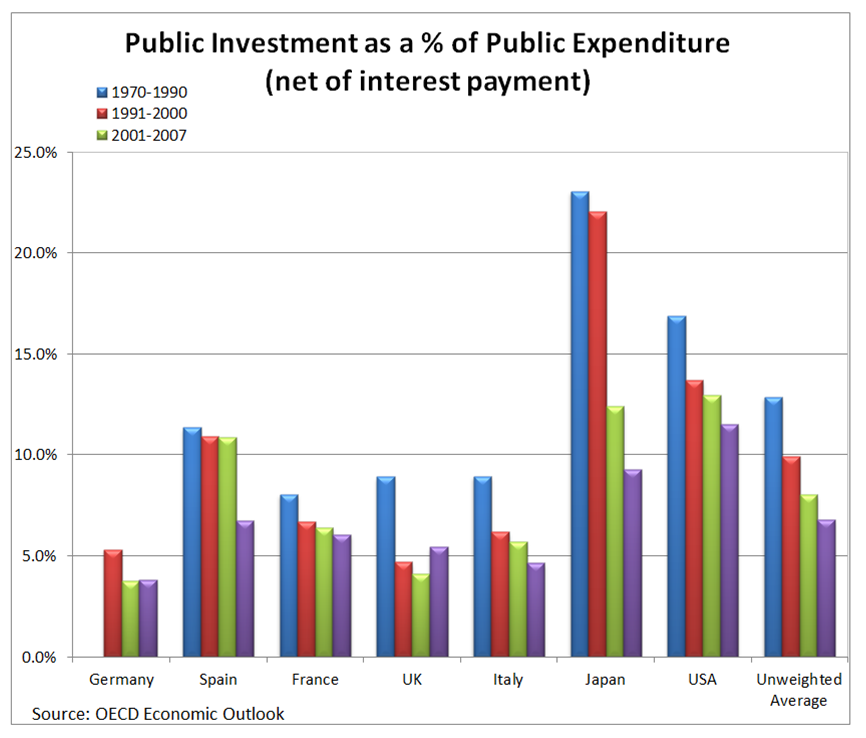 Thus, renewed attention to public investment is welcome news. Stronger public investment would sustain aggregate demand in the short run and, in conjunction with supply side structural reforms, crowd in private investment and increase potential output. Substantial Europe-wide investment programs seem today to be politically unfeasible. The solution must therefore be found at the national level. What is currently proposed is that countries negotiate with the commission on a bilateral basis to gain increased room for investment in exchange for vague “structural reforms.” This process is unlikely to yield significantly higher levels of investment.

We believe that European countries should take a bold step, and introduce a golden rule of the type adopted by the United Kingdom in the late 1990s. Requiring countries to balance their current budget over the business cycle, while financing public capital accumulation through debt, is inter-generationally fair, and it would focus efforts of public consolidation on less productive items of public spending.

The adoption of a golden rule has been proposed several times in the past. The main criticism raised against its implementation is that it would yield over-investment in physical capital to the detriment of other items at least as “productive,” like spending on education. In addition, a grey zone in the definition of public investment would lead to creative accounting by governments, who would have the incentive to classify as investment expenditures not strongly linked to the creation of future productive capacity.

These are real difficulties. But to give up altogether on trying to distinguish between growth- supporting expenditures and current public consumption, is throwing the baby out with the bath water. The former will tend to reduce long-term indebtedness, particularly given the existing very low real interest rates environment, whereas spending for immediate consumption, however pressing it may be at times, increases indebtedness. The solution to the problem, as is the case in other areas, requires greater cohesion in the eurozone.

The Eurogroup, based on the work of the commission, could agree on detailed guidelines regarding golden rule related fiscal accounting and update them periodically.  The distinction will never be perfect, but the quality of the golden rule accounting could improve over time and allow a much more appropriate implementation of a long-run growth and debt reduction strategy.

The implementation of a golden rule of this kind would serve the purpose of focusing on the nature and quality of public spending in relation to the growth objective.  It would also force European policymakers jointly to have a periodic and transparent discussion on the investment needs of their economies, and to coordinate policies as part of a process that would increase participation, cohesion and legitimacy in the eurozone.

The free world and its enemies: What Putin’s war and China’s global ambitions mean for us