Is a college degree worth it? Not for everyone, according to our newly-released Center on Children and Families policy brief. The value of a college degree can vary dramatically, depending on factors such as field of study, type of college, graduation rate and future occupation. Here’s the first in a three-part blog post series, where we take a closer look at findings from the policy brief.

For the past few decades, it has been widely argued that a college degree is a prerequisite to entering the middle class in the United States. We all know that, on average, college graduates earn significantly more money over their lifetimes than those with only a high school education. Brookings’ Hamilton project has estimated that the average bachelor’s degree holder makes $570,000 more over a lifetime than the average high school graduate. What gets much less attention is that the college premium varies widely by the choices students make.

For example, the value of a bachelor’s degree depends heavily on choice of major and later occupation. No surprise here: the highest paid major is engineering. If on the other hand you studied education (but didn’t go on to get a master’s degree), you can only expect to make half of what those engineering majors do. (Stagnant teacher compensation is a whole other topic that we won’t go into here.)

Not everyone ends up working in the field they studied in college, so it’s also useful to look at earnings by occupation. The highest-earning occupation category is architecture and engineering, with computers, math, and management in second place. The lowest-earning occupation for college graduates is service. 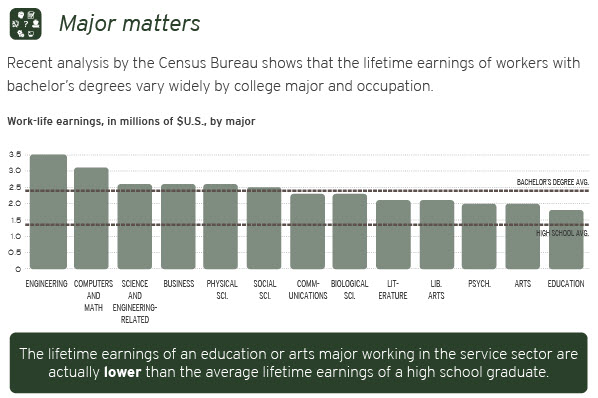 Of course, plenty of people choose to study art or become teachers because they derive intrinsic value from those fields that can’t be measured by a paycheck.  Personal preferences and noneconomic benefits are important, too. Few among us would want to live in a world with all programmers and no artists, or all investment bankers and no philanthropists.