Since the Supreme Court’s Affordable Care Act (ACA) ruling, a new pastime is sweeping the nation in which health policy wonks try to guess which states will be in and which will be out of the now optional Medicaid expansion. But given the complexity of health care reform, this is less a game of chance and more like Jenga – where moving just one piece can send the whole structure crashing down.

So far six governors have said they will not participate in the Medicaid expansion scheduled for 2014, while another five are reportedly leaning against it. Their resistance comes despite federal government assurances that it will pick up 100 percent of the tab for the first few years, gradually declining to 90 percent in 2020 and thereafter.

States have a point there– the federal government has offered a helping hand before only to snatch it back later. A notorious example comes from the federal tax code and the long and twisted saga of the individual tax credit against state estate and inheritance taxes paid.

In any event, where would state opting out leave the uninsured? Because of an odd artifact in the law, those earning between 100 and 138 percent of the federal poverty line could still qualify for federal tax credits to purchase insurance on a state or federal exchange. (Note that the income cutoff for federal subsidies is 133 percent, but the law disregards 5 percent of recipient income toward that amount.)

Those below the federal poverty line (about $11,200 for individuals and $23,050 for families of four) would get their state’s old Medicaid program, and possibly worse because rules preventing changes to eligibility and benefits before ACA’s roll out will have expired. States may also have incentives to shift more Medicaid recipients into health insurance exchanges so that these individuals and families are covered on the federal dime.

But there are limits to this strategy depending on how many uninsured state residents happen to fall above the federal poverty threshold, which applies the same everywhere regardless of local income. Thus, as the map below shows, states like Louisiana where 43 percent of the uninsured are below the poverty line may be better off with the Medicaid expansion. However, states like New Jersey, with 28 percent of the uninsured below this threshold may have more opportunities for federal cost shifting as things currently stand.

Oddly, Texas also appears in this latter group. Although it has more low-income uninsured residents overall, it has fewer who are eligible for the Medicaid expansion because the ACA specifically excludes undocumented immigrants and requires a 5 year waiting period for legal residents.

Of course, there are many moving parts here. The federal government will also be cutting payments for uncompensated care, and individuals and employers will be making their own decisions about where to buy insurance coverage. Meanwhile, lurking in the background are rising health care costs that are already squeezing federal and state budgets. Given the high stakes involved for everyone, some may wish it were only a board game. 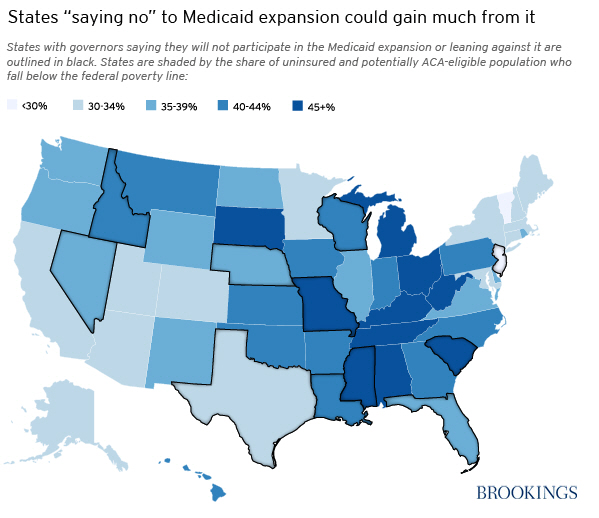 Note: Estimates do not include households with non-group or employer provided coverage who would potentially take up Medicaid coverage under the ACA.