This Saturday the world saw harrowing media accounts of the massacre perpetrated by the Syrian government’s bombardment of civilians in the city of Homs. The massive artillery barrage reportedly left many hundreds of people dead making it the most deadly attack of the year-long uprising. Homs had already suffered from recent violence, but had not previously experienced such a horrific assault on civilians.

On the same day, the United Nations Security Council (UNSC) failed to adopt a resolution condemning the violence in Syria, even though 13 out of the UNSC’s 15 country members supported the resolution. Two permanent members of the U.N. Security Council, Russia and China, sided with Syria’s Assad and exercised their veto power. Leaders in the west, as well as the head of the U.N., some Arab States and Syria’s own civilian groups have expressed outrage at the callousness of these vetoes.

Yet such veto should not surprise observers. The governments of Russia, China and Syria have common interests and protecting the human rights of their own or each other citizens is not high on their agendas. Instead, they share common economic, security and geopolitical interests, including weapons trade.


In Spanish there is a rather telling expression: “Dime con quien andas, y te dire quien eres,” whose literary translation is “Tell me with whom you walk and I will tell you who you are,” yet its spirit is best captured by an English idiom, “A man is known by the company he keeps.”

In terms of standards of political governance, with a few differences aside, the three governments make good companions. Their standards of governance are uniformly low and deteriorating.

China, Russia and Syria’s common misgovernance is compared to the governance standards of other members of the UNSC below (Figure 1). Take first Voice & Democratic Accountability (VA), one of the six dimensions we measure in the Worldwide Governance Indicators (WGI). This Voice & Accountability indicator from the WGI captures the extent to which political rights and civil liberties are provided, human rights are protected, and the extent to which there are freedoms of association, expression and press.


The figure below first shows how low, Syria, Russia and China rank globally in Voice & Accountability—toward the bottom of over 200 countries worldwide. And their governments’ performance on Control of Corruption (another component of the WGI) is similarly subpar. 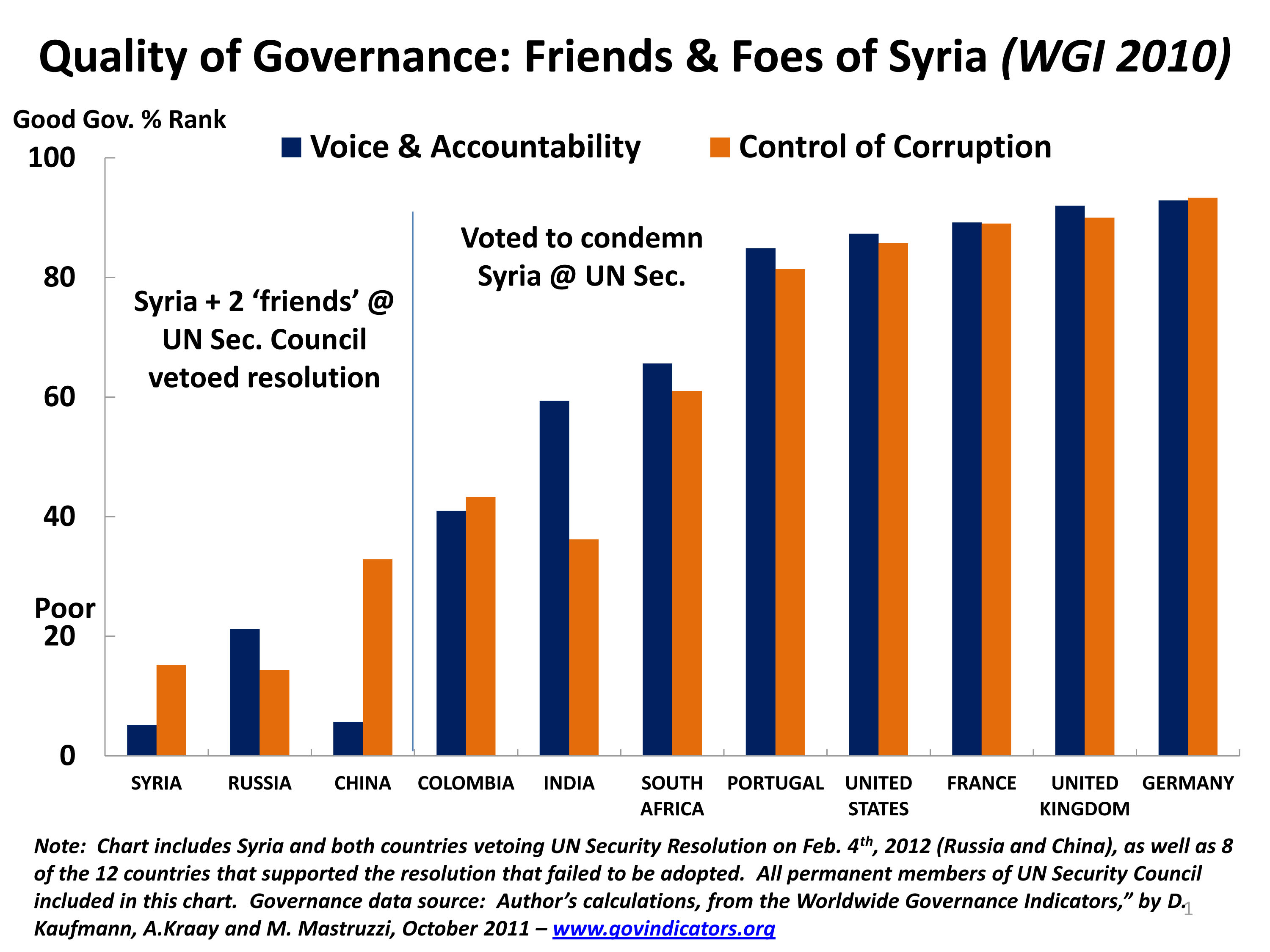 By sharp contrast, other countries in the U.N. Security Council, which voted in favor of the resolution condemning the violence perpetuated by Syria’s government, perform distinctly better on both Voice & Accountability and Control of Corruption.


Worse—and another reason for why there should be no surprise at the stance taken by Russia and China—the countries’ performance on these important dimensions of governance is not only highly challenged but has deteriorated over the past decade.


At a recent conference on Russia, I presented empirical evidence on the deteriorating governance situation in the country. One chart depicted Russia’s trend in several governance dimensions over the past decade such as Voice & Democratic Accountability, Political Stability & No Violence, and Control of Corruption and is summarized in Figure 2 below. The low and deteriorating level of governance by Russia’s government is not only evident from these indicators, but also from the actions of top political leaders, and in the reaction of its citizens in the form of mass demonstrations against Putin. 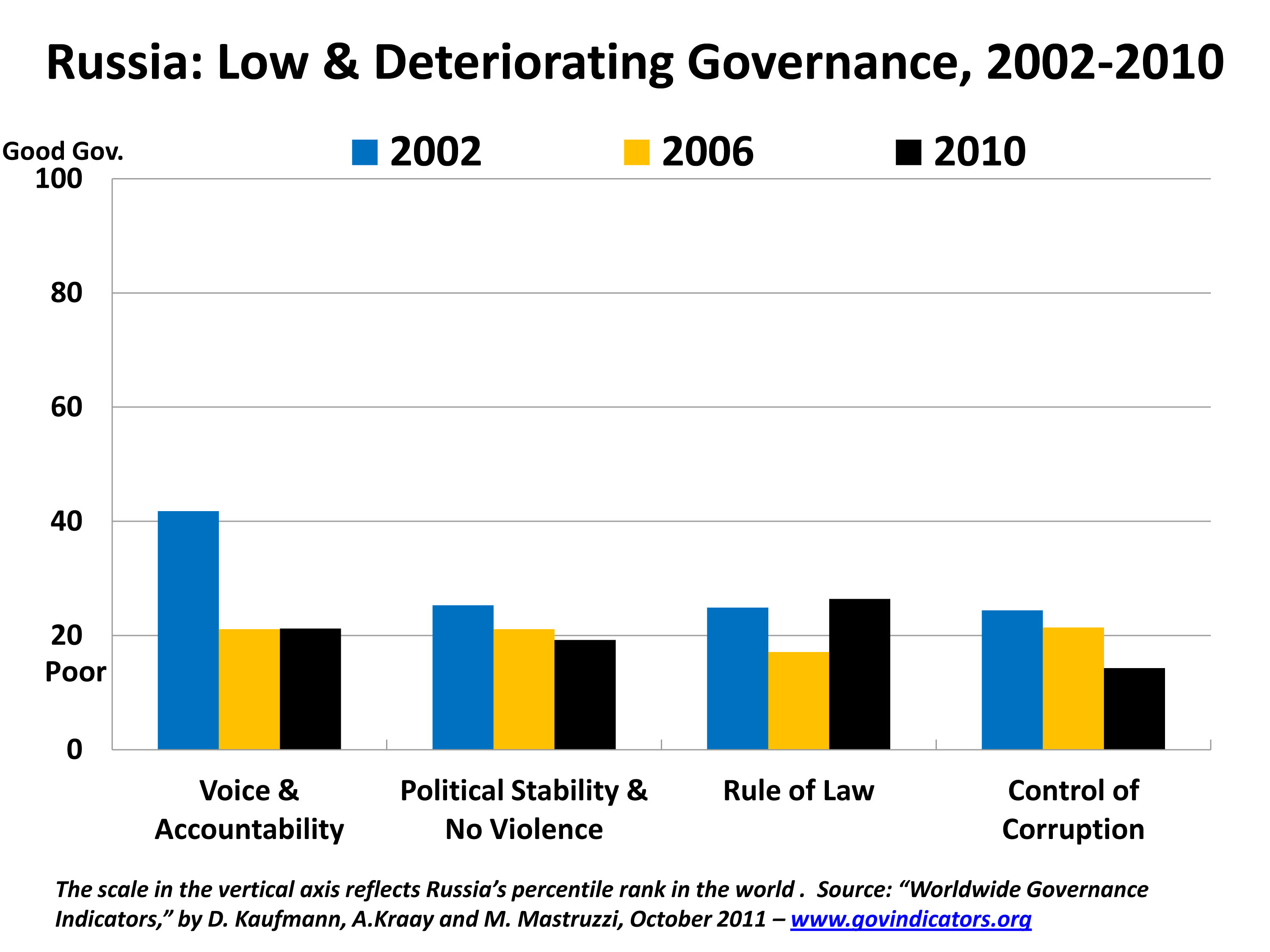 Such sharply contrasting performance on national-level indicators of governance and the disparate priorities across powerful countries provides a sobering perspective on the constraints faced by global governance institutions nowadays, particularly the U.N. and G-20.


The power of uncensored data and the voice of domestic and international non-governmental institutions should feature more prominently in an era where some powerful governments are not playing a constructive role in global governance. Nobody knows this better today, and feels the pain of such misgovernance more acutely, than the citizens of Homs.