Children’s economic well-being has generally deteriorated between 2010 and 2011, as families with children continue to be negatively impacted by the lingering effects of the recession. There is some good news: the number of children with an unemployed parent is lower than a year ago. On the other hand, the number of children receiving food stamps has continued to grow, largely due to increased financial hardship among individuals and families. In addition, a report released today suggests that there has been an increase in child poverty between 2010 and 2011, although we will not know for certain until the Census Bureau releases the official poverty statistics next September.

Children with Unemployed Parents. An estimated 6.5 million children are living with unemployed parents during an average month of 2011, based on data through September. While much higher than before the recession, this is 1 million fewer children than last year. The good news of a decline is somewhat tempered by the large number of children – 3 million – living with a parent who has been looking for work for more 6 months or longer. Moreover, the negative effects of job loss on children can persist after unemployment ends, through effects on parents’ long-term earnings and on children’s academic success .

Children Receiving SNAP Benefits. More than one in four American children- nearly 21 million children – are now receiving food stamps (now called Supplemental Nutrition Assistance Program or SNAP benefits), an extraordinary increase of 8 million children over the past four years, and 2 million children in the past year. While the program is open to individuals of all ages (provided they have incomes of less than 130 percent of poverty, or currently about $2,000 per month for a family of three), families with children are the most likely to apply. Almost half of participants receiving SNAP benefits are children, making SNAP caseloads another good barometer of children’s economic well-being.

In one sense, the rise in SNAP benefits can be viewed positively, as a sign that the safety net is working: families affected by the recession are receiving assistance so that their children do not go hungry. On the other hand, the rise in SNAP caseloads signals the rising needs of families, particularly families with children. While the increased use of on-line applications and other shifts in administrative practices may have fueled some of the rising caseload, I estimate that most (more than two-thirds) of the increase between 2007 and 2009 is due to deteriorating economic conditions, and a similar pattern is likely for the last two years.

Child Poverty. Child poverty has risen by a percentage point or more for each of the last four years, rising from 18 percent in 2007 to 22 percent in 2010. Over the same three years, the number of poor children has increased by 3 million, from 13 million to 16 million. Using state-specific data on unemployment rates and SNAP caseloads, I predict that child poverty has risen again in 2011, by about a half percentage point or 340,000 children, a small but statistically significant increase that will leave the rounded rate at 22 percent. In other words, more than one in five children are growing up in families with very low incomes (less than $22,400 for a family of four). This prediction may be conservative; Brookings colleagues have run simulations suggesting child poverty may be as high as 24 percent in 2011.

Generally, children appear to be worse off economically in 2011 than in 2010, but not by huge amounts, by my estimation. But 2010 was a year of great economic hardship for families with children. In 2010, half the states (25 states) had child poverty rates of 20 percent or higher, a dramatic increase from the 14 states having such high poverty before the recession, as shown in the map below. An additional two states are expected to join the ranks of high poverty states in 2011. 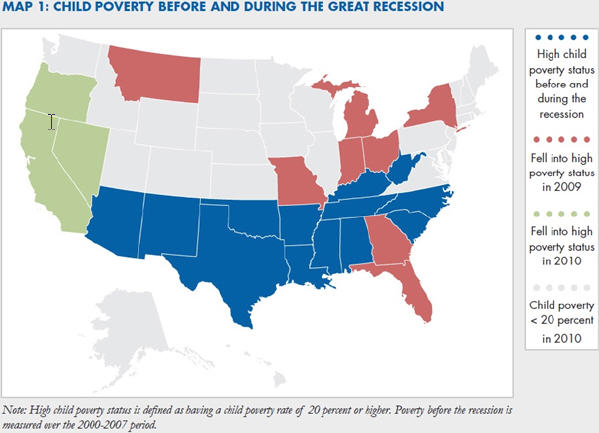 Child poverty rates tend to move fairly slowly and so child poverty rates are likely to remain above 20 percent not just in 2011, but also in 2012 and over the next few years. The economy may have begun its slow recovery, but conditions are not yet improving for children in the most vulnerable families.