In the post-9/11 era, Americans continue to wrestle with issues of national security, tolerance, religious freedom, and religious and ethnic pluralism —matters that lie at the heart of our national identity and cultural values.

As part of our ongoing work with the Public Religion Research Institute, we recently released a new study that offers insight into how our nation still grapples with what it means to be American and how to resolve political, religious and ethnic differences in an increasingly diverse country. What It Means to Be American: Attitudes in an Increasingly Diverse America Ten Years after 9/11 delivers rich data as to Americans’ attitudes toward Islam, anti-Muslim and anti-immigrant sentiment, issues of national security and border security, and the role of religion and in U.S. politics.

We found that the country is in the midst of a struggle over what growing religious, racial and ethnic diversity means for American politics and society, and that partisan and ideological polarization around these questions will make them difficult to resolve. Our research demonstrated that:

Media consumption and political affiliation also were shown to have major impact on respondents’ views, which was much discussed at the event where we presented our findings: 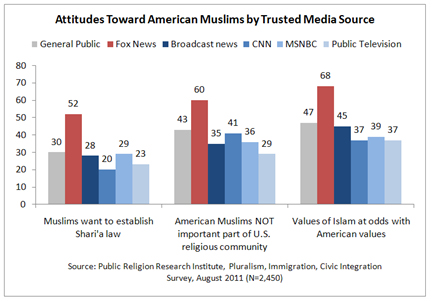 And while Americans expressed overall tolerance for Islam, those views stood in tension with their sentiments about specific aspects of Muslim activity: 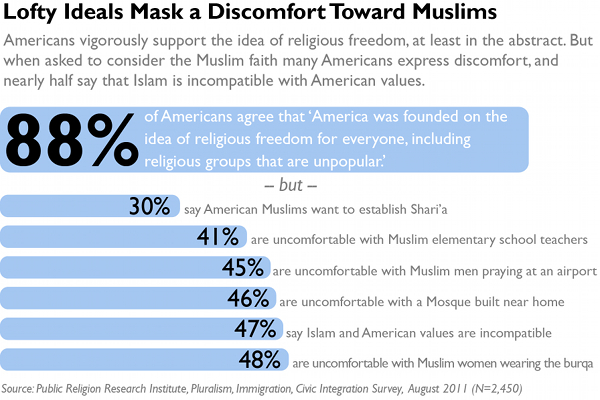 The report also explored issues related to immigration, and public ambivalence on that subject of immigration was one of the most powerful findings of the survey. Consider the following:

The generational patterns were striking and point to a long-term change in attitudes: young people on the whole are more sympathetic than their elders to both immigration and diversity. But in the short run, this will be a difficult and at times divisive debate. 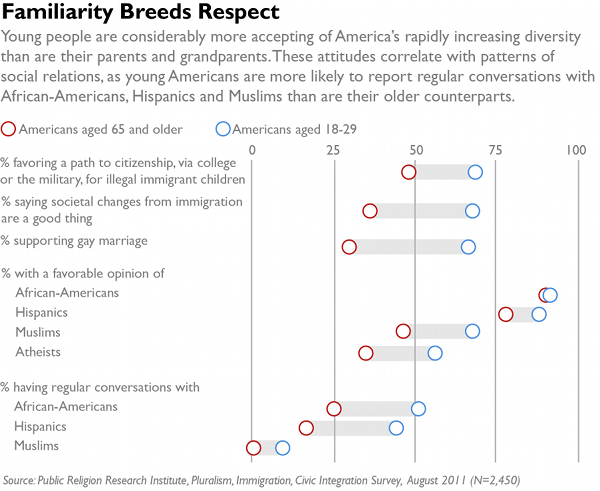 The survey underscores that the country is in the midst of the kind of argument it has had again and again (think Catholics in 19th century America; African Americans in the 20th century) over diversity and immigration, and that this debate now has a strong partisan and ideological dimension, which it has not always had.

The American pattern has been to battle fiercely over the inclusion of new groups, to ask whether this or that new group can ever “Americanize” and whether it will push the country away from its founding principles and commitments. And then several things happen that culminate in the classic American bargain. The new groups turn out to be, or quickly become, very committed to the underlying values and principles of our democratic republic—sometimes more passionately than those who were here earlier and may have come to take them for granted. Over a generation or two, the new arrivals work hard, build strong communities, and in the process, master the English language. They become “American.” But they also change the meaning of being American in ways that, historically, have enriched the nation. And the country moves forward, still very much itself, and also transformed. The generational patterns discerned in our study with PRRI suggest that while we are in for some transitional turbulence on these matters, the arc of American history will, again, bend toward inclusion.