The latest wave of 2010 Census data, released this week, confirms what earlier surveys have strongly hinted: virtually half of recent births in the U.S. are minorities. We are becoming a more globalized nation than most Americans have experienced in their lifetimes. The great demographic change has potential long term benefits for our population growth in terms of our economic competitiveness in the international marketplace. But these changes, coming so quickly and evolving from the “bottom up” of our age structure, may exacerbate existing cultural generation gaps, as older, largely white generations may be slow to recognize the promise of this change.

The new Census results show 49.8 percent of infants under age one are members of a race-ethnic minority – up from 42.4 percent in 2000. Given this trajectory, and the fact that the Census was taken well over a year ago, it is almost certain we have now “tipped” racially, and more than half of all national births are minorities. More than a quarter of infants are Hispanic, Blacks and Asians comprise 13.6 and 4.2 percent, respectively. Nearly one in twenty births were reported to be two or more races.

The geography of this change is important. Our larger, most urbanized states – magnets for immigrants and “new minorities” as well as major settlements for Blacks – are leading the way toward this transformation. Minority infants now represent the majority of births in 14 states, up from 7 in 2000; the newest ones include New York, New Jersey and Florida (Table 1). California and Texas had already reached this status, and Illinois just missed out.

Yet the new census shows a spread well beyond these areas (see Map 1 below). Minorities now comprise at least 40 percent of infants in more than half of all states, with the white share of infants declining in all of them, with the exception of the District of Columbia. Especially large minority gains occurred in New England states, Connecticut, Rhode Island and Massachusetts, as well as rapidly growing states like Florida, Nevada and Georgia. 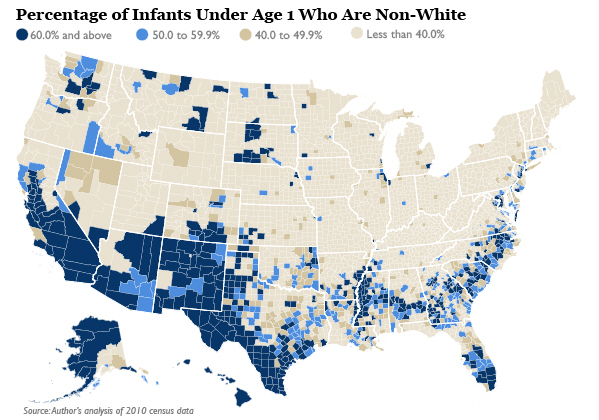 Hispanics are a large part of this dispersion. They comprise more than half of all infants in California, Texas, and New Mexico and are the largest source of births in Nevada and Arizona. Among minority births, they contribute the most in 26 states, including Midwest states like Wisconsin, Minnesota, Kansas, Nebraska, and Iowa. Blacks represent the largest minority in 17 states– all in the South except for Michigan, Missouri, Ohio, and Pennsylvania.

These gains in minority births, especially Hispanics, can be attributed to the growth of the fairly youthful minority populations along with the aging of much of the white population beyond its high fertility years.  As noted elsewhere, there was an absolute decline of white children under 18 nationally between 2000-2010, and it was the new immigrant minorities that were responsible for all child growth.

Census data further amply the “bottom up” nature of the nation’s diversification, showing a sharply increased minority presence with younger ages (see Figure 1 below). At the extremes, minorities make up only 15 percent of those aged 85 and older, but nearly half of the under 5 age group. This span reflects several generations of change in America. Most baby boomers and seniors grew up in an era of low immigration, and the small minority population  was comprised largely of African Americans.

In contrast, those below age 35 grew up at a time of rising immigration. Hispanics and Asians combined comprised the lion’s share of the minority population and, in highly diverse parts of country, interracial mingling took place in classrooms, workplaces and civic activities.

In some places this youthful diversification occurred rapidly. For example, Arizona in 2000 had a minority majority population below age 9, but by 2010, that cutoff rose to age 24. Similar rapid shifts occurred in Nevada, Florida, and Georgia. In California,  the population under age 52 is now “majority minority”, but older boomers and seniors are far less diverse than younger generations.

These trends can only exacerbate “cultural generation gaps” between the young and the old when it comes to issues that could potentially divide communities.

Using a short hand measure of this gap, (the difference between the white share of age 65 and over population minus the white share of the below age 18 population) it is clear that gaps are larger in states with substantial minority growth infusions,like Arizona and Nevada, than in those a still small minority presence, like West Virginia or Vermont (see Figure 2 below).

As America’s younger population becomes more diverse and spreads to broader parts of the country, we need forward looking political and civic leaders to bridge race-generational divides that are already fuelling issues like immigration and our ongoing budget battles over revenue and government spending choices. Older Americans fear cuts to Medicare and Social Security, but they need to understand the long term benefits for the country and for them that will come from providing younger Americans the wherewithal for good education, housing support, and health care. Our young, diverse population will be the backbone of our labor force and will provide future business and government leadership, in a new American demographic era.