Last week’s tragic shootings in Baton Rouge, outside St. Paul, and in Dallas reignited police and community tensions, reminiscent of last year’s incidents in places such as Baltimore, North Charleston, and Staten Island.

While numerous and complicated historical, economic, and race-based factors underlie these tragic incidents, one area of ongoing focus is the degree to which the demographic profile of local law enforcement mirrors that of the communities they are charged with protecting. A protester arrested in Baton Rouge was quoted in the New York Times on this topic: “What you’re seeing is a situation much like Ferguson and other places where you have a majority-white force policing a majority-black city.” One possible consequence: A new study from Harvard’s Roland Fryer finds that black men and women are considerably more likely to encounter the use of force from police than their white counterparts.

Thus, places with the widest demographic disparities between law enforcement officers and local residents may need to pay special attention to their community policing strategies, as well as consider more proactive efforts to hire and retain diverse members of those communities. Last fall, Governing Magazine took an extensive look at racial and ethnic diversity in large local law enforcement agencies. Reporter Mike Maciag found that, on average, people of color on the force were underrepresented by a combined 24 percentage points compared to their share of the local population.

We took a close look at the data from that article, which Governing generously provided to us. We isolated the primary city in each large U.S. metropolitan area to see what characterized cities with particularly large racial and ethnic differences between police and local residents.

The cities with the largest disparities include several smaller, older places in the Northeast where the population is majority black or Latino, and police are majority white: Allentown, Hartford, Providence, Syracuse, Rochester, Dayton, and Bridgeport. They are joined by a few Southern cities, including Baton Rouge, with a similar black-white disparity. The remainder are Western cities—including Stockton, Sacramento, Bakersfield, Riverside, and Las Vegas—where Latino representation on the force has not managed to keep pace with the group’s rapid growth in the local population. 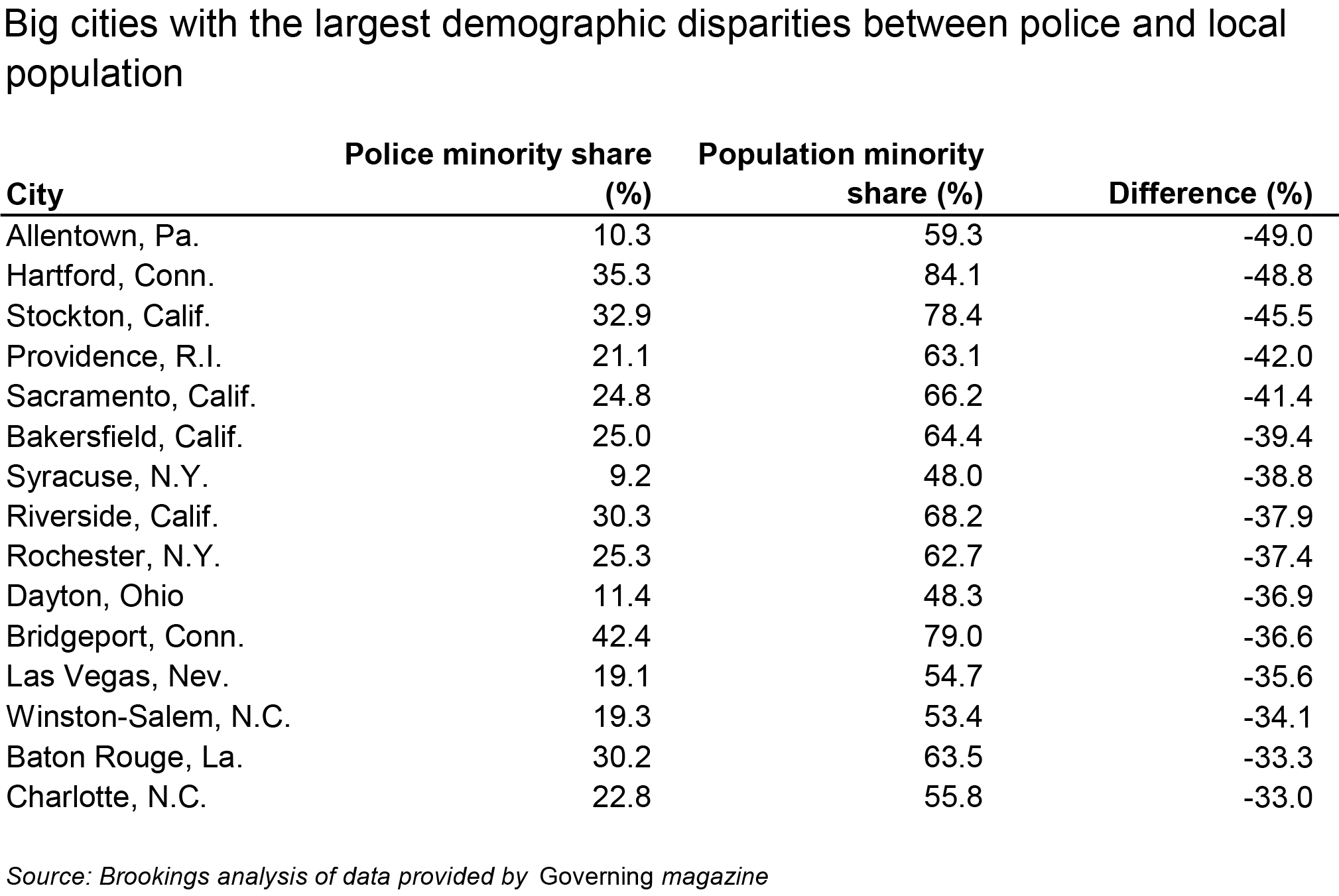 Cities with the smallest demographic disparities between law enforcement and local population look somewhat different. Many are larger, Western cities, including Honolulu, El Paso, Los Angeles, Seattle, and San Francisco. But several notable Southern cities show small disparities as well, such as Washington, D.C., Atlanta, Miami, and Charleston. Interestingly, the racial and ethnic makeup of the New Orleans Police Department broadly mirrors that of the city itself, even as its Louisiana neighbor, Baton Rouge, exhibits a deep demographic divide. 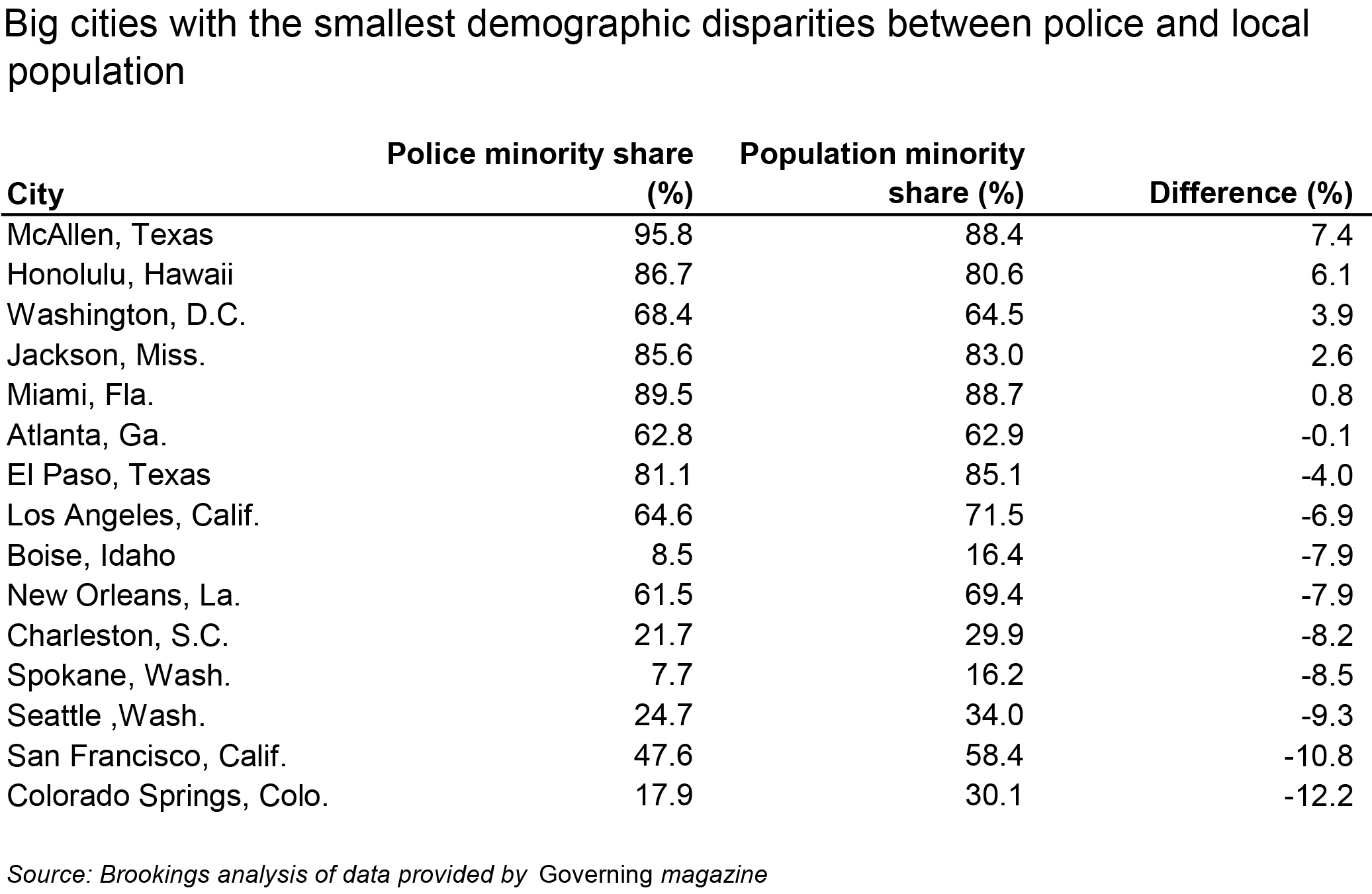 Yet as the fatal shooting of Philando Castile in Falcon Heights, Minn. last week, and that of Michael Brown in Ferguson, Mo. in 2014 demonstrate, the impacts of these disparities are not confined to big cities, but extend to their many surrounding suburban communities. In many cases, these communities are diversifying faster than their nearby big cities, and often faster than the local law enforcement agency.

The Governing data only covers agencies serving at least 100,000 residents, so most suburbs don’t make the cut. But the database does contain information for 122 law enforcement agencies covering cities and counties outside the largest in each metro area. We compared the magnitude of the demographic disparity in those agencies to that in their metro area’s largest city.

Most secondary city and suburban police departments, it turns out, exhibit even larger diversity gaps than their nearby big cities. This was true for 83 of the 122 agencies (68 percent). The average (population-weighted) under-representation of minorities in these smaller city and suburban police departments was 26 percentage points, versus 20 percentage points in the largest cities. Notably, minorities are dramatically under-represented on the police force in North Charleston, site of Walter Scott’s fatal shooting in 2015, even as the force next door in Charleston is demographically diverse. 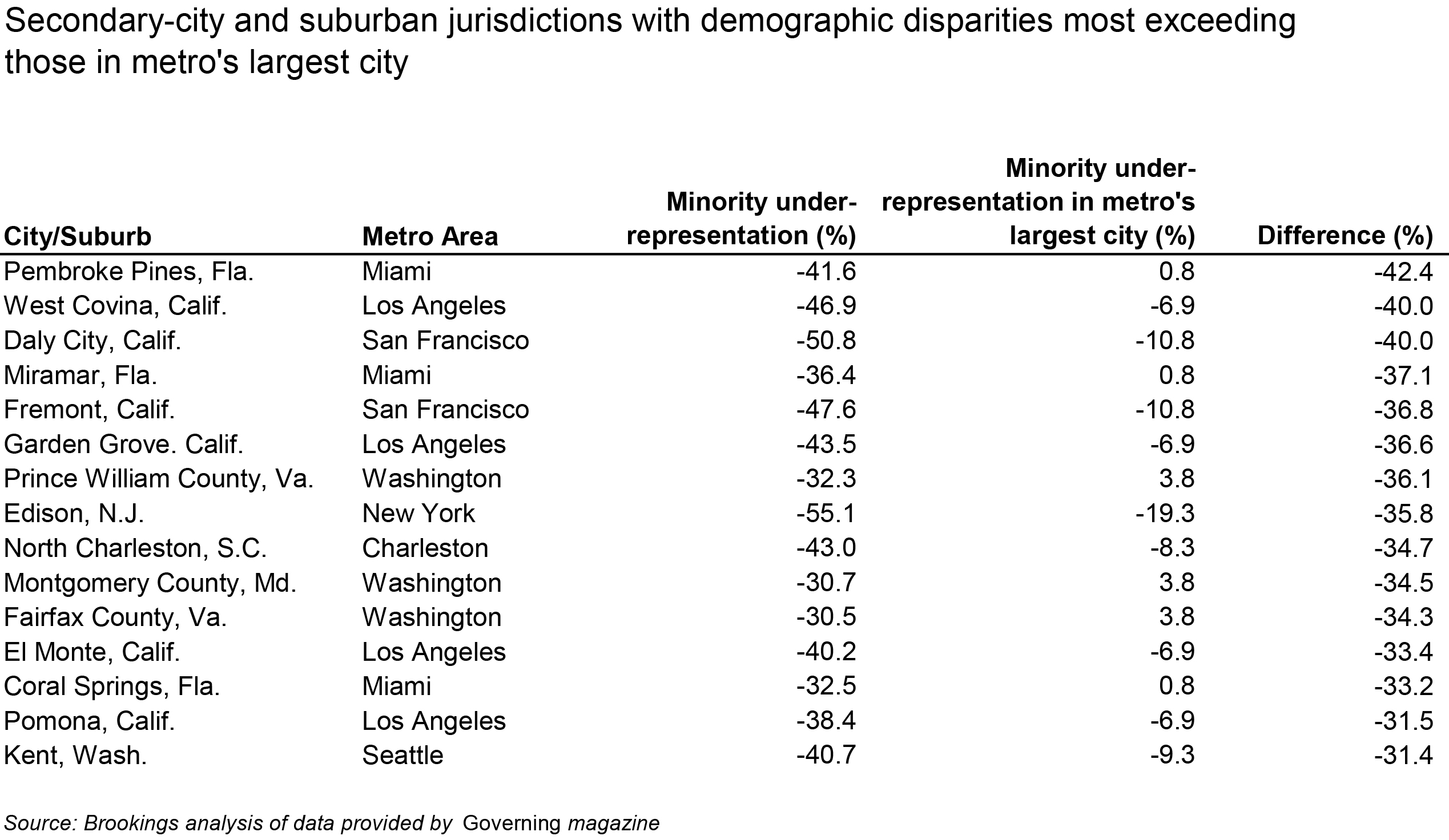 Bringing local law enforcement into closer demographic alignment with local populations is no small task, nor does it provide a guarantee that tragic confrontations won’t occur. As Maciag points out, three of the six Baltimore police officers charged in Freddie Gray’s death were black. Still, cities and suburbs characterized by substantial demographic disparities should carefully consider how best to navigate or narrow the experiential divides between police and the communities they seek to protect.