Racial diversity will be the most defining and impactful characteristic of the millennial generation. Newly released 2015 Census data points to millennials’ role in transitioning America to the “majority minority” nation it is becoming.

More important for the future is the clear disparity between the racial makeup of the millennial generation and of preceding generations. Millennials were born during a period of heightened immigration and more modest white growth (See Figure 1).

As of 2015, the population 55-years-old and older, which includes most Baby Boomers, is “whiter” than the country as a whole (75 percent vs.  61.6 percent) and, among them, blacks are the largest racial minority. Those in the 35- to 54-year-old age group, including Gen Xers and the tail-end of the Baby Boom generation (at 61.5 percent white, 17.6 percent Hispanic and 12.5 percent black), roughly represent the national racial composition.

Plainly, the millennial generation is ushering in the nation’s broader racial diversity. Overall, millennials are 55.8 percent white and nearly 30 percent “new minorities” (Hispanics, Asians and those identifying as two or more races). Back in 2000, when millennials were just beginning to impact demographics, this young adult age group was 63 percent white, whereas  in 1990 it was 73 percent white.

Quite a few states exhibit more diversity in their millennial populations than the national numbers show (see Map 1). In California, less than one third of millennials are white, and more than 60 percent are new minorities (see Table 1). 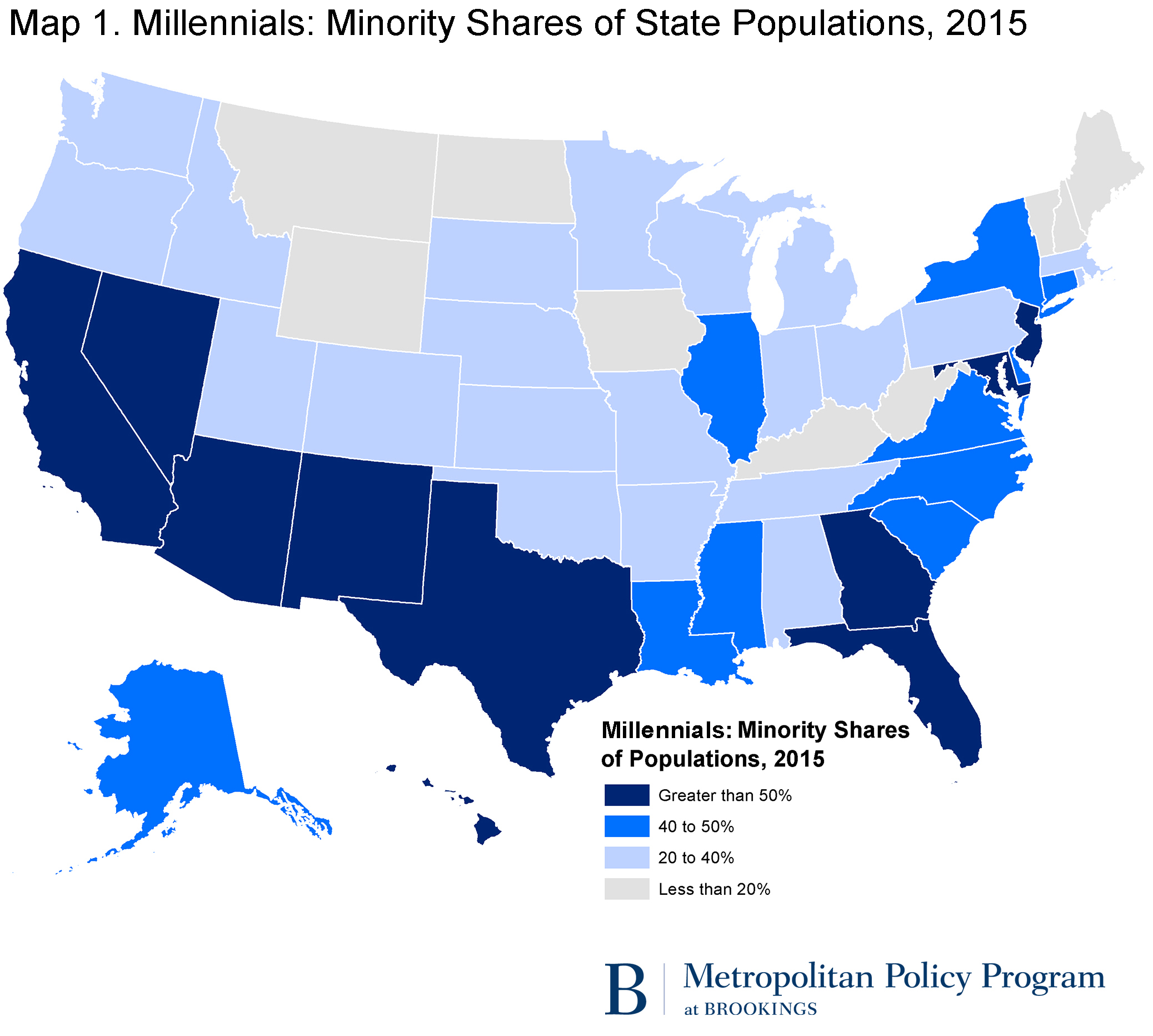 A bridge to the post-millennial generation

The idea that millennials are a bridge to a much more diverse America is evident from looking at the post-millennial generation—persons now under age 18. Whites comprise just over half (51.5 percent) of this generation. Of this subset, people between ages one through five are minority white (see Figure 1). Nearly 34 percent of this group consists of new minorities, and almost a quarter is made up of Hispanics.

A noteworthy demographic dynamic is making the young post-millennial generation more racially diverse – the absolute decline in the number of white children (persons under age 18). This began to occur between 2000 and 2010, and continued between 2010 and 2015.  More white children are aging past 18 than are being born or immigrating. Although white fertility is low, it is the aging of the white population, with proportionately fewer women in their childbearing years, that is leading to a projected long term continuation of this trend. It is broad based, occurring in 46 states (see Table 2). This means that the route for youth population gain in most states is through minority gains, via fertility or in-migration; thus making the child population more racially diverse. 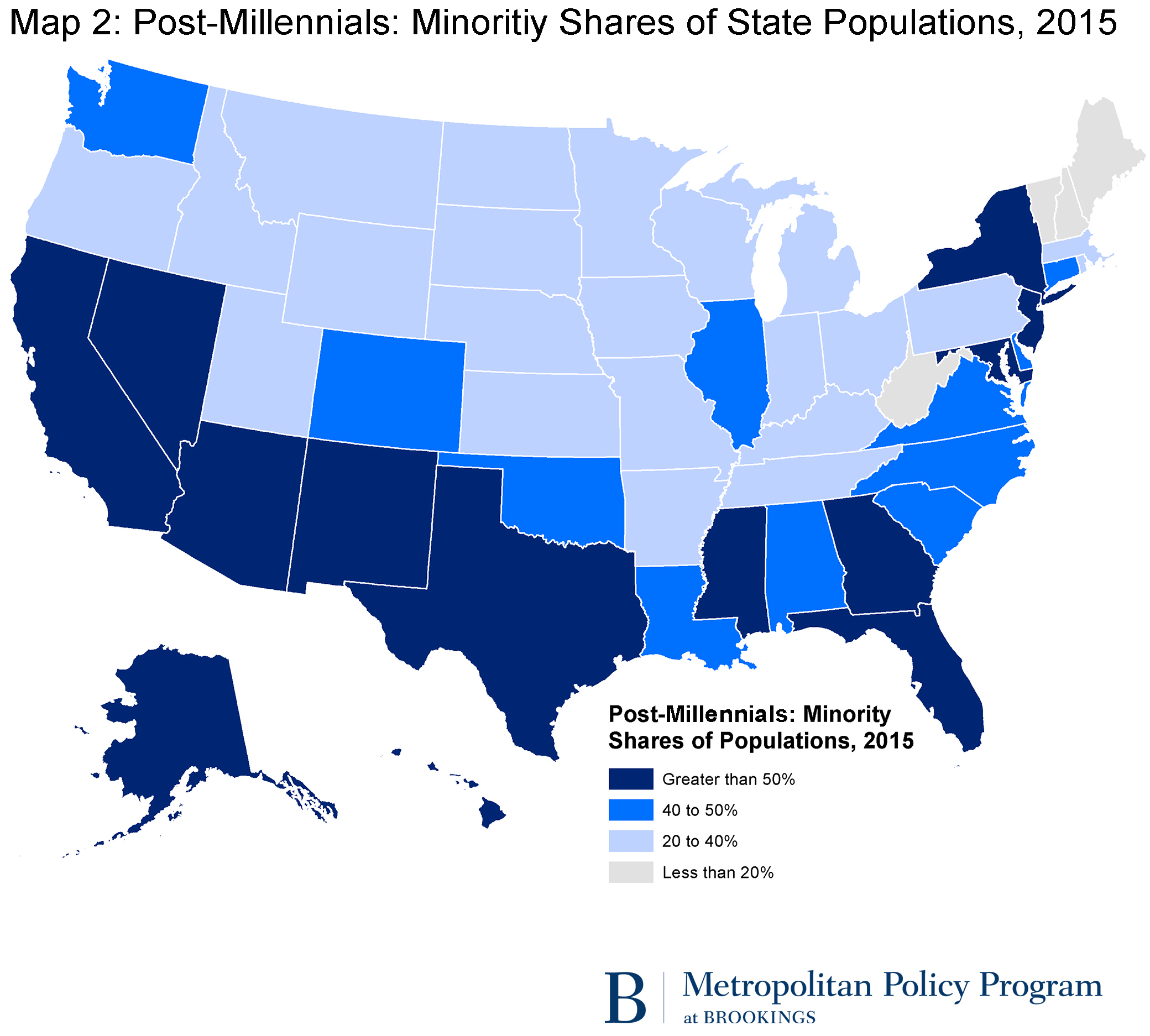 The rapid growth of minorities from the “bottom up” of the age structure is creating a racial generation gap between the old and young that reflects the nation’s changing demography. This gap is spilling over into national politics with older white Americans resonating differently than younger minorities on issues like government spending, affirmative action, and immigration.

The demographic fault line for the gap appears to lie between the population over age 55 and those under age 35 (including millennials and post-millennials). A short-hand measure is the difference between the percent white among these two populations (75 percent vs. 54 percent for a “gap” of 21 percent, nationally). Moreover, the gap is especially high in states that that have received recent waves of new minority residents to counter more established old whiter populations: Arizona leads all states with a gap of 33 percent. (Not surprisingly the four states with highest gaps could be competitive in this November’s presidential election.)

The emerging political division associated with the racial generation gap represents just one area where members of the diverse millennial generation are on the front lines of change. While racial inequality exists within this generation (white millennials are better educated and less susceptible to the forces of poverty than Hispanics and blacks), its members have embraced positive attitudes toward diversity more openly than their elders, and are responsible for much of the recent rise in interracial marriages.

As they move from young adulthood to middle age, millennials will serve as a demographic bridge between older, whiter generations and subsequent, more diverse generations. Their ability to assimilate, advocate, and become accepted will be key to the successful transition to a more racially diverse nation. Yes, millennials are worthy of attention. They are smart. They are creative. They are passionate about many issues. But the most defining characteristic of the members of this unique generation, as the country evolves demographically, is their racial diversity.

The emerging solidarity economy: A primer on community ownership of real estate