From transportation and water to trade and logistics, America’s infrastructure sector faces an enormous gap in worker hiring and retention, sorely needing a new generation to fill the shoes of an aging workforce. Collectively, more than 2.7 million workers are expected to retire or permanently leave infrastructure jobs over the next decade, threatening to hold back a variety of long-term projects but also presenting widespread economic opportunity for workers across all skill levels.

Among the 14.5 million infrastructure jobs nationally, dozens of different occupations are going to experience shortfalls. However, the shortage of truck drivers and air traffic controllers is particularly urgent, as many shipping companies and airports have reached a tipping point. Recent estimates by the American Trucking Association show a shortage of 48,000 truck drivers by the end of this year, a figure that could balloon to 175,000 by 2024 and slow the flow of goods. Meanwhile, the National Air Traffic Controllers Association indicates that almost 3,300 certified controllers are currently eligible to retire, yet only about 1,800 are ready to replace them, which could limit global connectivity.

While these two occupations play a key role in markets across the country, the workforce development challenges—and opportunities for bigger worker paychecks— are likely to reverberate more in some areas than others. 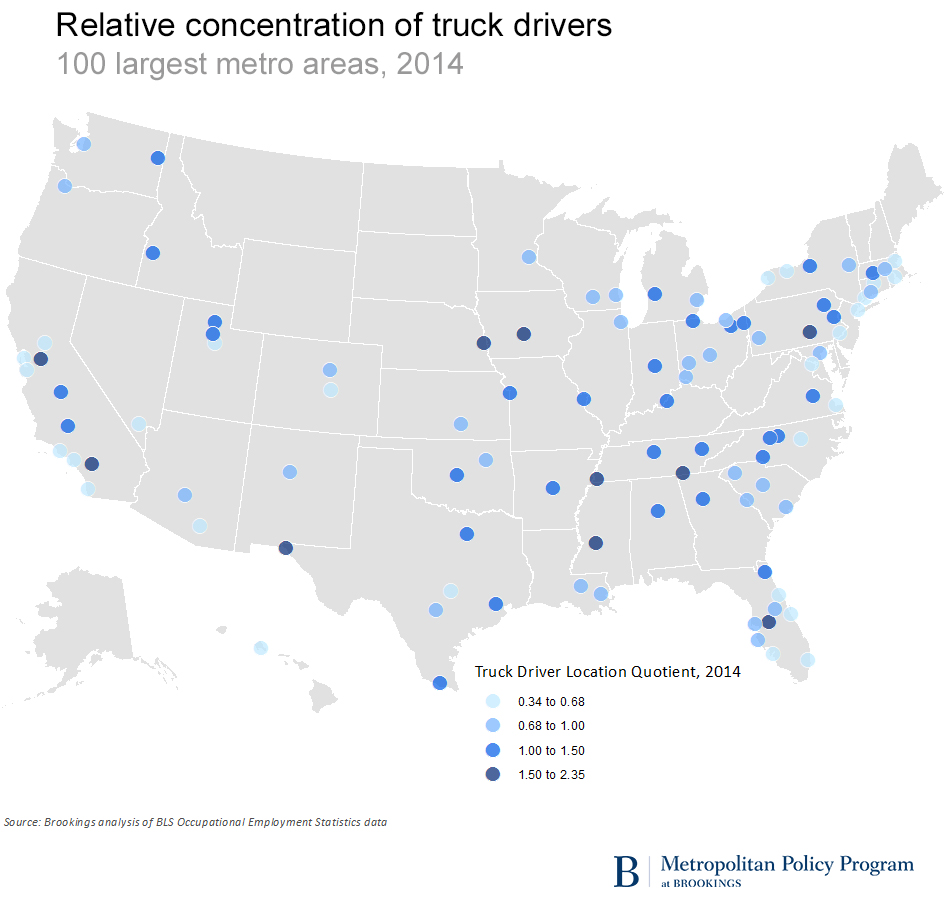 Note: Occupational concentrations are based on estimated location quotients for heavy and tractor-trailer truck drivers (SOC 53-3032) only.

For instance, the country’s 100 largest metropolitan areas employ almost 1 million truck drivers alone, led by enormous markets like Chicago and Dallas as well as logistics centers like Atlanta and Riverside. Looking at location quotients, though, offers an even clearer look into the relative importance of these workers in particular markets compared to the nation as a whole. Not surprisingly metro areas with sizable warehouse and distribution operations, such as Omaha (2.35), Lakeland (2.24), and Stockton (2.22), stand out the most in this respect, boasting employment concentrations twice as high as what appears nationally.

Although air traffic controllers are much fewer in number (about 23,000) compared to truck drivers, they are crucial to guiding flights and implementing NextGen technologies in the country’s busiest air hubs. Once again, location quotients are especially useful to identify these needs. While Washington and New York employ more than 2,100 air traffic controllers by themselves, Jacksonville (4.31) and Indianapolis (4.22) far exceed the typical concentrations seen nationally.

Together, these two occupations underlie a larger need to recruit and train thousands of workers in operating and maintaining the nation’s infrastructure—while identifying clearer pathways to better-paying jobs. In addition to the Federal Aviation Administration’s lead role replacing air traffic controllers, coordinated efforts among numerous federal, state, and local stakeholders must address these immense workforce challenges. Along with other regional initiatives, the country will not only be better positioned to identify new talent, but also equip workers with the skills—and wages—they need to drive durable economic growth.