The recent release of the Census Bureau’s American Community Survey data showed a surprisingly pervasive pattern of white population gains in the nation’s largest cities. This counters decades of white losses for many individual cities, and a two decade loss of whites for the combined populations of the nation’s 50 largest cities (See Figure 1). 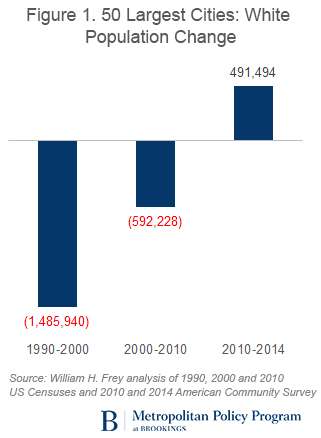 The new survey data show that between 2010 and 2014, 24 of the nation’s 50 largest cities experienced white gains, five sustained white losses, and 21 did not show a statistically significant change in their white populations. (See Table 1) This contrasts with 2000-2010, when 15 cities gained whites while 35 experienced white population declines; and 1990-2000, when there were 19 white gainers compared with 31 white losers.

But most noteworthy are cities that reversed decades of white decline. These include Detroit which registered a modest 2010-2014 white gain of 14,000 after sustaining white losses for the past 60 years. Other white gainers after at least 20 years of white losses are New York City, Los Angeles, Dallas, Louisville, Nashville, Baltimore, Kansas City, and New Orleans.

The impetus for this change is undoubtedly related to the post 2010 revival of big city growth that has been documented by earlier Census Bureau estimates.  While whites are not leading that growth in most cities, they are clearly participating in it. And among the combined 50 largest cities, white gains are greatest for 25-34 year olds (and their children) as well 55-74 year olds (See Figure 2). 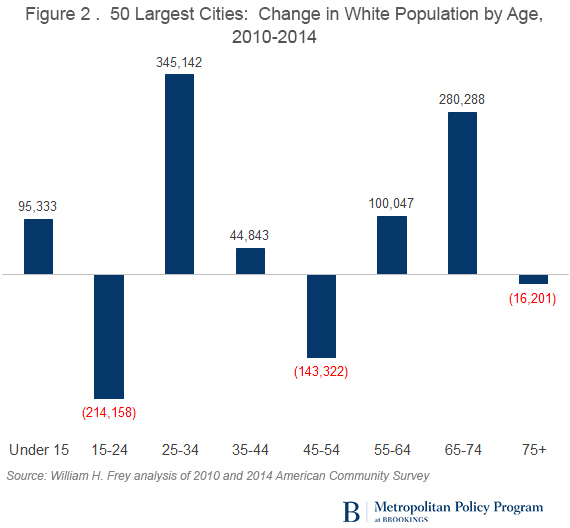 Some of these gains are certainly related to the recent uptick in the attractiveness of cities to young adults and retirees. However, white migration back to the city is not necessarily the main reason these gains exist: The large millennial and baby boom generations are inflating young adult and retirement age populations practically everywhere across the nation due to what demographers call cohort replacement. Still, these new numbers suggest that many big cities are sharing in the national gains of whites in these age groups.

Despite this noteworthy phenomenon, it is not likely that the nation will see substantially whiter big cities in the future. Fully 32 of the nation’s 50 largest cities are “minority white” (See Table 2); and even factoring in the new shifts, only four cities—Denver, Detroit, New Orleans, and Washington D.C.—showed (small) statistically significant increases in their white population shares between 2010 and 2014. For most of the remaining city gainers, racial minorities contributed more substantially than whites.

Furthermore, the national white population is slated to decline in about a decade, and this is already the case for the white population under age 20.There is also the possibility that the recent city revival could be short-lived and related to the plight of struggling millennials who may really prefer suburban living but are still unable to benefit fully from the post -recession economic recovery. Nonetheless the new white city gains indicate that long term trends like city white flight are not irreversible, even if the current turnaround winds up being a short-lived phenomenon.