While much attention is correctly given to alleviating the persisting segregation of blacks in many American cities, it is also important to recognize a newly emergent shift to the suburbs among blacks from major cities with established black populations. Black population losses have been occurring in some cities since the 1970s. However, the magnitude and pervasiveness of black city population losses during the first decade of the 2000s was unprecedented. As discussed in my book “Diversity Explosion,” the black population of the combined central cities of the 100 largest metropolitan areas declined by 300,000 between 2000 and 2010. This is the first absolute population decline among blacks for these cities as a group. 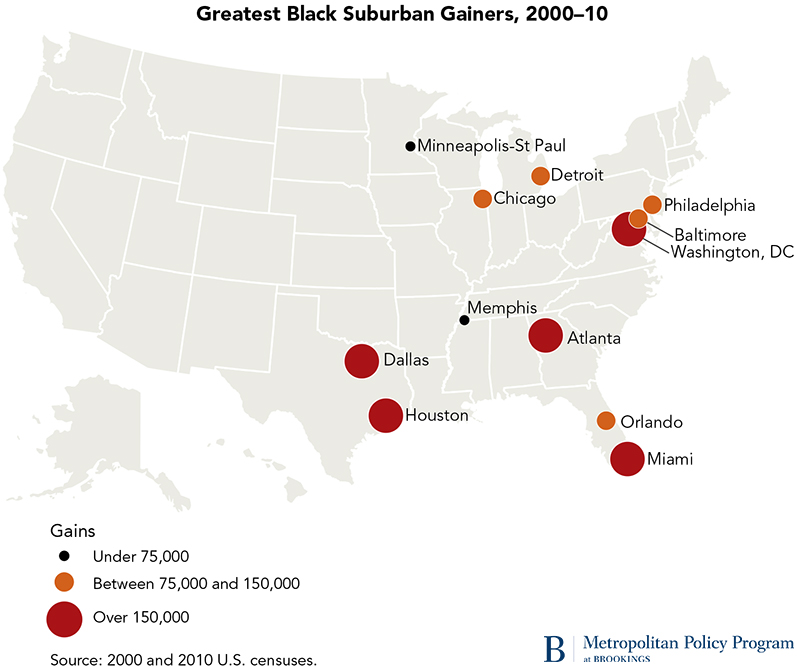 Three cities with the largest black declines—Detroit, Chicago, and New York—were among the primary destinations for blacks during the Great Migration out of the South in the first part of the 20th century. However, black losses were not confined to northern cities. Southern and Western cities such as Atlanta, Dallas, and Los Angeles were also among those losing blacks in 2000-2010.

Much of that population is suburbanizing. Metropolitan areas in the growing parts of the country are registering the greatest numeric gains in suburban black population. The suburbs of Atlanta, Houston, Washington, D.C., and Dallas experienced the largest increases in black population during 2000-2010, although Detroit and Chicago also make the list, due in part to large black losses from their central cities (see map). Among the largest 100 metropolitan areas, 96 showed gains in their suburban black populations. Of these, 76 had larger increases in the past decade than in the 1990s. Leading black movement to the suburbs are the young, those with higher education, and married couples with children—attributes that characterized white suburbanization for almost a century. While delayed for decades, a full scale suburbanization of blacks is finally underway.