Recently, we highlighted how the population is surging in some of the most drought-stricken areas of the country, straining water infrastructure in California, Nevada, and other parts of the Southwest. Yet, many flood–prone regions are also seeing an uptick in population as well, leading to additional concerns over the resilience of their existing water systems in the face of greater climate pressures, investment needs, and an assortment of governance challenges.

While the risk of flooding can fluctuate daily—as tracked by the U.S. Geological Survey—several areas have historically absorbed the brunt of damage, including those near low-lying coastal lands or major inland waterways. The Federal Emergency Management Agency (FEMA) measures many of the hazards associated with flooding at a regional scale and maps vulnerabilities to better assess future risks. As part of the National Flood Insurance Program (NFIP), FEMA also tallies the total number of flood losses in each locality. The count reveals a remarkable concentration of damage in many of the country’s fastest-growing markets. 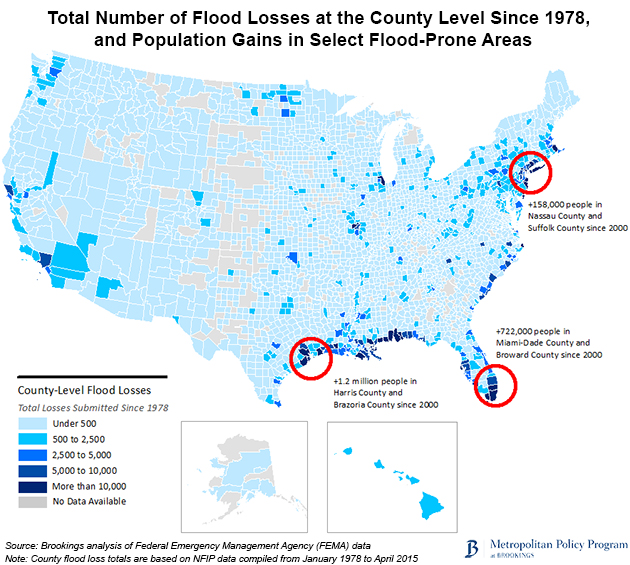 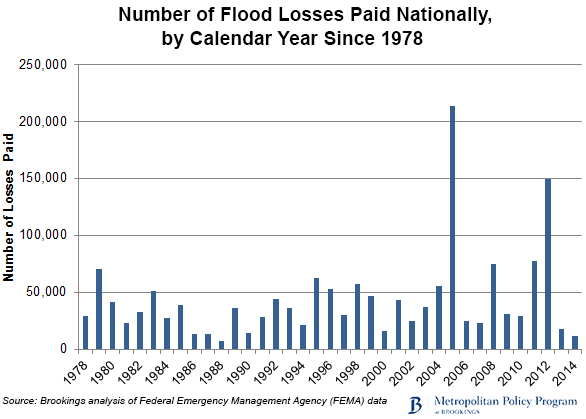 Nationally, more than 2 million flood losses have been submitted since 1978, with payments exceeding $51 billion. The number of FEMA losses has remained fairly constant over time, despite spikes in 2005 and 2012 associated with Hurricanes Katrina and Sandy, respectively. Significantly, though, just 25 counties have accounted for 940,000 (46 percent) of these losses. The same 25 counties, moreover, have seen their populations grow by more than 2.5 million since 2000 alone, or about 100,000 people each, much higher than the average gain of around 15,000 people across all U.S. counties.

Although numerous flood-prone areas in Louisiana, such as Jefferson Davis Parish and Orleans Parish, have shed thousands of residents in the wake of destructive storms, many vulnerable parts of Texas, Florida, and New York continue to record large population gains. For example, Harris County and Brazoria County near Houston have endured 111,000 flood losses over the past few decades—in addition to several disastrous floods in the last couple months—but have added almost 1.2 million people since 2000. Likewise, Miami-Dade County and Broward County in Florida and Nassau County and Suffolk County in New York, four counties with mounting flood concerns, have attracted more than 880,000 people combined over the same span.

To tackle these challenges, many regions are investing in more resilient infrastructure, better quantifying potential flood impacts, and seeking a wider range of financial tools in support of various adaptation strategies. Through a newly established Office of Recovery and Resiliency, for instance, New York has aimed to enhance coastal protection and accelerate plans for more sustainable development. Similarly, efforts like the Rockefeller Foundation’s 100 Resilient Cities Challenge are directly helping places such as New Orleans, Norfolk, and Boston adopt innovative planning strategies, create new designs, and forge stronger partnerships. Together, these initiatives are equipping residents, businesses, utilities, and other regional entities with the resources they need to begin addressing their long-term flood concerns.

Weakening environmental reviews for transportation infrastructure is a bridge too far