The “diversity explosion,” described in my recent book, is altering all parts of American life but particularly the lives of our younger population. As the white population ages and whites continue to decline in numbers among our under-30 population, as recent Census tabulations project, a growing portion of America’s children are racial minorities from a kaleidoscope of backgrounds in terms of their parents’ or grandparents’ place of birth. Origin countries include Mexico, China, the Philippines, India, Vietnam, El Salvador, Korea, the Dominican Republic, Guatemala, Jamaica, Colombia, Haiti, Honduras, Ecuador, Peru, Taiwan, Brazil, and others.

A dramatic remaking of the nation’s child population is under way; in growing parts of the country growth of the child population is synonymous with the growth of minority children. More than one-third of the 100 largest metropolitan areas now have minority-white child populations. California and Texas house the largest number of these metropolitan areas, and Hispanics constitute the largest minorities. Florida, Georgia, and Arizona each contain more than one of these metro areas; the newest include Atlanta, Orlando, and Phoenix. And in many other “whiter” areas, such as Allentown, Pa. on the periphery of the New York megalopolis, the share of minorities among children is increasing. 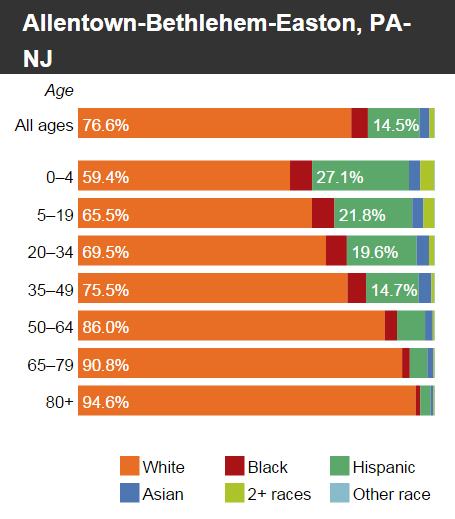 Of course, metro areas such as Los Angeles, Miami, and New York are used to accommodating large numbers of young children from dozens of foreign countries. Yet the first-generation immigrant children in large sections of the Southeast and Mountain West and scattered parts of “middle America” represent the front lines of the country’s diversity explosion. For an overview of U.S. county profiles by race and age, see the U.S. interactive map. 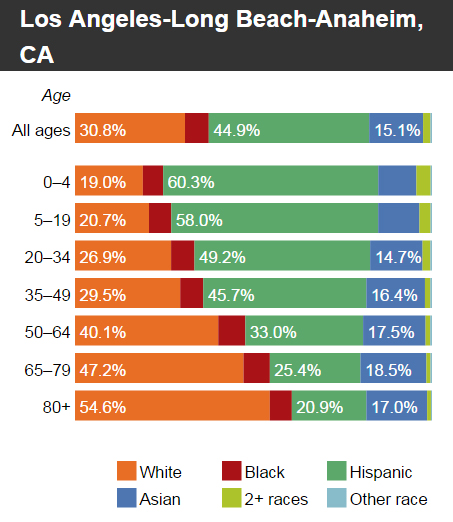