Green banks are sprouting across America. Rhode Island just authorized its own public-private green and other infrastructure bank, joining Connecticut, New York, Hawaii, and California. In addition, a half-dozen other states are exploring how to leverage public money with private to finance low-carbon technology.

Once again, the states are working out a smart, “bottom-up” response to a major national challenge. Once again, they have innovated on work of national import at a time of federal gridlock.

And yet, now the states’ self-help is running up against an avoidable obstacle: the lack of public dollars available to seed the creation or expansion of new banks. In state after state, strong interest in green banking or strong demand for green bank products has collided with the limited resources available to capitalize the new institutions. The Connecticut Green Bank has so much demand for its C-PACE product that it must raise external private capital from warehouse lenders to satisfy demand. Rhode Island’s new Infrastructure Bank reflects in large part a reallocation of resources from other programs. More broadly, the 50-state map could be populated by many more green banks if more start-up capital were available. 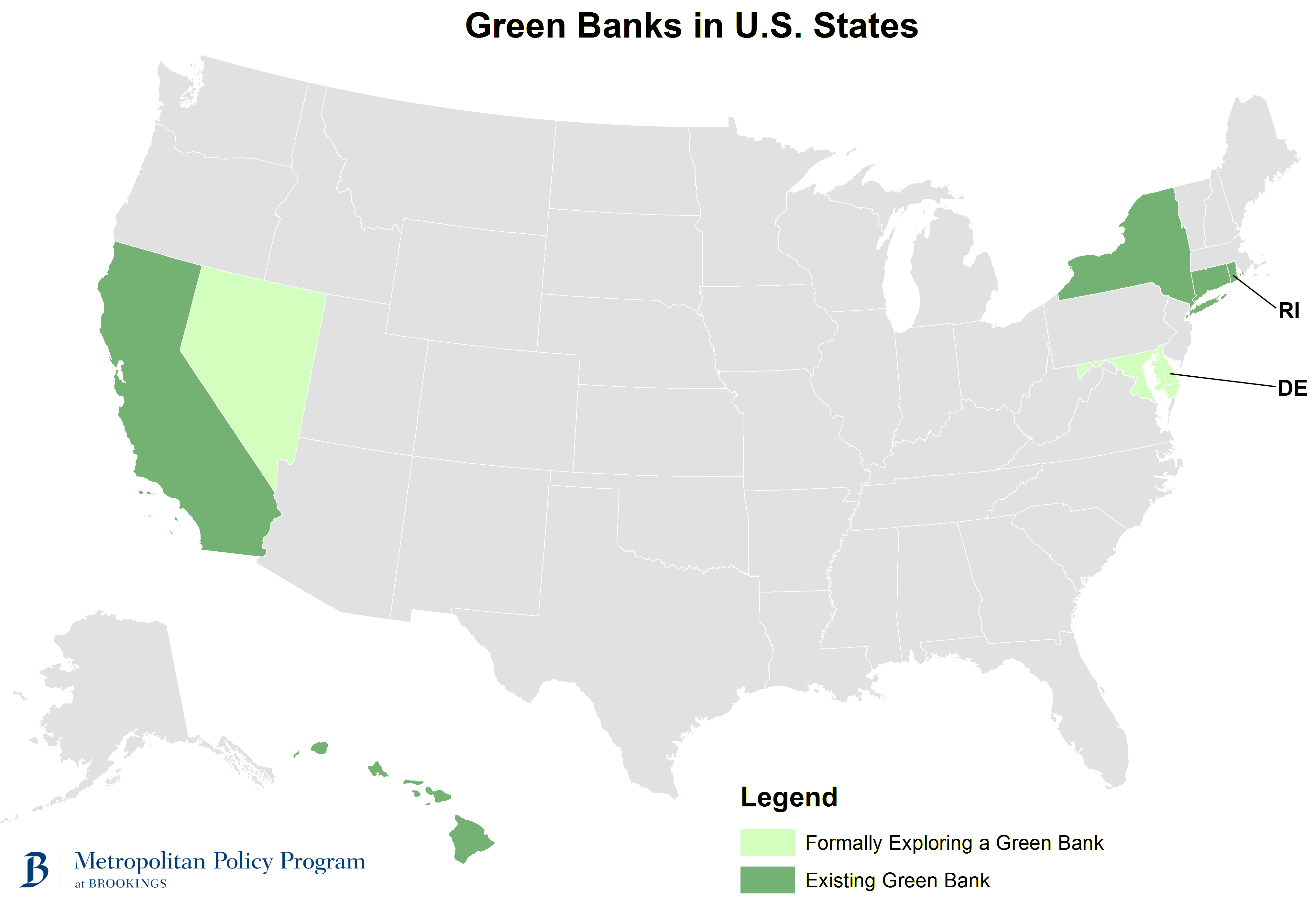 Which is where Washington can and should help. While the federal government has not been able to lead on the design of modern clean energy and infrastructure finance entities, it now has the opportunity, with its billions of underutilized dollars already allocated for the kind of market-making activities being organized by the states’ green banks, to help capitalize and scale up the new banks by smoothing their access to relevant federal dollars.

The needed help, moreover, is not hugely taxing. Support requires no major change of policy, for example. Instead, it requires mostly administrative action: clarifications of definitions, clarifications of eligibility, and some modest red tape reductions, as are detailed in a recent memo assembled by Reed Hundt (a co-author here) and Jeff Schub of the Coalition for Green Capital, with which the Metro Program has worked on these issues.

Numerous eligibility issues and definitions need clarifying about the use of literally billions of Department of Energy loans and loan guarantee dollars. Improved, quicker access to these funds could be a great help in capitalizing green banks. Similarly, a few borrower-eligibility and use clarifications—as well as moderation of excessive security rules—could turn several programs within the Department of Agriculture’s gargantuan Rural Utility Service into another source of capital for low-cost green bank financing. And for that matter the market for green bank financing of solar-plus-storage systems would be greatly increased if the Internal Revenue Service’s investment tax credit could be easily applied to batteries.

In any event, the point is simple: Significant federal dollars exist that could, with modest administrative adjustments, expand the nation’s green bank movement, with significant benefits for clean-energy deployment, regional economies, and the climate.

That the White House last week convened a well-attended meeting on these issues with multiple states, five relevant agencies, and others bodes well and points to the next needed phase of American federalism.

More and more the states and the regions will lead—on climate finance as well as much else. But when they do, Washington can and must work harder to be a responsive, supportive partner.

Co-Chairman, Coalition for a Green Bank