Racial neighborhood segregation is still prevalent in the U.S., though, as I discuss in my book “Diversity Explosion,” there are trends pointing to its decline. It is useful in any case to observe the kind of neighborhood in which the “average” white, black, Hispanic, and Asian resident lives to provide a benchmark of where things stand today. This picture is given in the figure, which pieces together all of the neighborhoods in the United States, including those in metropolitan and nonmetropolitan areas of all sizes and in every part of the country, for the “average” perspective nationally. 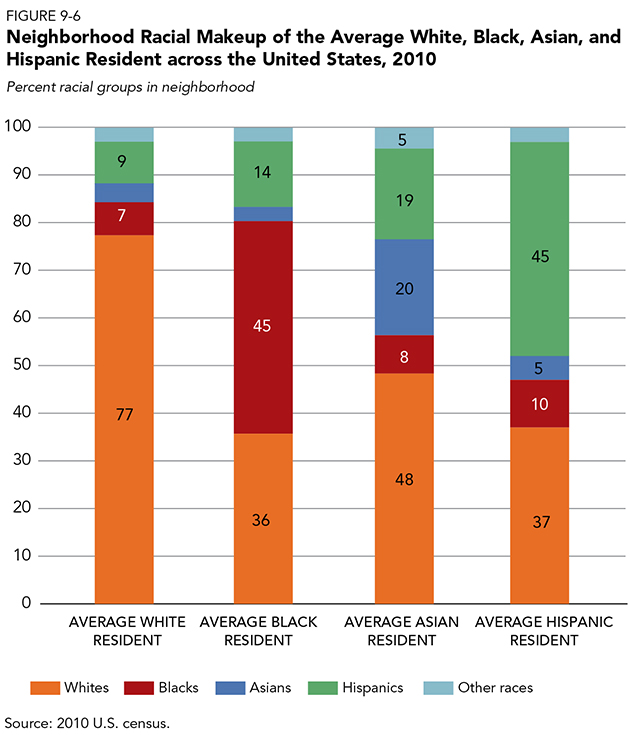 The average white resident, for example, lives in a far less diverse neighborhood—one that is more than three-quarters white—than residents of any of the other groups. Nonetheless, the average white person today lives in a neighborhood that includes more minorities than was the case in 1980, when such neighborhoods were nearly 90 percent white. Moreover, each of the nation’s major minority groups lives in neighborhoods that are at least one-third white, and in the case of Asians nearly one-half white. Hence, there is a tendency toward more integrated living among these groups as more minorities are relocating to white-dominated or multiracial neighborhoods.

Overall, population shifts that are bringing Hispanics and Asians to previously whiter regions will almost certainly continue to alter the neighborhood experiences of these groups by bringing them into more contact with whites than was the case in the past. The nation’s blacks have seen a marked shift from a mostly “ghettoized” residential experience five decades ago to one that more closely follows the path of other racial minorities as more blacks move to more suburban and integrated communities, particularly in the South. So the broader migration patterns of blacks, Hispanics, and Asians are moving in the direction of greater neighborhood racial integration, even if segregation is far from being eliminated.