Water may be scarce in California and other parts of the Southwest, but people are flooding in, according to newly released Census data. The influx of residents into these areas not only coincides with a changing labor and housing market, but also has far-reaching implications for water infrastructure.

Although a number of water challenges beyond population pressures are emerging in these regions, drought concerns remain at the forefront, as illustrated weekly in the U.S. Drought Monitor. Based on a variety of climatic and hydrologic measurements, the data help gauge the intensity of drought conditions — from “abnormally dry” to “exceptional drought”—at the county level, and they reveal how the most severe, long-term drought impacts are gripping many Western localities. 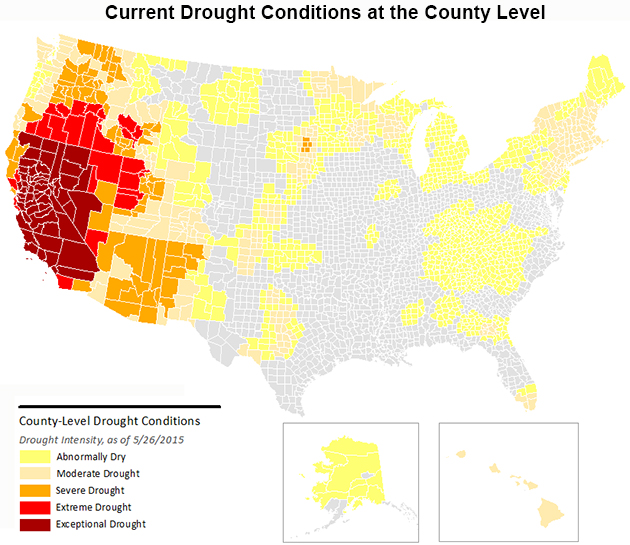 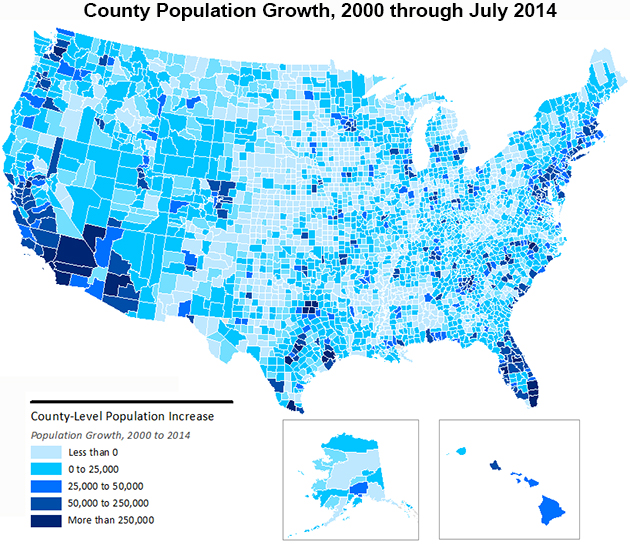 In total, the country’s population grew by about 45.2 million from 2000 through July 2014, most of which (25.8 million, or 57 percent) occurred in counties experiencing some level of drought. In addition, nearly 9.5 million more residents are living in counties that are currently dealing with a severe drought or worse, where crop losses are likely to occur, water shortages are common, and water restrictions may be imposed.

The largest population gains have often been concentrated in the driest counties overall.  For example, of the 10 counties where population has increased the most since 2000, seven are currently in the midst of a drought. Los Angeles County and Riverside County, whose combined population climbed by almost 1.6 million over this span, are confronting some of the most exceptional drought conditions nationally, followed closely by San Diego County and Maricopa County, near Phoenix. Meanwhile, several rapidly growing, low-lying areas in Texas face the opposite problem of flooding, including Harris County, near Houston, which has added nearly 1.1 million residents since 2000.

Despite attempts to curb consumption, promote additional financing options, and shine more light on these issues, water use remains high in many dry areas, especially among farmers and utilities. In the midst of these challenges, though, some of the fastest-growing places like Las Vegas, San Diego, San Antonio, and Austin are pioneering new ways to recycle and conserve water, while increasing flows into urban streams and rivers. These innovative steps represent crucial steps to address the country’s needed investment in water infrastructure, as states and localities look to overcome a host of economic and environmental costs in the years to come.