More than ever, major metropolitan suburbs reflect the rest of American society. As discussed in my book, “Diversity Explosion,” this is especially the case with respect to race. Growing numbers of suburban areas are achieving what might be termed “melting pot” status. In 36 of the 100 largest metropolitan areas, minorities represent at least 35 percent of the suburban population, approximately the same share as the nation. Within these, 16 have majority-minority populations, up from just eight in 2000. With a few exceptions such as suburban New York and Chicago, these melting-pot suburbs are located in the South and West (see map). Hispanics are the predominant minority group in most of these suburban areas, an edge they held already by 1990 and continue to hold today despite increasing shares of blacks in the suburbs. Among the 36 highly diverse suburbs, Hispanics represent the largest minority group in 25 versus nine for blacks and two for Asians. 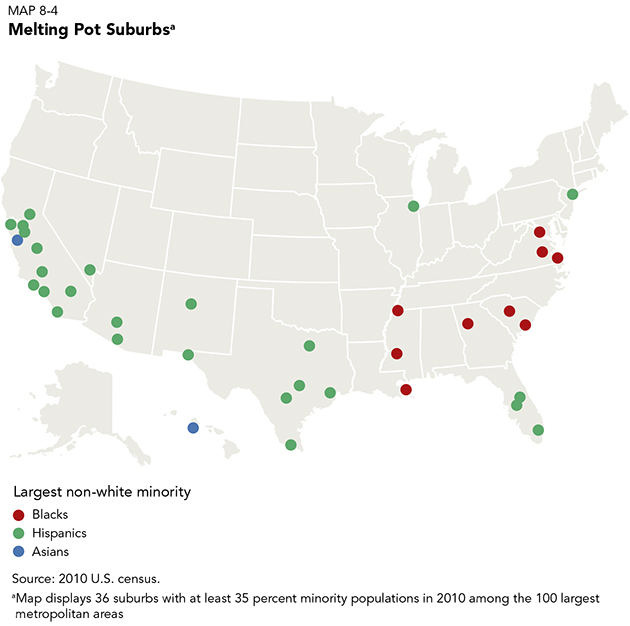 Still, there are wide variations in suburban racial profiles, which mirror regional demographic patterns. For example, the suburbs where Hispanics constitute the largest part of the population (in this case, more than 50 percent ) are on the Texas border, including El Paso and McAllen, in addition to the interior California areas of Fresno and Bakersfield. Those with the highest black percentages are in the Deep South: Jackson, Miss.; Virginia Beach, Va.; and Columbia, S.C. The largest Asian suburban population shares are in Honolulu and San Jose, Calif.

We are only at the beginning of seeing demographic forces that are diversifying the nation’s suburbs, and the changes have important implications for both policy and politics. Suburbs will face greater demands for services needed by new populations, particularly those with different economic circumstances and cultural linguistic backgrounds. Increasing suburban diversity may cause suburbs to become political battlegrounds in local and national elections, making them less reliable bases for Republicans who have traditionally depended on demographically homogeneous suburban voting blocs. In essence, the historically sharp racial divisions between cities and suburbs in metropolitan America are becoming more blurred than ever.