Every April 1st, employers submit applications to the United States Citizenship and Immigration Services for temporary employment visas for foreigners in specialty occupations.

And every year businesses report frustration with both the limited number of visas and  the first-come first served system for allocation. At the crux of the complaints: If the number of applications submitted during the first week of April exceeds the 85,000 cap, visas are awarded via lottery.

Over the past three years, the cap has been reached more quickly and all indications point to high demand again this year.

To help inform the H-1B debate, we analyzed new data (received through a Freedom of Information Act request) showing which metropolitan areas received the most H-1B visa approvals in 2013.

Our past research examined the number of applications that employers submitted by metro area, but those data did not indicate how many of the visas were approved.  As such, they were a measure of demand for these workers. With approvals data, we can tell which regional labor markets ultimately received the most high-skilled foreign workers in 2013. That year marked the first since 2008 in which the cap was reached in the first week. USCIS instituted a lottery that ultimately denied 39,000 H-1B visa applications.

These data show that high-skilled foreign workers are concentrated in a small number of places. Half of all approved H-1B petitions nationwide went to only nine metropolitan areas, and one-quarter went to just three: New York, Dallas, and San Jose—home of Silicon Valley. New York, with over 29,000 approvals, had by far the highest number. Dallas and San Jose had almost 20,000 and 16,000 approvals, respectively. The 14 metro areas with at least 5,000 approved applications in 2013 are listed in Table 1. Durham, N.C.—a hub of education and R&D— received a surprisingly high number of approvals, given that it is a much smaller metro area than the others on this list. 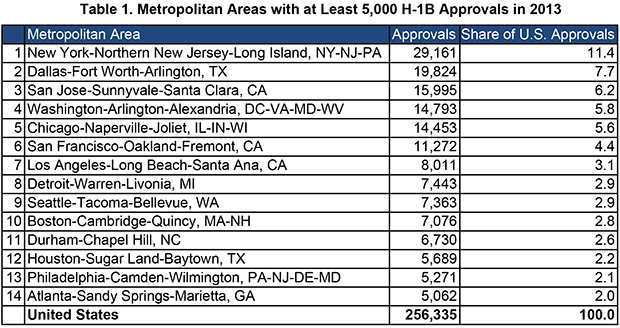 Not surprisingly, Durham ranks first among metro areas for the ratio of H-1B approvals to its total employed population. The top 10 metro areas by this measure (see Table 2) include large finance and technology hubs (e.g. San Jose, Dallas, San Francisco, and Seattle), along with smaller metro areas that are home to large research-intensive universities (Durham, College Station, and Ann Arbor).

Lawmakers of both parties agree that we should reform the visa system for high-skilled workers. But reaching compromise on the details has proven to be difficult. At Brookings last week, the inaugural Dreier Roundtable brought together representatives from the administration and Congress to discuss policies toward high-skilled immigrants, including reforming the H-1B visa program and measures to retain foreign students studying STEM fields.

A panel discussion highlighted the complexity of the issues involved at the national level, but did not address the unique and varied role that these immigrants play in regional labor markets. Some policymakers, such as Michigan’s Governor Snyder (R) and Senator Rand Paul (R-Ky.), have proposed regional visa programs for allocating visas for high-skilled workers based on local labor market needs. Former Massachusetts Governor Deval Patrick (D) proposed the Global Entrepreneurship in Residence Program to get around the H-1B cap by allowing foreign graduates of Massachusetts universities to start their businesses in Massachusetts.

Ultimately, we believe the metro geography of H-1B demand and supply should more closely inform how visas are allocated, as well as how the proceeds of the program are distributed to upgrade native-born workers’ skills.