Late last year the World Economic Forum released its list of the 10 global trends that will preoccupy policymakers in 2015. Unsurprisingly, income inequality ranked first. However, Larry Summers identified the world’s second most pressing challenge as “persistent jobless growth”—a phenomenon in which economies expand but not in ways that generate sufficiently widespread labor market opportunities.

Summers examined this issue from the perspective of major world regions, but how is this phenomenon playing out in the world’s major cities? Our recent Global Metro Monitor report finds that, five years after the 2008 financial crisis, the world’s largest metropolitan areas have yet to regain steady employment growth rates. Growth in income, measured as GDP per capita, is back on track in the majority of the world’s 300 largest metropolitan economies, but rates of job creation are actually decelerating. Average annual job growth in the 300 largest metropolitan areas declined from 2.1 percent in the 2001–07 period to 1.7 percent between 2009 and 2014. If overall employment growth had continued at the 2001–07 clip over the past five years, these metro areas would have an additional 12.8 million jobs.

This slowdown is concerning. The world’s major metropolitan areas have traditionally been engines of growth and job creation thanks to their higher productivity, greater economic dynamism, and larger concentrations of population. Over the past five years, however, three trends point to a shift in large cities’ contribution to job growth:

From 2003 onward, metro economies have registered faster employment growth than their national economies, but this difference is shrinking. In 2007 the employment growth rate differential between the world’s 300 largest metro areas and their nations was 1.5 percentage points; in 2014 this gap had shrunk to less than 0.5 percent (Figure 1). 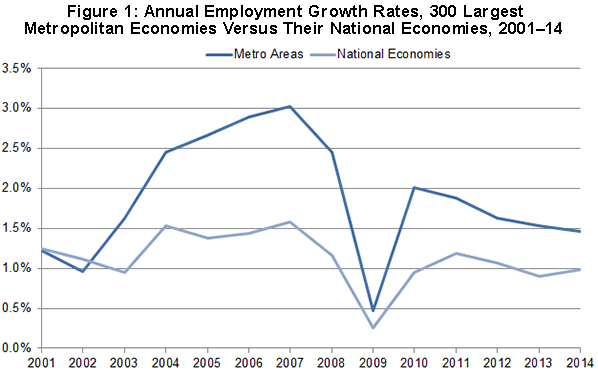 An even more striking trend is that job growth rates in developing metro areas have nearly converged with growth rates in developed metro areas. Employment in developed metro economies grew 1.1 percent per year between 2000 and 2007 and by a slightly slower 1 percent rate from 2009 to 2014. In contrast, developing metros experienced a significant reduction in the pace of job creation, from 3.4 percent per year between 2000 and 2007 to 2.5 percent for the 2009–14 period. The gap was particularly narrow in 2014, when the difference in job creation rates between developed and developing metros was only 0.5 percentage points (Figure 2). 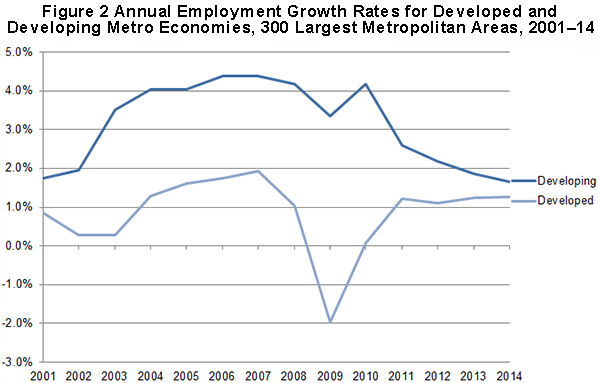 Asia-Pacific is not the only region of the world where employment growth rates have slowed considerably (Figure 3). Job growth in Middle Eastern and African metro areas dropped from 4.1 percent annually from 2000 to 2007 to 2.2 percent from 2009 to 2014. 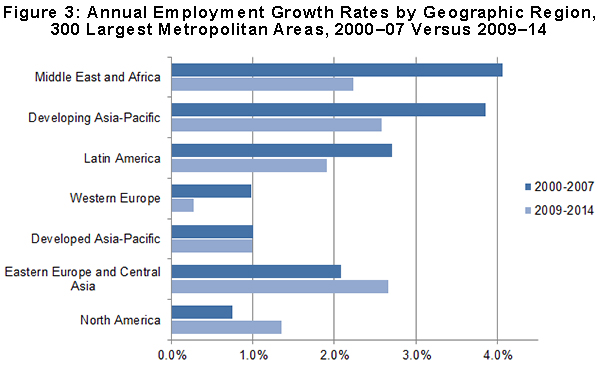 Cities have historically been global hubs of economic advancement, thanks in no small part to their ability to generate labor market opportunities. Since 2010, however, job growth rates in the world’s 300 largest metro areas have slowed each year. Economists have pointed to low post-recession growth in advanced economies, the transition of developing nations to less labor-intensive economic activity, and the potential displacing effects of technological automation on employment as potential causes of this slowdown. No matter the cause, slower job growth in our major metro areas, given their critical role in advancing prosperity, should give policymakers pause.

Did the pandemic advance new suburbanization?

John D. Ratliff
Wednesday, May 11, 2022
Get daily updates from Brookings