I recently posted an analysis at the Harvard Business Review that demonstrates an increasing geographic dispersion of early-stage venture capital (VC) in the United States. VC is critical because it seeds high-potential companies and spurs growth in the local economy,  so my findings were encouraging because they showed that more regions are getting in on the action.

To be clear, early-stage VC funding still remains highly concentrated in a small number of metropolitan areas. However, as my work suggests, the geographic reach of “first fundings,” or the initial round of professional venture investment, has widened over the last five years as the total number of deals has expanded nationally.

And that’s a good thing, suggests Brad Feld, a venture capitalist based in Boulder, Colo. and the author of a seminal book on how to build startup communities. “I’ve long believed that you can start a scalable company most anywhere, and every metropolitan area over 100,000 people should have a thriving startup community,” Brad says. “Your work shows that this is gradually becoming a reality.”

And so, with Brad’s remark in mind, I thought it would be a good idea to post some figures on regional concentrations of early-stage capital in the U.S. The table below shows the top 20 metropolitan areas for first fundings in 2014 and for first-funding density (taking into account population). In line with Brad’s suggestion, I excluded metropolitan areas with fewer than 100,000 people. Download the table here (PDF).

The left-hand side of the table is sorted by the absolute number of deals, or the places where the most first-round deals occurred in 2014. The right side is sorted by a per-capita location quotient of first fundings—a figure that takes into account the population of each region and normalizes it against the nation as a whole. A metro area with a location quotient of 1 has the same first-funding density (deals per capita) as the entire United States, while metros with values greater or less than 1 have densities higher or lower than the nation as a whole.

As the numbers on the left show, the top 20 metropolitan areas by total number of deals accounted for 70 percent of all first venture fundings in 2014; the top four accounted for more than 40 percent. The well-known major tech hubs (San Francisco and San Jose, Calif.; Boston and Cambridge, Mass.; New York; Seattle; Austin, Texas) led the way, along with large cities that are growing their startup activities (Los Angeles, Washington, Chicago).

But surely population plays a role here: Larger cities, on average, should have more deals. So to get a feel for regions that are active in early-stage venture deals but that might not make it into the top 20 because of their smaller size, see the right-hand side.

Here, new names crack the top 20: Boulder; Ann Arbor, Mich.; Champaign-Urbana, Ill.; and Charlottesville, Va., to name a few. These metros happen to be home to some of the most prestigious public universities in the United States and indeed the world. They also each had annual venture capital first fundings on a per-capita basis in excess of 2.4 times the U.S. average. Boulder, in particular, stands out, with a location quotient of 7.2. 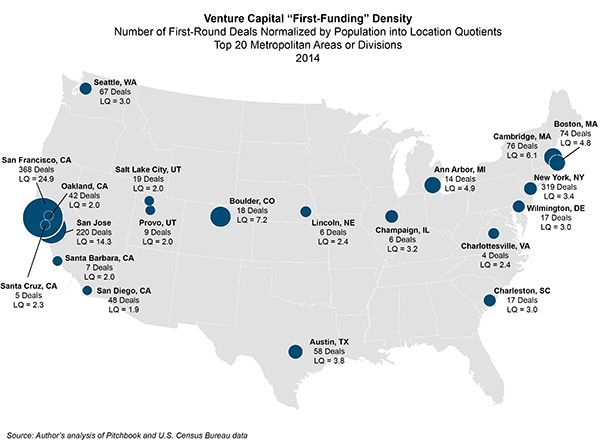 A few of the regions that lead in sheer numbers are also at the top of the list when adjusting for population, which makes them major tech hubs—they are both large and dense. These well-known regions led the way in 2014—particularly San Francisco, at nearly 25 times the national average. Yet it is good to see the rise of other places: Baltimore and Phoenix among large metros, and Champaign-Urbana; Lincoln, Neb.; and Provo, Utah among smaller.

We should applaud these developments—high-growth companies have the ability to boost growth and employment in their hometowns. The fact that companies that are being targeted as potentially high growth are appearing in more regions—both large and small—is an encouraging step toward shared prosperity in the U.S.