Over the past decade, the New International Trade Crossing (NITC)—a proposed bridge between Detroit and Windsor, Ontario—has been in the works to improve connectivity at one of the world’s busiest border crossings and sites of commerce. Supported by an innovative, binational public-private partnership between the United States and Canada, the $2 billion-plus project will not only relieve pressure on the increasingly congested, 85-year-old Ambassador Bridge, which handles over 8,000 trucks daily, but also reinforce Michigan’s role as a global trading hub.

Uncertainties over funding and vocal opposition have long stalled the NITC’s progress, but the project just cleared a major hurdle toward completion when Canada agreed to pick up a $250 million tab for the bridge’s customs plaza. In addition to the thousands of local workers and industries that stand to benefit from this latest move, metropolitan areas across the United States and Canada will reap economic rewards for years to come.

Protecting the U.S.-Canadian trading relationship is of vital significance to both countries’ economies and facilitated by key infrastructure investments. With over $650 billion in goods exchanged each year, Canada represents the largest trading partner for the U.S., outranking China, Mexico, and Japan. At the same time, those goods flow to an impressive amount of places on both sides of the border, from Seattle and Houston to Vancouver and Montreal, helping explain why Canada has taken a lead role investing in the NITC.

Detroit is easily the most important of these trading depots, especially when it comes to truck movement. Last year, more than 1.6 million trucks passed through the metro area, which represented the busiest border crossing between the U.S. and Canada and the second-busiest in North America next to Laredo (1.9 million trucks). An upcoming release in our Metro Freight series will reveal a similar result, showing how Detroit funnels approximately $131 billion, or nearly half, of all goods that move by truck between the U.S. and Canada. By comparison, the next highest border crossing, Buffalo, transports about one-third this value by truck ($51 billion), followed by several rural regions. 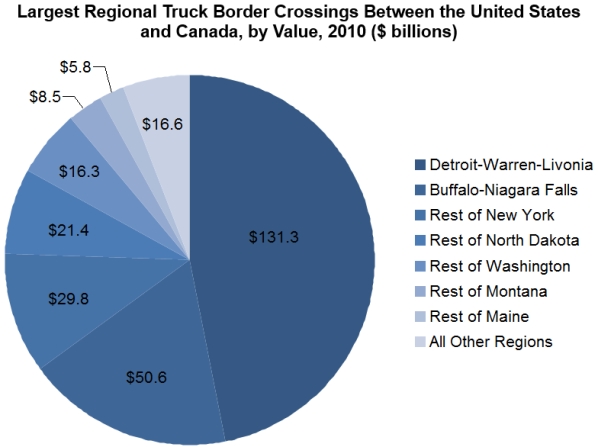 Note: “Rest of” designations refer to nonmetropolitan portions of each state. For instance, the “Rest of Washington” includes all rural regions outside metropolitan areas such as Seattle and Spokane.

In turn, a variety of markets across the U.S. rely on Detroit to profit from Canadian trade. For example, only 4.7 percent of the $131 billion carried on these trucks ($6.2 billion) is produced or consumed locally in Detroit. Instead, the vast majority of this value travels to and from large markets like New York ($4.7 billion), Chicago ($4.4 billion), and Los Angeles ($2.5 billion), including anything from electronics to metals to agricultural products.

As policymakers look to target more freight investments in the future, the NITC clearly assumes national importance. The U.S. already faces an enormous backlog of infrastructure projects along the border, and it’s time for a more coordinated, proactive approach—through a national freight investment program— that can further support trade in particular regions.