Neighborhood segregation between Hispanics and whites is lower than the markedly higher segregation levels between blacks and whites. Yet, as shown in my book Diversity Explosion, Hispanic segregation does vary across regions of the country, reflecting settlement histories of different Hispanic nationalities. Segregation levels (defined on the map) range from low values of 25 to a high value of 63. Among the most highly segregated areas are those that served as major gateways for Hispanic immigration, especially Los Angeles and New York, but also Miami, Chicago, San Francisco, San Diego, Dallas and Houston. These areas contain established Hispanic enclaves that continue to receive new waves of immigrants, keeping their segregation levels relatively constant. 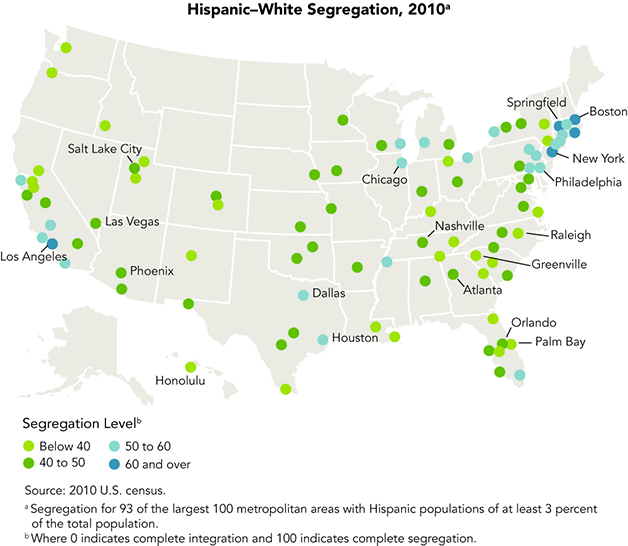 Another set of somewhat highly segregated areas is located in the Northeast, including Boston, Providence and Philadelphia, all areas where Puerto Ricans comprise a sizable share of the Hispanic population.

Those areas with lower Hispanic-white segregation are spread over the country, particularly in the South and the interior, areas where Mexicans are a prime nationality and containing small but quickly growing Hispanic populations (e.g. Atlanta, Charlotte, and Salt Lake City). This is significant because as Hispanics continue to disperse away from highly segregated core settlements to these newer destinations, more of them will reside in less segregated neighborhoods.