The wave of devolution and regional empowerment sweeping the United Kingdom has received ample coverage in the press, but an equally ambitious reform process underway across the English Channel has gone largely unnoticed. Dubbed “le big bang de régions,” President François Hollande’s government is about to redraw the map of France, with major implications for the nation’s governance.

Today the French National Assembly advanced the latest draft of a bill that will reduce the number of regions, the country’s highest tier of sub-national governance, from 22 to 13. After one last read by the Senate, the final bill is expected to be ratified by the end of the month. Notoriously centralized France is preparing to unleash much stronger regions. 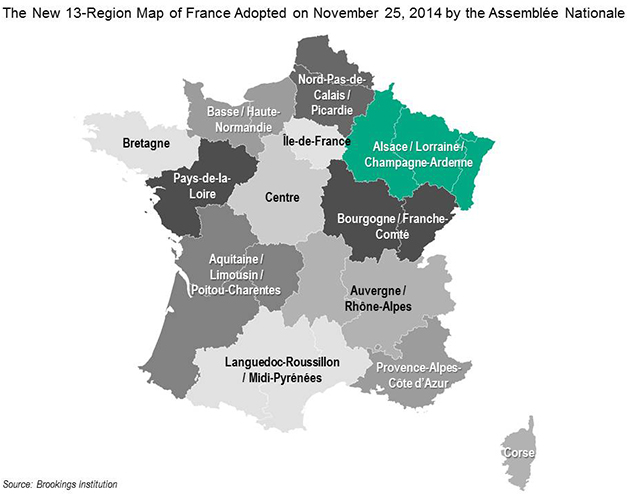 Several motivations lie behind the move. One is administrative clarity: France’s infamous “mille-feuille” of local governments breeds waste and duplication and still leaves many citizens unsure of exactly which layer of government is responsible for what service. The deficit-conscious central government also hopes to achieve administrative economies of scale.

The primary and most compelling rationale for reform, however, is economic.  The reforms are designed to turn France’s regions into engines of economic development. Redrawing regional boundaries is only the first step. Assuming passage, next year the newly formed regions will hold fresh elections, after which they can look forward to a significant expansion of powers and purse.

At present, French regions effectively serve as collectives of smaller local governments. Managing the day-to-day has left little room for economic strategy making or long-term planning. Although France has one of the largest public sectors in Europe, its regional governments spend approximately one-tenth the European average per capita—revealing a void of capacity and resources at a critical geographic scale. Hollande’s plans will begin to rectify this imbalance by devolving sole authority over employment and training policy, secondary education, transportation projects, regional planning, and large scale infrastructure initiatives to regions. Most importantly, regions will be empowered to craft and execute their own “territorial strategies” for economic development.

The new regions can also look forward to heightened profiles on the international stage.  Presently, French regions are small compared to those in neighboring countries, averaging only 2 million residents. The reforms will increase that average to 4.8 million and boost regions’ stature with investors and peers commensurately.  Crucially, larger regions can look forward to larger and less fragmented pots of European Union money to direct towards strategic initiatives, and increased revenue-raising power over larger bases should ease access to capital.

Regional reform comes on the back of reforms to metropolitan area governance passed in January, which are intended to enable France’s 14 largest metropolitan areas—together fragmented across nearly 4,000 municipalities—to act more like the cohesive economic units they represent.

It’s telling that the cornerstone of Hollande’s strategy to modernize and strengthen France is regional empowerment. The move responds to a reality across many countries that legacy political and administrative boundaries too rarely conform to the geography of the modern economy—a geography defined by labor markets and industry clusters of which the metropolitan area is the principal unit.

For that reason, French territorial reform should resonate in the United States, where gridlock and partisanship at the national level have only accelerated the rise in relevance of governors, mayors, and local civic networks to economic policymaking. Both are manifestations of the same global currents in governance. In more and more places, the subtitle to globalization’s story is proving to be the rise of the region.