Indian Prime Minister Narendra Modi’s visit to the United States this week has provided ample occasion to bring various aspects of the U.S.-India relationship under the microscope. From the business angle, there’s widely shared agreement that economic ties could be stronger between the two nations often termed “natural partners.” At the very least, all parties are seemingly committed to future growth in trade and investment.

As it happens, trade and investment have been growing quite rapidly between the two countries, albeit from low bases and with plenty of room for that hoped-for expansion. As our Brookings colleague Joshua Meltzer reports, the stock of U.S. foreign direct investment (FDI) in India stood at $28.4 billion in 2012, up from $4.8 billion in 2003, while the stock of Indian FDI in the United States increased from $350 million in 2002 to $5.2 billion in 2012—and that’s without a bilateral investment treaty or agreements on trade in services.

It also happens that recent research from Brookings puts these flows in terms of something that bears no risk of being lost in translation: jobs. Relying on data from Dun & Bradstreet, our recent report on the geography of FDI in the United States reveals both the origins and destinations of Indian FDI in the United States in terms of the number of jobs in the U.S. business establishments of Indian companies.

The map below shows where the approximately 43,000 U.S. employees of Indian-owned companies could be found across the United States in 2011, the latest year for which data is available. New York housed the most, with nearly 8,500 residents employed by Indian companies, followed by Detroit, Los Angeles and Chicago. Several smaller metro areas such as Peoria, Ill.; Fargo, N.D.; and Buffalo, N.Y. rise to the top of the rankings as well thanks to large investments by particular firms. The largest number of workers could be found in the computer systems design, business support services, data processing, traveler accommodation, pharmaceutical manufacturing, and aluminum processing industries. 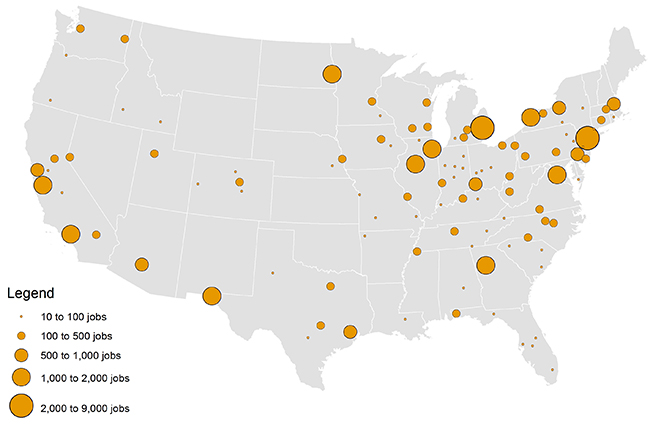 The next map shows the number of U.S. workers employed in the United States by companies headquartered in each region of India. Maharashtra, home to Pune and India’s business capital, Mumbai, clearly dominates with its companies such as Tata Sons Ltd., Hindalco Industries Ltd., and Sun Pharmaceuticals accounting for over half of all U.S. jobs in Indian-owned firms. However, just as the destinations of Indian investments in the United States vary widely, so too do the origins, with a total of 13 Indian states home to multinationals with U.S. investments. 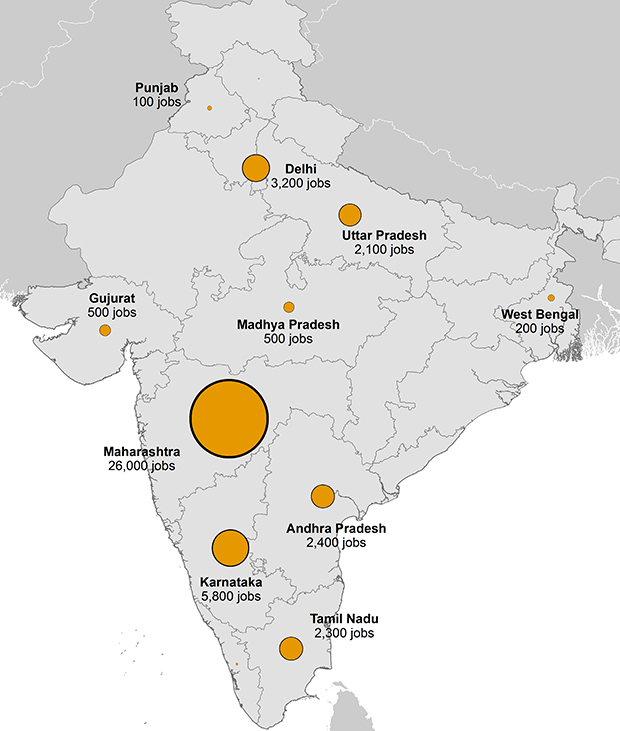 All this suggests that the ties between the two countries are more prolific and broadly based than the headlines may imply. The economic potential of increased trade and investment between the countries is huge, to be sure, and untapped opportunities abound. The two countries are far from starting from scratch, however. Businesses and also migrants, students and cities themselves have laid much of the groundwork for achieving the national leaders’ vision.

A previous version of the U.S. Jobs in Indian-Owned Business Establishments map contained an incorrect job total for Gujurat. It has since been corrected.