We recently released a new paper on foreign direct investment (FDI) in U.S. metro areas that reported that foreign-owned companies employ 5.6 million workers across the United States. We wouldn’t fault even our most worldly followers for asking “So what?” though. What makes this subset of companies active in the U.S. market special?

The answer is that these companies make inordinate contributions to national and regional economic development. In today’s rapidly globalizing economy, their importance is poised to increase.

At the most basic level, FDI represents a direct infusion of capital into the U.S. economy from abroad. At a time when U.S.-based companies remain reluctant to invest in productive capacity at home, foreign firms have filled some of the gap. In 2011 they accounted for an outsized 15.2 percent of annual investment into the country’s capital stock, compared to their 6.2 percent share of total value added. Important qualitative characteristics lie just below these top-line numbers too: 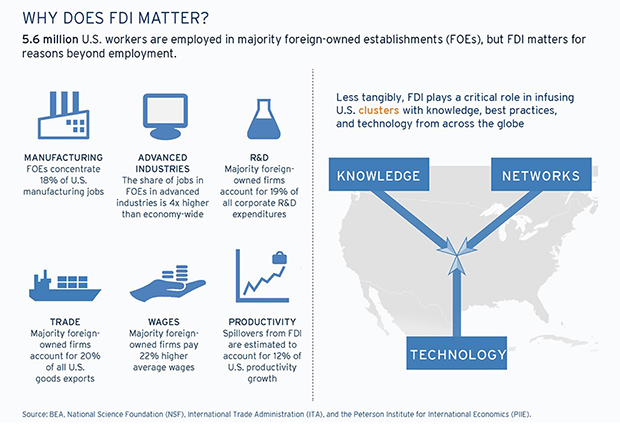 FDI via mergers and acquisitions offers a distinct set of micro-level benefits too. Such transactions can provide needed capital for expansion and technology development. Productivity, job quality, and management practices all improve. Exports often increase with access to the parent company’s international distribution network, and local outlooks become global.

Finally, FDI matters for important but less tangible reasons of global engagement. In a world where competition is increasingly global and innovation can happen anywhere regions need to engage actively and directly with the global economy not only to get ahead, but also to prevent falling behind. FDI plays no small part in integrating U.S. regions into global networks. And with 85 percent of global growth through 2019 projected to occur outside the United States, global engagement means big opportunity.