The Friday jobs report was decent in spots and prompted some relieved commentary. Plenty of headlines touted that the U.S. private sector had crossed an important milestone by at last regaining the jobs lost in the Great Recession.

However, a number of writers were right to point out that the big “milestone” was pretty deceptive. Many noted that total payrolls remain more than 400,000 below their prior peak due to cuts in the number of government workers, especially at the state and local level. And of course the Hamilton Project’s tracker confirms that the U.S. job market is nowhere close to fully recovered on a per-capita basis considering population growth since the crisis.

But if that isn’t enough to temper the enthusiasm, we feel obliged to note that last week’s Metro Monitor provides an additional counterpoint.

According to the Monitor’s read out on metropolitan-area conditions, no less than 61 of the 100 largest U.S. metro areas are still below pre-recession peak jobs levels as of the end of 2013 (see map). The picture is pretty stark, with many of the metro areas hardest-hit by the recession still far from pre-recession employment levels. 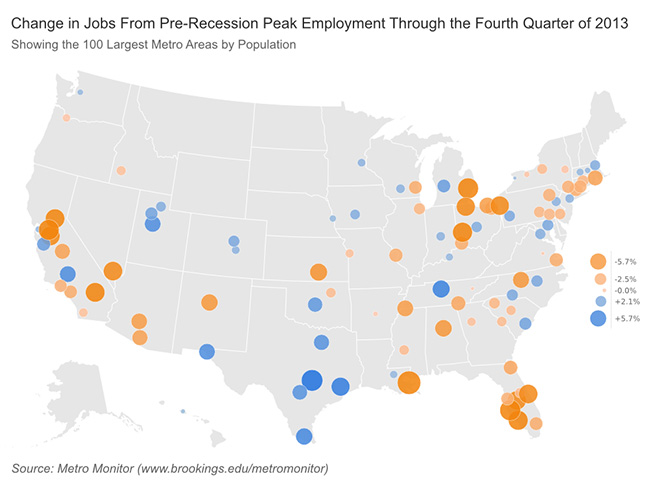 The gap remains especially severe in parts of California, Florida, the Mountain West, and the industrial Midwest where housing markets collapsed and/or manufacturing contracted. Of the places that are more than five percent below pre-recession peak (23), there are five in California; four in Florida; four in Ohio; and another five spread across the states of Arizona, Nevada, Michigan, and New Mexico. The largest of these metro areas that remain far from recovered include metropolitan Cleveland, Detroit, Riverside, Las Vegas, and Phoenix.

In sum, the damage done by the Great Recession is far from repaired, especially when looking beyond the national trend at metropolitan area economies.