“As Ohio goes, so goes the nation,” is a maxim of presidential politics. Given the importance of the auto sector to U.S. production, an economic rephrasing might be, “As auto production goes, so goes manufacturing.”

So, what’s the health of the auto sector, beneath the headline numbers of increased sales? Our new report on the industry in Tennessee focuses on one state but has relevance to national discussions.

First, the geography of the North American auto industry employment has changed substantially over the past two decades. For its part, the Midwest’s share of automotive employment contracted from a high of 42.8 percent in 1996 to a new low of 29.7 percent in 2012. Meanwhile, as jobs have moved out of the Midwest, an increasing share of auto employment has flowed to southern states—particularly Tennessee. And yet that is not all, as the graph nearby shows. Over the same period, Mexico has gone on a tear and increased its share of North American automotive employment by over 50 percent. Since 2010 employment in Mexico’s auto sector has grown at an average rate of 13.7 percent a year. Soon Mexico will account for more than half of North America’s auto manufacturing. 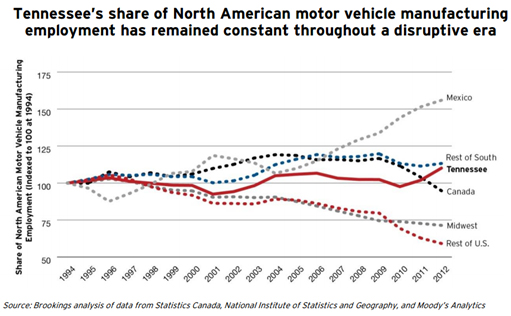 Following two decades of major change, what will the coming decade look like for the North American auto industry? A hint comes from wage trends.

Over the last decade all U.S. states have seen pay rates converge, given benefit structure adjustments required by the federal bailouts, union concessions, and the increasingly widespread use of temporary contract workers. Such trends will only increase in the aftermath of Michigan’s decision to declare itself a right-to-work state. Indeed, our research shows that by 2012 pay in all states save Michigan—the knowledge and management hub of the industry—had converged to an average yearly compensation rate of between $53,500 and $63,500 for motor vehicle and related manufacturing workers.  Mexican wages remain a fraction of those in even the lowest-wage U.S.

In the future, no U.S. state is going to be able to depend solely on low wages as its chief source of comparative advantage. This is of particular concern to Southern states which, in the past, have leveraged low wage structures to increase their share of the continent’s auto sector. Now, that may need to change. Over the coming decade Southern states will be challenged by, on the one hand, Midwestern states that have roared out of the recession with leaner production platforms and more efficient wage and cost structures, and, on the other hand, by an increasingly sophisticated Mexican automotive sector that continues to grow at a breakneck pace and maintains substantial and sustainable wage advantage. 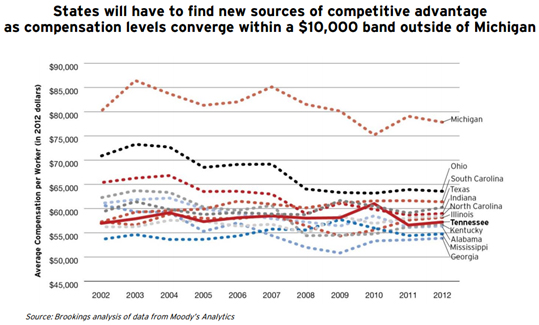 Simply put, the era of wage arbitrage is over for automakers and their U.S. suppliers. Soon all states will converge around comparable wage rates and no state will be able to compete with Mexico on labor costs alone. That means that American states and regions will need to get smarter now and find new ways to compete.

Our suggestion: Foster the excellence of local supply chain coordination, cultivate a stellar workforce, and ramp up technology development. These are going to be the new determinants of local advantage in a changing auto sector.