For three years now the Mountain Monitor — Brookings Mountain West’s Mountain Zone variant of Brookings’ MetroMonitor — has been tracking the region’s protracted, in-most-places anemic, economic recovery. Quarter-to-quarter, the Monitor has reported on a slow healing of the region’s metropolitan economies that has differed starkly from the region’s past boom-bust cycles.

Now, though, that reporting is continuing, albeit in a new, web-based interactive tool presenting data through the first quarter of 2012.

The new web-based tool provides not only a more interactive way to track trends in U.S. metropolitan areas but also significantly more and better information,  including industry dynamics and richer visualizations of each metro area’s economic recovery. 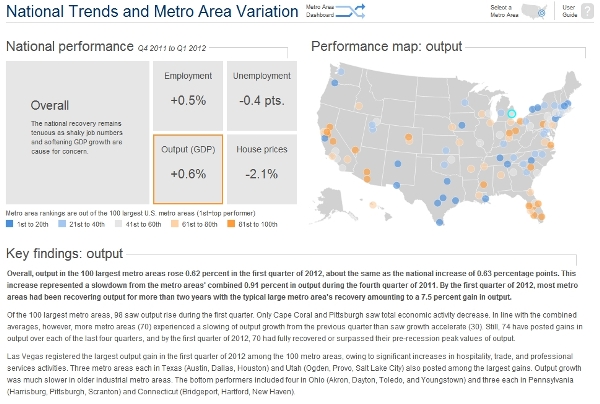 As to what the new Monitor reveals, one insight is that the Intermountain West looked pretty good in the first quarter of the year (all things being equal).

The region’s recovery gained momentum on both jobs and output indicators over the quarter even as the rate of decline in unemployment slowed and house prices dipped. On all fronts the region outperformed the nation, which saw slowing advances on all four indicators.

One group of metros is leading the national recovery–serving the region’s historical role.  Most notably, Denver rose rapidly in the economic rankings thanks to considerable job growth–a 1.3-percent increase in employment over the quarter, which ranked fifth nationally. Utah’s consistently strong metros, for their part, added jobs and expanded output once again. Las Vegas, for its part, led the nation on quarterly output growth as production expanded by 1.6 percent, led by leisure and hospitality and a range of services, even while the metro area’s nascent jobs recovery lost ground. Meanwhile Boise’s mild 0.2 percent decline in house prices was among the nation’s smallest; improving housing market conditions continued to buoy Phoenix’s overall recovery as well.

And yet for another group of metros the news was generally worse in the first quarter. Albuquerque, Colorado Springs, and Tucson all languished in the bottom quintiles of their peers on the Monitor’s measure of overall recovery, as did Las Vegas.  Successive quarters of output growth in Albuquerque had yet to translate into jobs, and the unemployment rate there actually increased in early 2012. Colorado Springs’ fledgling recovery stagnated in the first quarter too, with employment levels holding flat, the unemployment rate increasing slightly, and output growing at pace with the national economy.  House prices in Albuquerque, Las Vegas, and Tucson fell to new lows.

Along lines like these, then, the Monitor in its new form looks under the hood of the national recovery to reveal significant variation at the regional and metro levels. Let us know what you think.