Now that both House and Senate Republicans have passed their earmark ban, what kind of impact would a binding moratorium have?

The map shows the location of the 6,373 earmarks contained in 2005’s Safe, Accountable, Flexible, Efficient Transportation Equity Act: A Legacy for Users (aka the highway and transit bill). While it may appear there is some concentration in certain places, only about half of the total funding from these earmarks goes to the 100 largest metropolitan areas, home to two-thirds of Americans and producers of 75 percent of GDP. 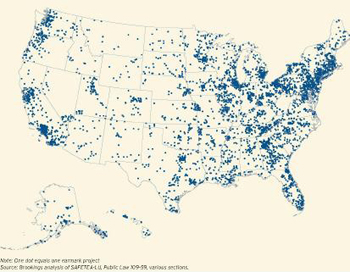 It should not come as a surprise that only 12 members out of 515 voted against the bill.