The nation as a whole seems to be in a tentative, fragile–and jobless–recovery. Although GDP is growing, employment is still falling, and payroll employment in the last quarter of 2009 was still 4.9 percent below its level of the last quarter of 2007, when the Great Recession started. While jobless recoveries are now commonplace, this one isn’t the same old jobless recovery. It’s worse–worse than the recovery from any of the previous three recessions. Two years after the start of the 2001 recession, jobs were down 2 percent since the recession began. Two years after the 1990-91 recession started, they were down by less than 1 percent. Two years after the 1981-82 recession began, they were less than half of 1 percent below their level at the start of the recession.

Cape Coral (Florida) and Buffalo illustrate just how different the recovery has been in different places. Two years after the beginning of the Great Recession, Cape Coral had 14 percent fewer jobs than it had when the recession began. Two months after each of the three previous recessions, in contrast, it had either recovered almost all the jobs it had at the start of the recession or actually gained jobs. Probably because Cape Coral had not previously suffered an economic shock as severe as its recent housing bust, its current economic recovery is a lot more jobless than its past recoveries.

In Buffalo, in contrast, the current recovery is only slightly jobless, with employment down by only a little over 2 percent from its level of December 2007. This is just barely worse than the recovery two years after the beginning of the 2001 recession and a lot better than the two-year recoveries after the 1991-91 and 1981-82 recessions. Why the improvement? Buffalo’s economy was probably more sensitive to the business cycle in the 1980s and 1990s, when the region had many more steel- and auto-related manufacturing jobs than it does today. The loss of many of those jobs made Buffalo more dependent on less volatile industries, such as higher education, so recessions don’t cost as many jobs as they used to. Losing all those high-paying steel and auto jobs was, on balance, bad for the region, making it poorer, smaller, more unequal, and probably less innovative. But it had a little bit of a silver lining. 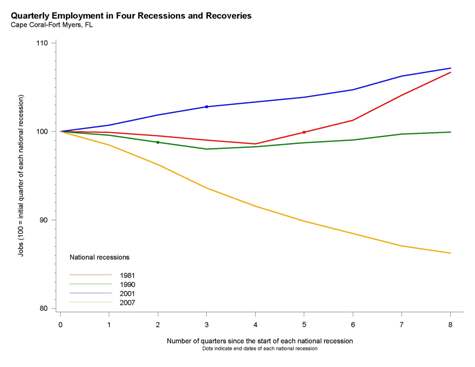 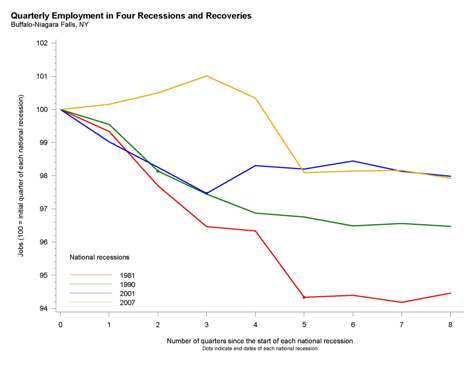