The U.S. government spent 75.6 billion dollars on IT projects in 2014. That is enough to save the world and still have 600 million dollars to spare. Considering the increasingly important role of information technology in the relationship between government and citizens, these investments are not outrageously large. If performed successfully, IT investments will improve the efficiency of government agencies and facilitate the interaction between government and public. However, government’s IT projects most often fail miserably. According to The Standish Group’s report, from 2003 to 2012, only 6.4 percent of federal IT projects with $10 million or more in labor costs were successful. Projects like the healthcare.gov website seem to be very easy to implement, yet despite their political importance, they are often over budget and off schedule. The U.S. government is not alone in mismanaging its IT projects: countries such a United Kingdom and Australia have had their own share of failures in IT projects. What is about government’s IT projects that makes them so prone to failure and how can they be better managed? 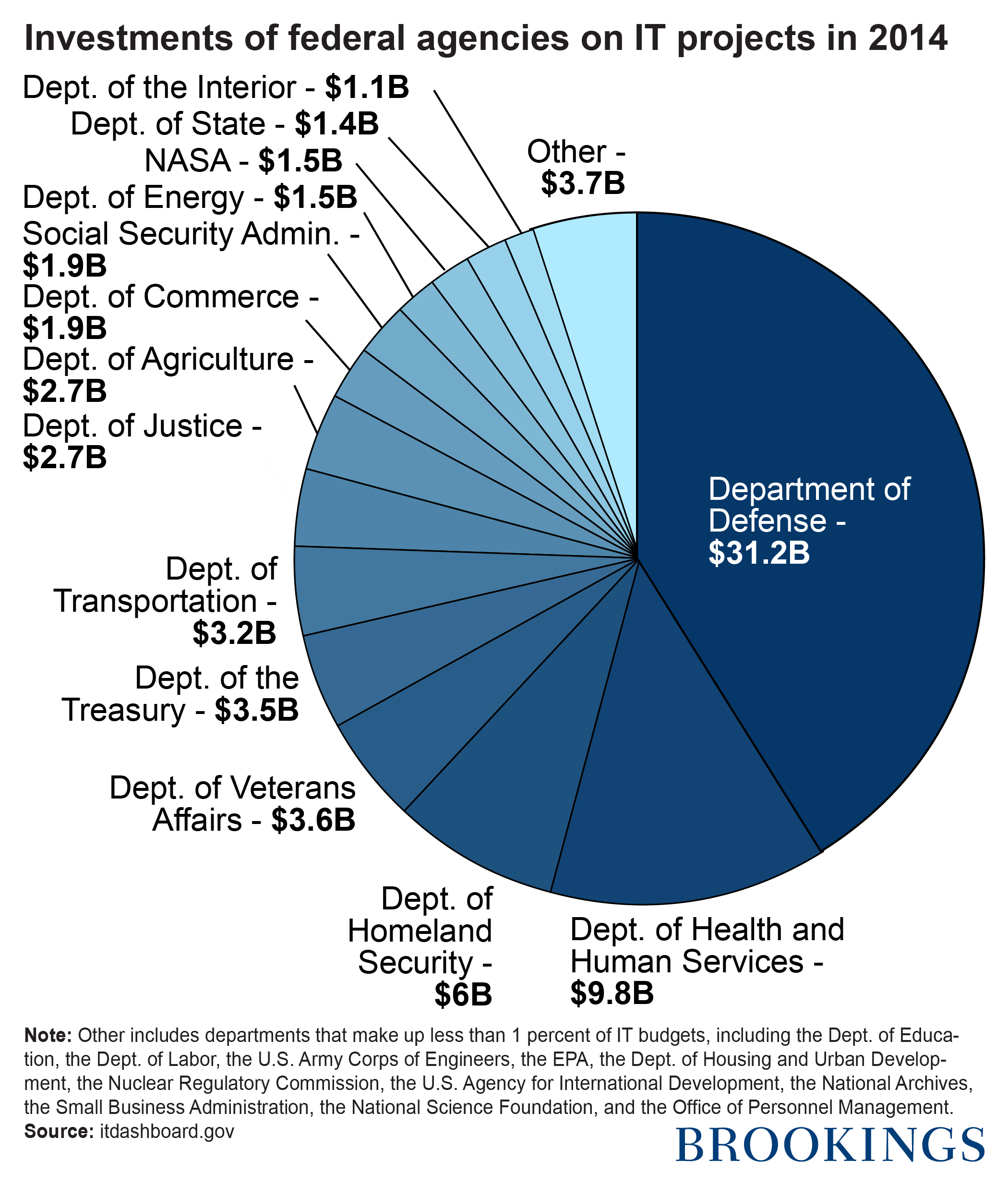 Project size: The U.S. Government is a massive organization and most of its projects are inherently massive as well. Building airports, subway systems, and underground highways are megaprojects that each cost tens of billions of dollars. The challenges with managing these projects increase with their size and so does their risk of failure. The private sector knows this fact very well. Market reaction to outsourcing announcements is inversely related to the size of an outsourcing contract. Public companies experience a drop in their stock prices simply because the market knows that these projects are risky and likely to fail. The reason that government IT projects often fail is not always incompetence in management, but also the fact that government assumes all of the involved risk. These necessary projects will greatly benefit both the government and the public if delivered, but the private sector neither has the means nor the will to undertake these projects. Government is left with no choice other than to bear the risk itself, despite the fact that these projects often fail. As a 2006 Defense Acquisition Performance Assessment report puts it, Government’s “Conspiracy of Hope” understates costs, risks and technical readiness, leading to programs that are not executable within initial estimates.

Legacy systems: The majority of government IT systems were developed decades ago and have not been updated since. Just like an old car, maintaining these systems becomes more expensive as time goes by. Seventy percent of government’s IT budget is spent on maintaining legacy systems, some of which still run Common Business-Oriented Language (COBOL), a programming language first developed in 1959. Many times, implementing more efficient and less expensive IT solutions is not feasible simply because these new systems cannot communicate with legacy systems. The private sector can routinely update its IT systems because they are usually smaller and hold less sensitive information. Modern IT systems are a luxury that enables the private sector to manage new IT projects over a shorter amount of time and at a lower cost than the public sector.

Multiple stakeholders: Due to the complex and inter-connected nature of the government, even small projects have multiple stakeholders across different agencies. Consider healthcare.gov, a simple web platform whose primary stakeholder is the Department of Health and Human Services. To correctly determine the eligibility for insurance subsidies, multiple agencies had to coordinate their information systems with healthcare.gov. Internal Revenue Service should have provided income verification, while Social Security Administration and the Department of Homeland Security should have verified citizenship status of the applicants. Hierarchical structure makes it very difficult to coordinate multiple government agencies with different preferences, priorities, and capabilities. Another example is the joint efforts between the Departments of Defense and Veterans Affairs to establish interoperability between their electronic health records systems. The two government agencies failed to achieve interoperability even after spending four years and $1 billion. Valerie C. Melvin, Director of Information Management and Technology Resources Issues at the U.S. Government Accountability Office, attributes this failure to a lack of coordination between the two agencies and “inadequate program management and accountability”.

Lack of business incentives: IT projects in the private sector are initiated as a result of market competition. Personal preferences and political considerations play a negligible role in private sector’s decisions, but this is not the case for government’s IT projects. Political consideration may play a more salient role when making a decision to start a project or prevent early termination of unsuccessful projects. Starting a project is often more important than finishing it; officials take credit for ambitious initiatives that would take longer than their tenure. As they leave office, the project becomes someone else’s problem. While the very existence of private companies may depend on the successful implementation of an IT project, government agencies will never go bankrupt or get defunded as a result of project failure. Individuals who design and manage IT projects in private sector are closely monitored by the industry since the success or failure of these projects determines their future career paths. On the other hand, the individuals in the federal government often go unnoticed, giving them fewer personal incentives than their counterparts in the private sector.

Break large IT projects into smaller ones: Unlike other types of projects, it is quite possible to break the IT projects into smaller projects and reduce the risks associated with project size. Modern management methodologies such as agile method are specifically well suited for IT projects. While the traditional project management methods follow a sequential process in implementing each phase of a project, the agile method follows an incremental approach. A large IT project is broken into smaller modules with specific project deliverables. The team focuses on one module at a time and delivers results in a shorter schedule.

Transfer risks: Currently, the relationship between government and its IT vendors are through time-and-material contracts. The government pays the IT vendors based upon the time spent by their employees and their subcontractor’s employees to perform the work. In these contracts, the government bears all the risk while vendors gain access to an unlimited source of revenue from taxpayer dollars. That is why Cerner’s stock price jumped by 7.2 percent on July 29, its highest jump in nearly two years, after it received a $4.3 billion contract to create an electronic health records system for the Department of Defense. With these contracts, the projects will almost always be over budget and off schedule as contractors have clear incentives to bill the government as much they can. As I argued before, the government has no choice in signing time-and-material contracts since private sector cannot perform these projects. However, if large projects are broken down into smaller ones, then it will be easier to sign fixed-cost contracts in which the government pays contractors only after the project is delivered. In these contracts, all the risks are transferred to the contractors, giving them an incentive to perform the project within its schedule and budget.1

Become more transparent: I applaud the government’s efforts towards transparency. We can monitor the progress of government’s IT projects through ITDashboard.gov. These efforts should be continued and expanded to IT personnel across government agencies. The federal employees who managed successful IT projects within the scheduled time and budget should be recognized and appreciated. More importantly, the lessons learned from project failures should be documented and turned into procedural policies so that agencies can avoid similar mistakes in the future. Regular reports about the success or failure of the project to the public can also create a business incentive for IT vendors to improve their performance on government projects.

Attract better talent: While the federal government can never compensate its personnel as generously as private sector, it can provide unique opportunities that can attract many brilliant minds. The unique challenges and resources present in government work lure talented developers, top executives, and successful entrepreneurs from Silicon Valley to Washington DC. Establishing positions like Chief Technology Officer and Chief Data Scientist as well as the Presidential Innovation Fellows program were brilliant decisions that helped the Obama administration build a strong relationship with the technology industry. These efforts should be expanded, and private sector talent should be deployed to other federal agencies as well.

TechTank Podcast Episode 61: What to expect for big tech, broadband, anti-trust, and other tech issues under the new Congress