In 2009, Congress included a provision in the American Recovery and Reinvestment Act that directed the Federal Communications Commission to develop a National Broadband Plan (NBP). Congress wanted the plan to include strategies for using broadband to promote, “consumer welfare, civic participation, public safety, and homeland security, community development, healthcare delivery, energy independence and efficiency, employee training, private sector investment, entrepreneurial activity, job creation, and economic growth, and other national purposes.” Recently several experts gathered at a Brookings Institution event to analyze the progress that the U.S. has made since the NBP’s development. 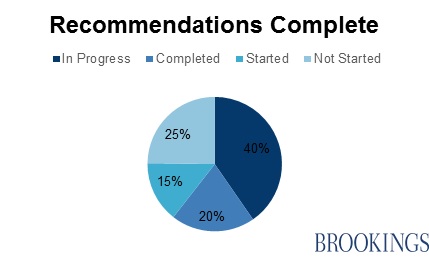 The federal government and its private partners have done a lot of work over the past five years since the NBP was implemented. The Benton Foundation, which tracks the NBP, finds that out of the 218 recommendations included in the plan about one fifth have been completed. They also find that work has not begun on about one quarter of the recommendations. This measure provides some perspective on the NBP’s implementation, but also treats each recommendation as equally important.

Progress on more efficient use of spectrum

The panelists agreed that in general the federal government had major successes around the use of spectrum. Spectrum auctions that transferred little or unused spectrum bands from the public to the private sector were one major area of improvement. The NBP also called enabling the use of “TV white space” for wireless broadband, which went into effect a few years ago. There is also more unlicensed and shared spectrum then before the development of the NBP.

Incumbents like AT&T, Comcast, Verizon and others are now competing with new entrants like Google Fiber. In the markets where competition has increased there have been big benefits for consumers in terms of faster speeds for lower prices. The Gig.U project also leads university based partnerships to provide lightening quick and cheap Internet access to whole communities.

The NBP is a good starting point, but much more work remains because it’s impossible to declare that the mission was accomplished. The plan includes the aspirational goal of providing 100 million American households with 100 megabit per second connections by 2020. Achieving success on that level will require a renewed effort including further investments in Internet infrastructure and carefully designed regulatory policies.