President Barack Obama’s sixth State of the Union Address (SOTU) was his first to Republican controlled Congress and comes at a time when his popularity is on the upswing. In this penultimate SOTU the President laid out the arguments for the legislative changes he will pursue before lame duck politics come into effect. He highlighted several technology policy proposals ranging from cybersecurity, broadband Internet access, and net neutrality.

The President has argued that high-speed internet access is an essential utility akin to electricity. For most Americans the availability of broadband Internet is necessary to get important medical information or to start a business. The Department of Commerce and the Department of Agriculture have worked to provide blazing fast fiber-based Internet connections to metropolitan and rural areas all over the country. The president has trumpeted his administration’s efforts to make it easier for private and public organization to invest in next generation Internet infrastructure. 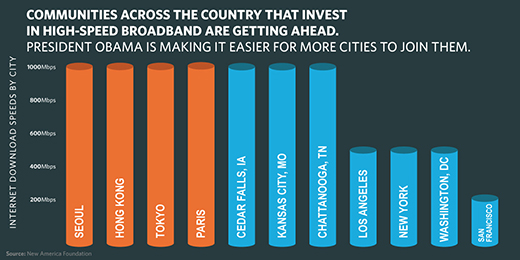 In the wake of the Sony hacks, the president reiterated the importance of addressing potential cyberthreats. The strength of the country’s cybersecurity infrastructure is key to ensuring that America maintains a strong national defense in the 21st century. The president described several potential reforms to prevent further attacks. Administration officials have argued its necessary to improve cybersecurity information sharing between relevant public and private organizations. He urged administration officials to update cybersecurity laws. Administration sponsored bills simplified the prosecution of cyber criminals instituted stronger data breach reporting rules. These laws require companies to inform customers when a breach occurs or if their personal information has become vulnerable to malicious parties.

The President also waded into the complex politics of net neutrality. President Obama said, “I intend to protect a free and open internet.” He has encouraged the Federal Communications Commission (FCC) to reclassify consumer broadband service under Title II of the Telecommunications Act, while eschewing direct price regulation. The President’s vision for Net Neutrality focused on new rules from the FCC and did not involve legislation from Congress. Courts recently affirmed the agency’s authority to use Title II regulation, but this approach may anger Congressional Republicans who could pursue legislation to reflect their views.

Previously TechTank has covered how technology policy has to potential to serve as an area of bipartisan agreement. The proposals to expand broadband through increasing competition and removing regulatory barriers are especially promising as potential areas of compromise with Republicans. The SOTU is encouraging because it suggests that the President agree with this political analysis and may reach across the aisle in the coming months.