Internet access has grown rapidly over the past decade and brought the benefits of the information revolution to every corner of the globe. But, a staggering number of people lack Internet access. A recent report from McKinsey & Company finds that 60 percent of people worldwide remain unconnected. Further action is needed to remove barriers to Internet access. 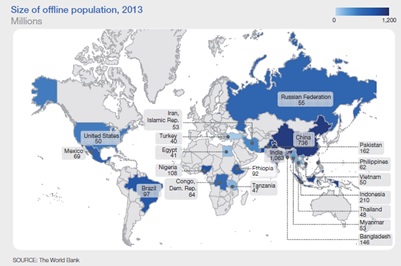 If current projections hold, 500 million to 900 million people will gain Internet access by the year 2017. Despite this trend, this will leave 4.2 billion people offline. Nonprofits, governments, device manufactures, and service providers will need to work together and innovate to tackle this pressing problem. The Internet will only increase in its importance for commerce, education, and communication. All people deserve access to the benefits of the Internet.